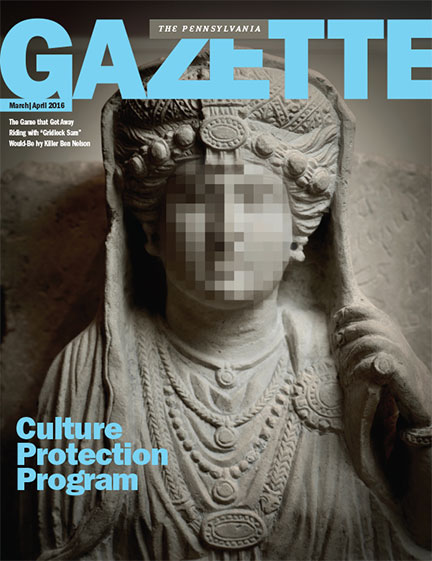 The Small, Good Stories
The Penn Cultural Heritage Center was launched to provide a forum for an “intellectual discussion” of the meaning of heritage and the role of communities in preservation efforts. Then came the Syrian civil war and the rise of ISIS. By Jamie Fisher.
Plus: Teaching art to Syrian and Iraqi refugee children in Jordan. By Melissa Croghan

March Madness Missed
What’s more frustrating than playing Ivy League men’s basketball in the same era as Bill Bradley? Winning the University’s first official Ivy championship the year after he graduated, and then being kept out of postseason play because of a fight between the League and the NCAA. Fifty years later, Penn’s 1965-66 squad still wonders what might have been. By Dave Zeitlin

That Roosevelt
Penn Law professor, legal scholar, and novelist Kermit Roosevelt III is doing his best to live up to the family name—including, in his latest book, by tackling cousin Franklin’s executive order authorizing the confinement of more than 100,000 Japanese Americans in internment camps during World War II. By Julia M. Klein

Readin’, Writin’, Revolution
With the Minerva Project, Ben Nelson W’97 is out to “build the world’s greatest university from scratch.” Should Penn—and other top-tier schools—be worried? By Alyson Krueger

NOTES FROM THE UNDERGRAD Parts of speech

ALUMNI VOICES Gerald’s story, and mine

ELSEWHERE “That old promise of bliss”

Hill House to get $80 million renovation

Sam Mattis’ Olympic hopes; women’s lacrosse is “on a mission”

PHOTOGRAPHY Barren campus. Without Regard to Sex, Race, or Color