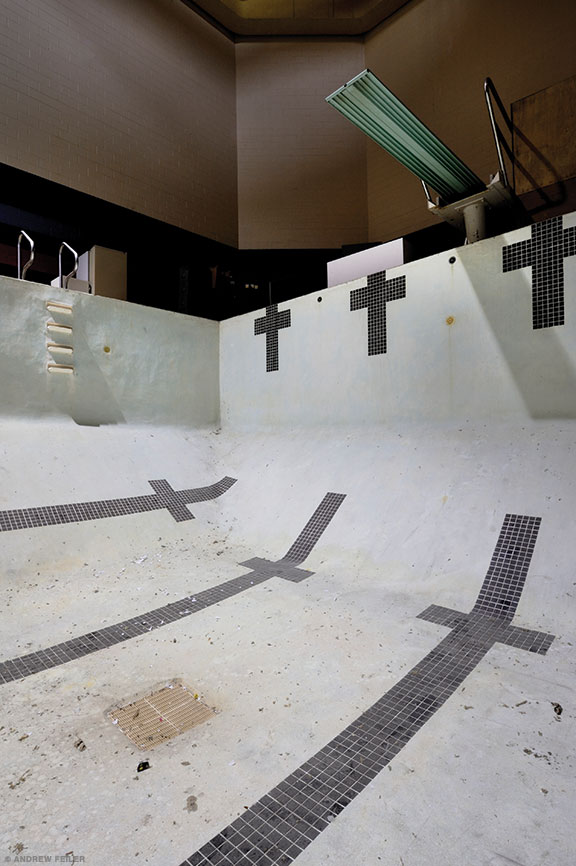 WITHOUT REGARD TO SEX, RACE, OR COLOR:
The Past, Present, and Future of One Historically Black College
Andrew Feiler W’83
University of Georgia Press, 2015, $32.95.

On the cover of Without Regard to Sex, Race, or Color , a plain wooden desk sits naked and forlorn, shunted into a corner where it serves to catch bits of crumbling plaster. An empty drawer totters on its rails, another is completely missing; so too are the pens and paper that might normally roost here.

The tableau is one of many “emotional touch-points” that photographer Andrew Feiler W’83 identified as he roamed the corridors of Gaines Hall, an abandoned dormitory at Atlanta’s Morris Brown College, soon after the school was forced to sell almost all of its physical assets to stave off bankruptcy. “When you start out on a project like this, you’re not entirely sure of the visual narrative,” he elaborates. “But as I walked past these classrooms, labs, and locker rooms, I realized that the spaces are so familiar. All of us have experienced them—but we’re used to seeing them populated by students and teachers.”

The 54-year-old Feiler, a fifth-generation Savannahan, was not unfamiliar with the legacy of Morris Brown.

“There’s 20 years of my own civic capital invested in this project,” he says, noting that he had frequently rubbed shoulders with past presidents of the school while serving on area boards. When Feiler was ready to pitch his photography idea to the school, for example, he prevailed upon Sonny Walker, a fellow board member of Public Television Atlanta and a lion of the civil-rights movement who served as vice chair of the Morris Brown board of trustees, for an introduction to the current president.

One of the few historically black colleges and universities (HBCUs) to be founded by African Americans, Morris Brown College opened in 1885. Named in honor of the freed black who became the second bishop of the breakaway African Methodist Episcopal Church after he established a congregation in Charleston, the school was originally located in a residential area of Atlanta. Repeated financial travails led it to move in 1957 to Atlanta University Center, a strength-in-numbers coalition on the other side of town that included Spelman and Morehouse colleges. Though the school flourished for a time, the swelling civil-rights movement weakened the relevancy of HBCUs. Eventually new financial mismanagement and improprieties sealed the school’s fate.

By the time Feiler arrived with camera in hand, he found a barren campus of just three buildings occupied by about 40 students. Seeing the spaces devoid of life was “tragic,” he says.

While the resonance of the 60 images he chose for the book—rows of empty chairs, busted windows, a drained swimming pool, a cache of keys—elevates them above the merely voyeuristic, Feiler acknowledges the aesthetic appeal of the absence and decay they portray.

“Certainly there’s an artistic aspect to the work,” he says. “I’m looking for images that not only contain a story but are visually compelling. Architecture, after all, has a way of showing time—through styles, but also in the sense that buildings get dirty and fall apart if they’re not maintained.” The cover shot, he continues, “speaks to that intersection of art and story. It has simplicity—the triangle of the ceiling mirrors that of the floor corner—but there’s that empty drawer. It was open when I walked in and it offered an overt statement about the absence of people and the presence of ghosts.” 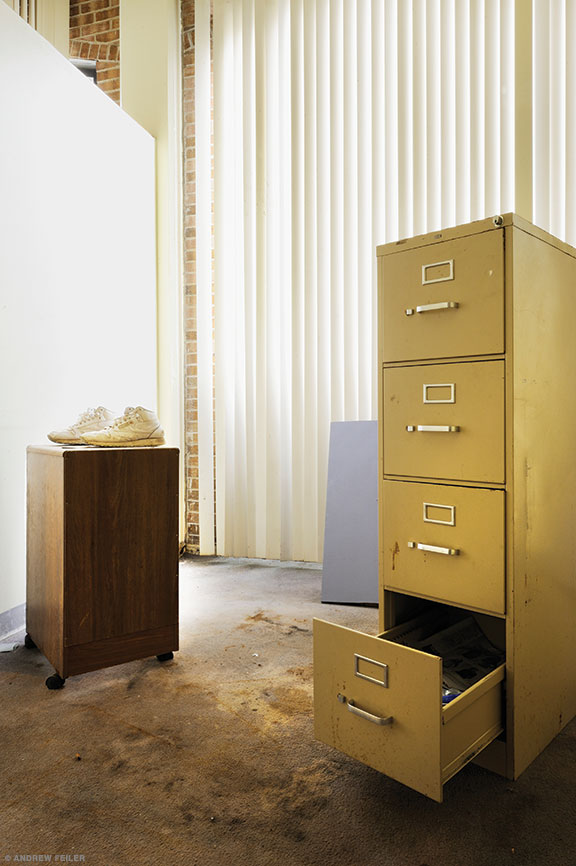 This, from a guy whose admission essay for Penn was about a photograph that he had made of the rusting side of a building and how such deterioration could be beautiful. He was serious enough about photography by then that he thought his enthusiasm would serve as evidence of his diverse interests. Majoring in economics at Penn, though, he set off on a path in management consulting, picking up an American-history degree from Oxford and an MBA from Stanford along the way but eventually leveraging his expertise in strategic planning to help out on a variety of nonprofit boards in Atlanta.

In doing so, he was following in the footsteps of his parents—who, he says, “set for my generation a wonderful example of civic engagement. They co-founded Leadership Savannah; my mother was the first female president of Mickve Israel, which was founded in 1733; and she served as director of the Telfair Museum.” But Feiler says he always had a love-hate relationship with the South, wandering the world after graduating from Penn before returning in the mid-1990s to Atlanta. “Ultimately, what brought me back was my appreciation for the richness and complexity of Southern culture,” he says. “My voice as a photographer has been shaped by its notions of history and justice and race and progress, as well as by being a minority—Jewish—in the South myself. In a larger city like Atlanta, I thought I could partake in the necessary battles to make my community a better place.”

Thumbing through his book, he pauses at another image. The photo positions the viewer behind a shattered window that frames a boarded-up archway leading to Sara Allen Quadrangle. A sign to one side offers a silent comment on the sad state of HBCUs. It reads: “Have you forgotten your I.D.”

This part of the campus has since been torn down—as has Gaines Hall, the dorm whose image adorns the book’s cover. Such disinvestment and financial shenanigans continue to plague many other HBCUs.

“At this point, many of these campuses are perishable historic resources,” observes Feiler. “I hope my photos of Morris Brown can serve as an imperative to preserve what we have left.”