Identity and Other Thefts 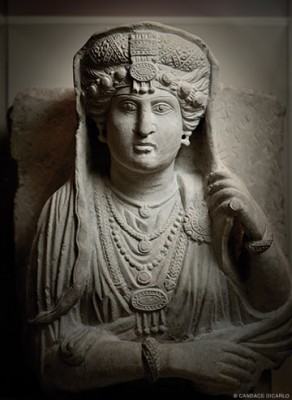 The artifact on our cover—a funerary sculpture from third-century CE Palmyra in modern-day Syria—doesn’t actually need protection. It’s safe and sound in a gallery of the Penn Museum. But we hoped it would be a compelling way to symbolize the Penn Cultural Heritage Center’s efforts to help communities preserve their cultural materials and identity in the face of Syria’s civil war and the rise of ISIS. As readers of freelancer Jamie Fisher C’14’s cover feature, “The Small, Good Stories,” will see, the pixilation of the cover matches the identity-concealing treatment given to the volunteers shoring up a mosaic in Syria, which most definitely was needed.

Researching the sculpture on the Museum’s website, I found an old article from its magazine, Expedition, that provided a disorienting shock in light of Palmyra’s leveling by ISIS. It breezily noted that the site was “one of the Syrian Arab Republic’s most popular tourist attractions, a short, and hopefully air-conditioned, trip from Damascus.”

The article also addressed the “problems of provenance” of the Museum’s Palmyrene objects, and suggested that some were acquired improperly back in the 1880s. That put me in mind of a point made by PennCHC’s Katharyn Hanson, that the looting and sale of antiquities—by people just trying to survive as well as terror groups—is as much a part of the current crisis as the spectacular acts of destruction that generate headlines and outrage.

I’m not sure what to make of that, although I suppose we can be happy that the objects are here now. It’s the kind of nuanced issue that the CHC—originally envisioned as a more purely intellectual endeavor—could profitably wrestle with, if and when conditions in Syria and Iraq become less desperate. Until then, the focus will remain on triage.

Also in this issue, frequent contributor and Gazette sports columnist Dave Zeitlin C’03 digs into a mostly forgotten incident from Penn hoops history in “March Madness Missed”: the time the Ivy champion 1965-66 Quakers were robbed of their NCAA playoffs berth when the Ivy League—and most emphatically Penn’s athletic director, Jerry Ford C’32 G’42—refused to comply with a rule setting a minimum GPA for student-athletes.

That kind of dispute could never come up at Minerva, Ben Nelson W’97’s disruptive higher-education startup. Nelson’s brainchild has no sports teams, no clubs or campus institutions—no campus, really. All classes are held online and students are expected to shuttle among various world-class cities while earning their degrees. In “Readin’, Writin’, Revolution,” Alyson Krueger C’07 lays out Nelson’s plan to “build the world’s greatest university from scratch,” and how he came up with the idea at Penn.

Throughout his long career in government and the private sector, transportation engineer Sam Schwartz GCE’70 has battled against the view that cars should rule the road. In “Street Fighter,” associate editor Trey Popp maps Schwartz’s progress from a Brooklyn childhood, to fame as “Gridlock Sam” and head of the New York DOT in the 1980s, to his latest transportation plan for the region, Move NY. (For good measure, Schwartz weighs in on ride-sharing apps in our “Expert Opinion” essay.)

Finally, Julia M. Klein’s story on Kermit Roosevelt III, “That Roosevelt,” touches briefly on the fact that the Penn law professor and novelist’s grandfather, a CIA agent, engineered the coup that put the Shah in power in Iran. But Roosevelt’s recent novel, Allegiance, tackles another controversial act by a more distant relative—FDR’s decision to confine 100,000 Japanese Americans in internment camps during World War II—while also delivering a murder mystery and love story.