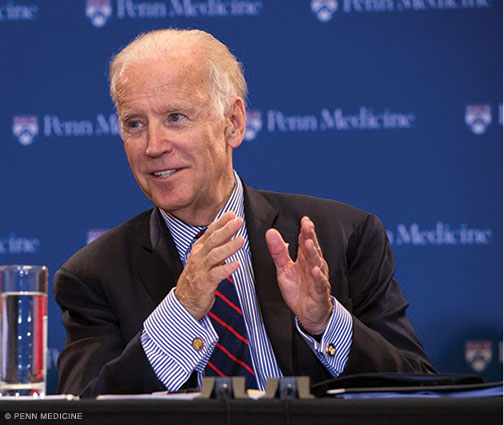 Three days after President Barack Obama announced during his State of the Union address that he was putting Vice President Joe Biden Hon’13 in charge of a “moonshot” initiative to end cancer, the vice president came to Penn’s Abramson Cancer Center to formally kick it off. Flanked by President Amy Gutmann and NIH Director Francis Collins, Biden spoke extemporaneously and passionately about his motivations, and presided over a brief roundtable discussion with an assortment of Penn Medicine doctors and researchers.

After his oldest son, Beau Biden C’91, died of brain cancer last May at 46, Biden dedicated himself and his office to the fight against cancer for the rest of his term. “From my exposure to over two years of my son fighting Stage 4 glioblastoma of the brain, I became acquainted with the brilliant minds around this table—and others—to realize that we’re on the cusp of some phenomenal breakthroughs,” he said.

That doesn’t mean “we’re going to cure all cancer and we’re going to do it tomorrow,” he added. But “whatever breakthroughs we could make in 10 years, my goal is to make sure we can do it in five years.” He called for less “stovepiping” of information and more sharing. He also referenced immunotherapy, and specifically the work of Carl June, the Richard I. Vague Professor [“The T-Cell Warriors,” Mar|Apr 2015]. “We can fundamentally change the life circumstances of millions of people around the world.”

As for why he chose Penn as his launching pad, Biden wryly offered a “full disclosure: My son went here; my daughter went here; my granddaughter’s a senior here; my nephew’s coming here; and my niece is coming here. Other than that, I have no self-interest.” —S.H.