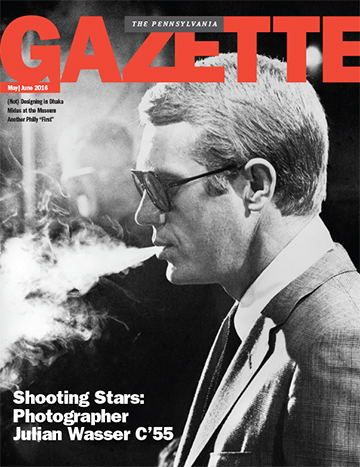 Julian Wasser C’55’s photographic love affair with Hollywood began more than half a century ago. He’s been loving and hating and shooting it ever since.
By Samuel Hughes

Eight years ago, Stephen Kieran GAr’76 and James Timberlake GAr’77 turned their Penn Design senior studio upside down. They demoted design in favor of research, gave aesthetics a back seat to social science and data analysis, and took all their students to Bangladesh.
By Trey Popp

Beyond the Golden Touch

There’s a lot more to King Midas than history’s most celebrated case of “be careful what you wish for.” Drawing on decades of excavations at Gordion in modern Turkey, a blockbuster exhibition at the Penn Museum illuminates the world of ancient Phrygia’s greatest ruler.
By Julia M. Klein

NOTES FROM THE UNDERGRAD  The comforts of home

EXPERT OPINION  “Enlightenment is for anyone”