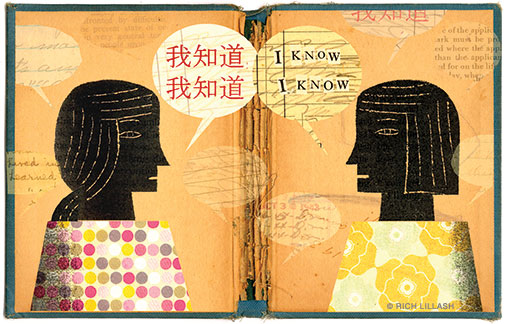 On sincerity, spontaneity, and the distance between Singlish and English.

Rebecca Tan | Drunken speech is always funny, but this was something different altogether.

Two weeks into freshman fall, one of my friends from Singapore came knocking on my door at midnight. He had a dopey smile on his face and the transcendent serenity of a person fully resigned to the fact that he would not be attending his morning math lecture.

His speech was high-pitched, enthusiastic, and disarmingly American. I say disarming because this is one of the most Singaporean boys I know. He is serious about his work, uninterested in small talk, and when forced to engage in it, can’t help but slip into the distinctive local slang we refer to as Singlish. Usually I understand him intuitively. But now, listening to him narrate his first fateful encounter with Franzia box wine, I found myself struggling to keep up. It wasn’t just the slur of drunken speech; frankly, all our ears had adapted to that register by the end of orientation. No, it was the dissonance of having this particular boy, this fresh-out-of-the-Singapore-army boy, speak to me in a Valley drawl.

Earlier in the week, we had been discussing the challenges of communication in this country. Some of our peers slipped in and out of accents unabashedly, but the two of us were among those who found the whole affair hideously awkward. Yet it seemed that alcohol did the trick for him: loosening his lips and spirits, giving him exactly the kind of pluck he needed to perform the rise and fall of American dudespeak.

Every international student will surely find this idea of performance familiar. The most difficult thing about speaking in a foreign country isn’t adopting a new currency of speech, but using it as though it’s your own—not just memorizing your lines, but taking center stage and looking your audience in the eye. It is one thing to pronounce can’t so that it rhymes with ant instead of aunt, but a whole other order to do that without feeling like a fraud.

Two years ago, one of my friends left Singapore to attend an international school in Shanghai. She returned with a vaguely American inflection, a kind of slow, methodical drawl that sounded especially conspicuous against the efficient gushing that constitutes Singaporean speech. I remember her telling me how frustrating it was when people asked if she could “turn it off,” like it was a faucet—if she could just erase those two years of her life as though they had left no imprint on her whatsoever. “When you’re alone in a foreign country,” she confided, “all you will want to do is feel like you belong.”

When you’re grappling with things as heavy as loneliness and disconnection—when you have to simultaneously worry about your parents, mid-terms, laundry, and the cost of your education—changing your accent really just feels like survival.

Her words make even more sense to me now. Before coming here, I thought a lot about how I would communicate, but consistently came to the conclusion that my accent was “neutral” enough to be understood. I always enunciated my P’s and Q’s; my syntax was regular; I’d be fine. What I didn’t realize was that the Standard English that I judged myself on—the English I used with teachers, in interviews, in essays—was not the English that explained who I was. Sure, I can articulate a question in class and be understood. But how exactly do I crack a joke in Standard English? How do I express frustration? How do I exclaim something, or comfort someone, without the colloquial resources of Singlish? How can I possibly be sincere?

On the day of Convocation, a Chinese girl from my hall came up to me while everybody was taking pictures. I asked her how the previous night’s frat party—her first—had gone.

“Ah, that’s what I wanted to talk to you about!” she said while taking my arm. “Okay, wait—I’m going to speak in Chinese okay? There’s just no other way to do it.” I nodded with a smile, remarking to myself how adorably serious she was and how much she reminded me of my friends back home.

“It was traumatic,” she told me in Chinese. “All the boys are putting their hands everywhere, and the girls just let them. It’s … it’s … about self-respect, you know?”

I empathized. Not with her horror at brushing against teenage sexuality for the first time, but with what she said about Standard English not being enough to describe the grand, confusing moments of our lives—not being enough to feel true. When emotions run high, when things spin out of control, as they have a way of doing on late college nights, the only way we come close to interpreting what is happening is with the language closest to our hearts.

Perhaps this is why I’ve really come to value the few Singaporeans here at Penn. Whenever I meet them, our accents emerge in their full, unclipped glory. Words fall out of our mouths with little regard to pace, pronunciation, or grammar—keen knives cutting straight to what we want to express. Alberto Rios’s poem, “The Cities Inside Us” conveys this feeling perfectly: We speak words between us that we recognize / But which cannot be looked up. / They are our words. / They come from very far inside our mouths.

Of course, all this is not to say that the Singaporeans here haven’t also perfected an external voice. The immediacy and finesse with which my peers alternate between class pronounced so it rhymes with gloss, and class pronounced so it rhymes with crass, is a remarkable thing to witness. I know now what my teachers meant when they said Singaporeans are an adaptable people.

Lately I’ve been wondering if I’ve taken this whole language situation a tad too personally. Till now, I have kept my Singaporean inflection close at hand, for fear that attempts at Americanisms will be wrong—or, worse, permanent. Yet I am beginning to feel myself grow tired of this stage fright, tired of this senseless preoccupation with the packaging of ideas rather than the ideas themselves. Away from all these theatrics, the simple facts are that I am 9,500 miles away from home, and will be for four more years. I came here looking for change, and the words forming in my mouth to accommodate that change are not jokes, lies, or betrayals. They are real, not strange, and they are mine.

Rebecca Tan is a freshman from Singapore.

Gazetteer
Glee for All