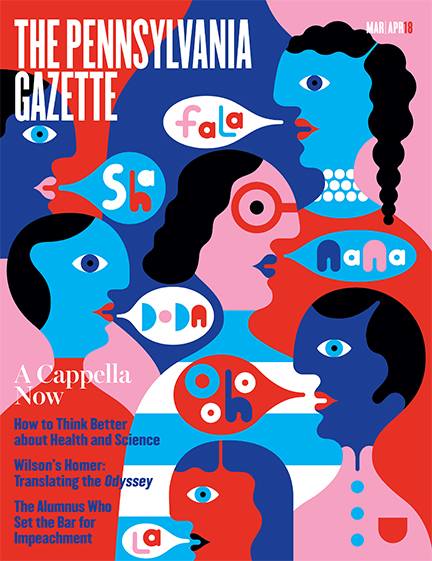 An Odyssey for Our Time
Emily Wilson’s translation of Homer’s epic has become a surprise sensation, a once-in-a-generation transformation of how English readers encounter one of the most iconic characters in all of literature. Fellow classics professor (and Odyssey aficionado) Peter Struck has some questions for her.
Edited by Trey Popp

Confronting Denial
The four Gormans are all Penn alumni and all involved professionally in the mental-health field. In a new book, two of them—daughter Sara and father Jack—take a careful look at the psychological factors driving science denialism and how to counter them. Hint: more data isn’t the answer.
By JoAnn Greco

From the Editor | Song singers and siren songs.

Notes from the Undergrad | A place at Penn.

Elsewhere | “Like the second coming. Or an alien invasion.”

Engineering | $27 million to develop “teams of robots” for US Army.

Katlyn Grasso W’15 is empowering “women who want to take over the world.”