Plies and Pirouettes, Rock and Roll 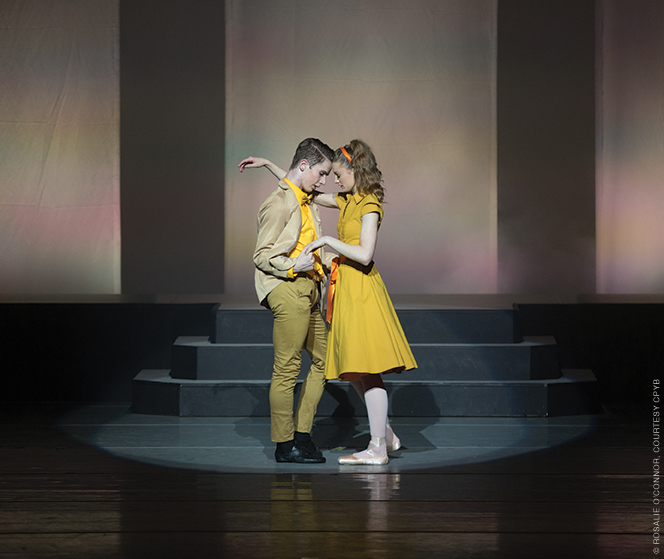 An unlikely librettist sets ballet to a Bandstand beat.

For four nights last June, the audience for the world premiere of Jukebox could relive some rock-and-roll classics— from “The Great Pretender” to “Rockin’ Pneumonia and the Boogie Woogie Flu”—and watch the gifted dancers of the Central Pennsylvania Youth Ballet reinterpret those tunes in terms of classical ballet. Bandstand meets the barre.

Jukebox was conceived by Hank Aberman C’60 G’62, who set the playlist and created a plot to link the numbers. A retired psychologist and conflict mediator who is a past president and current board member of CPYB, Aberman was concerned about the dwindling audience for ballet generally, and looking for “an audience magnet,” he says. “My solution was, if you take music you wanted to dance to when you were young and create a ballet for that, the music and titles would bring them in.”

Apparently, it worked. The four performances at the Whitaker Center for Science and the Arts in Harrisburg, where CPYB is the resident ballet company, were all sold out. “It got standing ovations after every performance and left people really excited and looking at ballet through different eyes,” says Alan Hineline, the show’s choreographer, who was CEO of CPYB from 2009 to 2014 and is currently on its faculty.

“It was astonishing,” says Gerald Riesenbach W’60 [“Alumni Profiles,” Mar|Apr 2009], an old friend of Aberman’s, who attended the Saturday night show. “These dancers did traditional ballet steps to a much faster beat than what they were used to. It was beautiful; the costumes were perfect for reliving the era; none of us could stop dancing.”

Aberman is an unlikely candidate to create a ballet. “This is going to be a shock, but I’ve never danced ballet in my life,” he jokes. “Although I would have benefitted from it because it helps athleticism.”

His sport was always basketball. He spent his youth on a neighborhood court at John Bartram High School in Southwest Philadelphia. The older, tougher kids chose the teams, and the younger boys had to prove they were worthy. Competition was fierce, but by his sophomore year, Aberman was consistently tapped to play.

He walked onto the men’s basketball team at Penn, playing for longtime Coach Jack McCloskey, who passed away in June at the age of 91 [“Obituaries,” Sep|Oct 2017]. One of his favorite memories is a time when McCloskey got so angry with the team’s lackluster play that he punched a hole in a blackboard at halftime. “We ended up winning, but that moment was amazing,” says Aberman, who still recalls with pride beating Big 5 rivals Temple and La Salle. (Now 70, he still plays, and recently won a three-on-three state championship in Pennsylvania.)

After getting his bachelor’s and master’s degrees in economics at Penn, Aberman added a doctorate in education from Temple in 1969, specializing in social and group processes. He was a professor of organizational behavior and chair of psychology at Shippensburg University in Carlisle, Pennsylvania, for many years, while also serving as a consultant for conflict resolution and strategic planning.

(One memorable professional accolade: after he helped improve relations between federal and local authorities at Gettysburg National Military Park, a cannonball was dedicated in his honor. “I couldn’t stop thinking, ‘Cannonball Aberman, man that is great,’” says Aberman, relishing the echo of legendary jazz saxophonist “Cannonball” Adderley, though Aberman himself plays piano.)

Following his retirement in 2004, Aberman began volunteering his problem-solving skills to various organizations and initially became involved with CPYB as a favor to a friend. “Then my friend nominated me for the board, and I couldn’t keep my mouth shut,” he says. “The next thing I knew I became vice president and suggested some surveys and strategic planning, and suddenly I was going to be president.”

Engaging new audiences can be a challenge for ballet organizations. “It’s an art form that people didn’t grow up with, and sometimes there is a sense of elitism to it,” says Hineline. “Until you find a way in, you might not find a passion for it.”

Aberman had an idea: a ballet that would draw on the favorite songs of his youth. Each day he would spend hours creating a soundtrack. He even wrote a storyline to go along with it—about a couple who falls apart over petty differences and then gets back together.

It took five years for the company to accept his idea, he says. Hineline wasn’t sold on it at first, mostly because he was younger and felt no emotional connection to the music. “Choreographers really like to work with their own music,” says Aberman. “They don’t usually take it from anyone else.” But he kept encouraging the CPYB faculty to try it until they agreed.

On opening night, Aberman took center stage to introduce the ballet and tell the audience how much the music meant to him growing up. And he’s thinking about the next step in his new career as a ballet librettist.

“I’m already playing around with a few things,” he says. “I was thinking about the Beatles.” —Alyson Krueger C’07