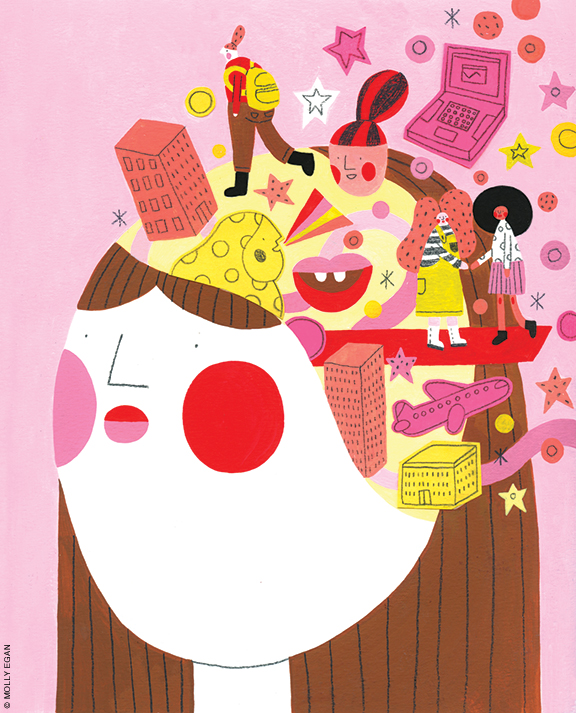 Connecting young women with their future.

Early one morning last summer, Melissa Hutchins, a senior at SUNY Oneonta in upstate New York, boarded a bus in Seattle along with 49 other young women. For the next twelve-and-a-half hours they met top female executives from companies with headquarters in the area, including Getty Images, Nordstrom, Zillow, Microsoft, and Amazon. Each stop was an opportunity to secure a future internship, job, scholarship, or mentor.

Hutchins, who has her sights set on a high-powered job in marketing, spent months waiting tables to pay for the flight to the West Coast and the $300 participation fee. Other participants came from as far away as North Carolina. By the end of the day she knew it was worth it.

She’d had an in-depth conversation with the head of marketing at nutritious snack-food purveyor Kind Bars; they discussed Hutchins’ startup idea for a product to get rid of the dirt in bagless vacuum cleaners. She also collected business cards from half a dozen marketing heads at the other companies, and made friends among the other women on the bus, who shared her passion and drive. “These opportunities were right in front of me,” she says. “I got to put my foot in the door in so many ways.”

This event, called a Discovery Day, was organized by GenHERation, a network that connects aspiring young women to companies that want to hire them. GenHERation’s founder and CEO is Katlyn Grasso W’15. She started the organization while a student at Penn, and it got a major boost when her idea was among the first winners of the $150,000 President’s Engagement Prizes [“Gazetteer,” May|Jun 2015].

Grasso launched an online portal (genheration.com) that high school and college-age females can sign into for free. There they can read stories about and interviews with women leaders, apply for award programs and scholarships with companies like Southwest Airlines and international pharmaceutical company GSK, and sign up for Discovery Days.

This past summer GenHERation hosted 10 trips in seven cities across the US. In Los Angeles, participants visited companies like Snapchat, NBCUniversal, Toms, and the Oprah Winfrey Network. Chicago stops included the headquarters of Gatorade, Groupon, and the Chicago Cubs.

Grasso has always had an entrepreneurial bent. When she was five she set up a lemonade stand on her family’s street in Buffalo—which provided a lesson on the importance of location: “I lived on a dead-end street, so my dad was my only customer.” As a Girl Scout, she launched a project that brought toiletries to victims of domestic and sexual abuse. She still keeps a thank-you note from an 8-year-old girl saying that getting the package was one of the only times she saw her mom smile.

The summer after her freshman year at Penn, Grasso was walking by a day-care center in her hometown that had a “help wanted” sign on the door. On impulse, she went in and claimed she had a company that taught dance to children (a total bluff) and closed a deal for her services. By the end of the summer, Tap for Tots had 30 clients.

Back then, Grasso knew she was going to launch a business; she just didn’t know what kind. She started looking around for female executives who could serve as examples, without much success.

“I learned that only 5.3 percent of Fortune 500 CEOs are now women,” she says. “I saw that as a big problem and knew I wanted to do something about it.” This was around the same time that Penn was wrapping up its $4.3 billion Making History campaign [“Big Finish, Fresh Start,” Mar|Apr 2013]. Grasso’s only thought: “There is money somewhere for this if there is four billion dollars around this campus.”

She received a summer research stipend to interview 700 high school girls and 40 female executives on their ideas about how to get more women in leadership positions. The biggest takeaway from the girls was that they had no role models, so Grasso created a small camp in Buffalo for 30 girls who would interact with a business leader every week.

A $10,000 Wharton Venture Award helped her build the first GenHERation website. By the end of her senior year, 12,000 girls had registered.

The game changer was winning one of the inaugural President’s Engagement Prizes in 2015, which provided her with $50,000 in living expenses and $100,000 for implementation for the year after graduation. She remembers eating a salad in Houston Hall when President Gutmann called her cellphone to share the news. “I just started crying,” she says. “It ranks pretty highly on my best five moments ever.” Nor is she likely to forget a dinner at the president’s house shortly after the announcement when she was surrounded by University trustees who told her how much they believed in her ability and objectives. Many of them are now financial backers of GenHERation.

Experts say GenHERation is doing exactly what is needed most: exposing younger girls to the highest level of opportunities, so they know what to reach for.

“Everyone is telling these girls: ‘Study STEM, go into STEM—STEM, STEM, STEM,’” says Trish Barber, president of the nonprofit Women in Technology. “But these girls don’t understand how it translates. They have to understand what they can do in the future.”

A high school near Palo Alto sent 10 girls—all children of immigrants whose parents had limited education—on a Discovery Day in San Francisco. Every one of them wrote about the experience and its impact on their college application essays.

“They were able to say, ‘I want to go to college to be an engineer because I got to visit Facebook and see what it is like,’ or ‘I want to study finance because I met the CFO of a tech company,’” as Grasso puts it.

Barber credits GenHERation with helping companies reach a wider pool of prepared, ambitious female candidates. “I get CEOs of tech companies telling me all the time, ‘My teams run better with women on them, and I want women in some of these roles,’” she says. “They are saying, ‘We want them there, but they aren’t applying, so please figure out ways to get them here.’”

That’s why Southwest Airlines chose to work with GenHERation, says Kimberly Grenier, the company’s community engagement manager. By meeting students early, sometimes at the beginning of high school, they can guide them toward the classes or internships needed to secure positions.

“We are very passionate about building the talent pipeline,” she says. “These women are the leaders of tomorrow.” Southwest recently ran a “pilot challenge” on the site, asking GenHERation members for ideas on ways to recruit future pilots and promising 30-minute phone-mentoring sessions and $50 Southwest gift cards for the top submissions.

Grasso and GenHERation have earned plaudits from former First Lady Michelle Obama, who invited Grasso to attend a Broadway event with women leaders like the Queen of Jordan and musician Sara Bareilles. More concretely, Grasso recently completed a round of investment that provided $500,000 to expand operations. The site recently listed 75,000 members, 60 national events, and 50 partner companies.

When asked about her ambitions for GenHERation, Grasso’s response is straightforward: “We want to be the ultimate destination for women who want to take over the world.”