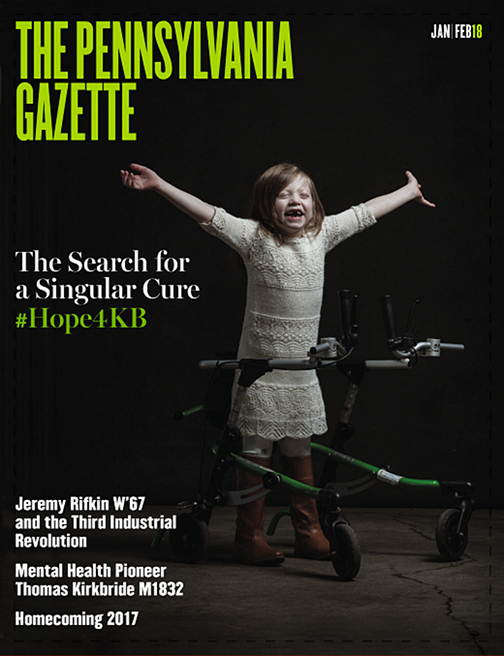 Hope for Katherine Belle
How one family’s journey through the realm of rare disease led them to the newest frontier of precision genetic medicine.
By Trey Popp

Homecoming 2017
Our annual photo gallery.
Plus: Alumni Award of Merit winners and citations.

Of Beneficent Buildings and Bedside Manners
Thomas S. Kirkbride M1832 wrote the book—literally—on the housing and treatment of the mentally ill in the 19th century.
By JoAnn Greco

Rifkin’s Next Revolution
Jeremy Rifkin W’67 launched his career as an activist by protesting the Vietnam War. Now he’s making perhaps his biggest impact yet advocating for a “third industrial revolution” to save the world from stagnating productivity and the ravages of climate change.
By Alyson Krueger

From the Editor | A heartbreaking, hopeful story.

From College Hall | The need for university-driven innovation.

Notes from the Undergrad | Parental portrait.

Alumni Voices | “What was so great about being smart?”

Service | At 25, Netter Center focuses on the future.

Old Penn | From Friend to Leatherneck.