This Is Your Brain on Politics 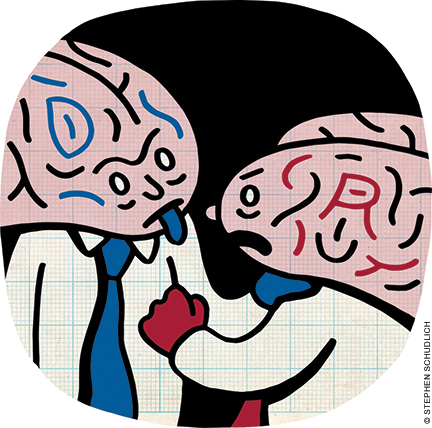 Before he became a social and cognitive scientist, Emile Bruneau was a California schoolteacher who had an uncanny habit of landing in the middle of ethnic and religious strife.

In the summer of 1994, he flew to South Africa, where he volunteered in black townships and colored communities and played rugby with whites—all as that country transitioned from apartheid to democracy. In the late 1990s, he helped at a camp in Ireland that brought Protestant and Catholic youths together during the Troubles. In 2001, he was visiting journalist friends in Sri Lanka when the Tamil Tigers blew up the airport.

“Everything structurally about the conflicts was completely distinct,” Bruneau, 45, says from his snug office in the Annenberg School for Communication, where he is a research associate and lecturer. He also was recently appointed director of Penn’s Peace and Conflict Neuroscience Lab.

Yet there were clear similarities. “I could literally take the words that someone in Sri Lanka would use to describe the conflict, and I could put them in the mouth of the kid from Belfast, and they would make complete sense for that conflict,” Bruneau says.

Now, the man who has a “pulse on the real world,” as a colleague put it, is investigating another conflict: Democrats versus Republicans.

In the basement of the Stellar-Chance Laboratory, research coordinator Ally Paul slides a 35-year-old Hillary Clinton voter who thinks the president is a “crazy person” into an MRI machine. Over the next 67 minutes, his brain activity gets recorded as he views partisan political videos as well as neutral fare.

Bruneau is looking for a neural signature for partisan commitment. If he succeeds—and it’s a big if—then he’ll have a neat way to test the effectiveness of various interventions designed to counteract people’s propensity to treat political debate like tribal warfare.

Democrats and Republicans appear to follow a pattern familiar to Bruneau, one that echoes conflicts around the world, according to his research.

“You’re humiliated and dehumanized by the other side,” Bruneau says. “The words that Palestinians use when talking about Israelis, the words that the Irish use to talk about the British,” he says, routinely devalue the humanity of their targets.

So do the words used by some Democrats (think deplorables, or worse) and Republicans (think snowflakes, or worse) to talk about each other.

“The lowest common denominator,” Bruneau says, “is that everybody in those conflicts has a human brain.”

The only child of hippies, Bruneau initially lived on a commune in the Santa Cruz Mountains of northern California and continues to hold tight to liberal ideals. The father of two calls Mount Airy home, sends his daughter to an alternative school, and commutes 26-miles round trip to campus on his red-and-black bike. At the same time, Bruneau has more openness to conservative viewpoints than perhaps most in the age of identity politics.

When he was still young, his parents moved to Willits, California, a small town of 4,000 with a strong conservative streak. “My social media feed has a lot of my conservative friends on it,” he says. “I know they’re good people. We knew each other far before we had political identities.”

His Facebook page has served as a personal laboratory, where his observations on how politics play out often inspire studies in his actual lab—which, notwithstanding his current interest in fMRI imaging, have mostly relied on traditional social science techniques.

“There are not many researchers out there who have as strong a grasp as Dr. Bruneau does on both the social psychological and cognitive neuroscientific issues involved in prejudice and dehumanization,” says John T. Jost, a professor of psychology and politics and codirector of the Center for Social and Political Behavior at New York University.

Bruneau’s passion is born in part of frustration. Over the last 60 years, he says, conflict resolution efforts have faced little empirical scrutiny. “By not evaluating our efforts, I feel like we’ve been spinning our wheels the entire time,” he says.

For now, his focus is on extreme ideology. If he can find a brain region that responds strongly to partisan stimuli, then he can test interventions to figure out which ones reduce this tendency. That could prove very useful.

Consider the camp in Ireland, where the boys spent much time on sharing perspectives. On the last day, Bruneau says, a fight broke out and the camp immediately split into Catholic and Protestant factions. “Our camp failed,” he says.

Bruneau’s research hints at why. Dialogue programs may be built upon faulty assumptions. When, for example, marginalized groups such as Palestinians or Mexican immigrants passively listened to the perspective of Israelis or white Americans, their attitudes about the others stayed the same or got worse.

Neuroimaging, he says, might help explain why: “It’s one tool that allows you, at least theoretically, to get a view under the hood, directly at the processing going on in someone’s mind.”

“He goes where the action is,” says Falk. “He identifies problems and tries to fix them … He brings the scientific toolkit to attack these issues systematically. It’s a really essential way to approach this kind of work.”

In a pilot, Bruneau placed certain subtle constraints on the rules of engagement in a closed Facebook group for political discussion. Subjects might be asked to respond to a post with a summary of content, rather than a personal point of view. That allows the listener “to hear the other side” in a deeper way, as Bruneau’s earlier research has suggested.

The imaging study involving that Hillary voter is part of Pivoting Purple. Bruneau is focusing on the medial precuneous, a region the brain that he suspects responds to ideology, in part based on his earlier imaging studies of Arabs and Israelis.

Take, for example, a clip of the third presidential debate. If the medial precuneus indeed responds to partisanship, Bruneau hypothesizes that brain activity should spike more for Democrats while Donald Trump W’68 is talking ideology compared to when Hillary Clinton does. The reverse should occur when Republicans view the same clip. In other words, each side latches onto the other extreme.

“That to me is an interesting brain region that cares a lot about political ideology,” Bruneau says. Measuring its response before and after intervention efforts could help identify effective methods to encourage rapprochement between hostile groups—and help researchers jettison ineffective methods. “My hope is that we can demystify some of these processes that are driving us, the biases that lie below the level of conscious awareness.”

Jost, who cowrote a chapter on brain mapping for Advances in Political Psychology, cautions that linking brain processes to any specific stimuli is “pretty tricky, because a lot of different things happen to many regions of one’s brain when you watch a video on an emotionally arousing topic like this.” He warns that “it’s not clear to me that ‘partisan strength’ would have a clear and distinctive neural signature.”

Bruneau acknowledges the limitations, especially when the stimulus is a complex video that makes controlling for every explanation of brain activity nearly impossible. So he’s taking an unconventional approach.

“I am looking at each little piece of the brain,” he says, “and recording how it responds to the video every second.” Then he plans to analyze how the brain region responds over time across subjects. “I want to find brain regions that show a lot of correlation within Democrats and within Republicans as they are watching these videos but weakly correlate between Democrats and Republicans.

“I don’t know if it will work,” Bruneau allows. “But it makes a lot of theoretical sense to do it this way.”

Pivoting Purple is still in its early stages, but Bruneau’s recent research on dehumanization sheds some light on why some Democrats and Republicans appear to despise each other—and what can be done about it.

During the 2016 Republican primary campaign, Bruneau noted that Mexican immigrants and Muslims were often targets of derogatory attacks. He measured this dehumanization with a surprisingly simple test. In a pair of studies, he asked subjects where they would place Mexicans or Muslims on the “Ascent of Man” scale—the classic artistic rendering of a chimpanzee morphing into a modern-day human. On average, majority Americans rated Mexicans and Muslims as less evolved and supported anti-immigrant and anti-Muslim policies. They also tended to favor Trump.

Turns out Democrats and Republicans also tend to view each other as more animal-like as well—that is, savage, backward, and primitive, according to his studies. “And that’s equally predictive of their hostility to the other side,” he says.

Bruneau has also found that groups that felt dehumanized—what he calls meta-dehumanization—were more likely to return that hostility. Mexicans and Muslims tended to support boycotts of Trump businesses, for instance.

Other research on Islamophobia, published in October 2017 in Personality and Social Psychology Bulletin, suggests that appeals to logic fare better than appeals to emotion—which is the opposite of what many researchers have argued. One of several interventions, including emotional appeals, featured a video interview with a Muslim woman who argued that blaming all Muslims for attacks was like blaming all Christians for the KKK’s actions. Watching it proved most effective in reducing a subject’s propensity to blame all Muslims collectively after a terrorist attack.

Another tack, known as the hypocrisy approach, was distilled into a series of Socratic exercises. One involved Dylann Roof, the white supremacist who murdered nine black parishioners in Charleston, South Carolina, in 2015. Study participants were asked what responsibility they personally bore for Roof’s actions. How responsible were all white Americans? They were also asked similar questions about the November 2015 Paris attacks. How responsible was a Muslim baker in Southern France? How responsible were all Muslims?

Study subjects who went through these exercises ended up placing little collective blame on all Muslims, registering 10 to 12 on a 100-point scale of responsibility—compared to 40 for a control group.

“So it’s a huge difference,” Bruneau says. “It also precipitates change in their policy attitudes and their behavior. People who go through this activity are less willing to sign anti-Muslim petitions like the Muslim ban.”

Bruneau plans to do similar studies on Democrats and Republicans. “I’m really concerned about political partisanship in the US,” he says. “Democracy requires civil discourse … Everything has become tribal.”

Anyone on social media is no doubt well acquainted with partisan digs and group blaming. Bruneau certainly sees it. He often tries to gently point out hypocrisy with solid facts.

“If you’re forced to think deliberatively about your views,” he says, “then you are forced to confront these unconscious biases that are usually swaying your opinions.”

That gives him hope. “An empirical approach offers a method for improvement,” he says. “We can progress forward.” —Lini S. Kadaba