Teaching to the Differences 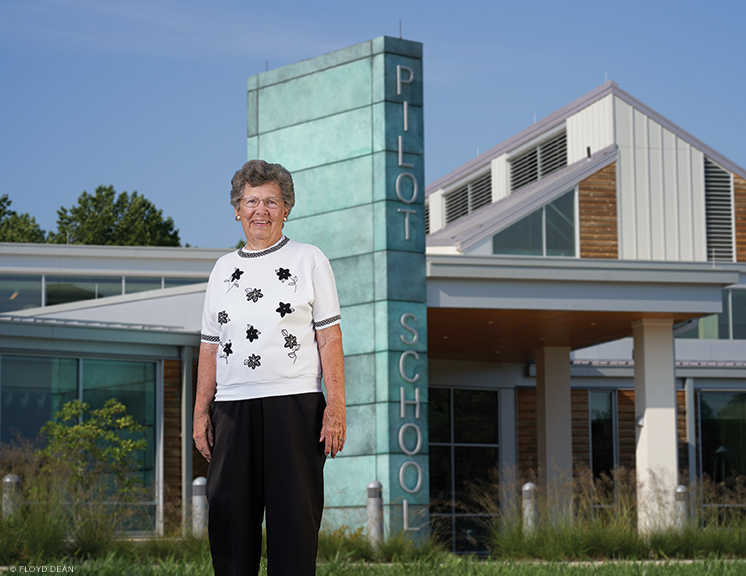 A pioneer of teaching children with learning differences looks back.

Doris LeStourgeon GEd’56 may not have children of her own, but in a way she has raised hundreds. As the cofounder and first director of the Pilot School in Wilmington, Delaware, she spent 50 years teaching children with learning differences, such as dyslexia, dysgraphia, and ADHD.

“I’ve always been concerned about the underdog,” says LeStourgeon, who turns 88 in May. She started her career in 1951 as a social worker for foster children, but with a 300-child case load, she soon found herself overworked and overwhelmed.

In the early days of Pilot, LeStourgeon and Audrey Wonder CW’56 taught five little boys in an empty room in a church. They were all bright kids, she says, but because of their motor, auditory, and visual problems, they were failing in the top schools of Delaware.

“Sure, they had special-ed classes in the basement of schools,” LeStourgeon says with a grimace. “They used the old textbooks when the rest of the school would get a new series.” In the 1950s, the options for these youngsters were slim.

One such boy was the son of Mary Kaye Carpenter, a local philanthropist. His serious reading difficulties were holding him back, and teachers didn’t know how to reach him. Early in 1957, Carpenter and Josephine Myers, a leading educator in the community, wrote to universities around the country expressing a need for a different type of teaching. Among the schools they contacted was Penn.

At the time, LeStourgeon was taking graduate classes and working at Penn’s now-defunct Illman-Carter demonstration school with Lauren Hooper. Together, they were experimenting with ungraded primary classrooms, which teach to a child’s skill level rather than age, and which reward effort over achievement. Then, in April of that year, LeStourgeon was invited to join Carpenter and Myers’ project. The next day, Penn offered her an assistantship at Illman-Carter. “I turned them down,” she says without regret.

Today, those five students in a Sunday School classroom have increased to 160 kids on a 50-acre campus. (The multi-million-dollar facility opened in 2016 and is surrounded by Brandywine Creek State Park, making it easy to incorporate nature into students’ daily lives.) Yet the student-to-teacher ratio is still only five-to-one.

Pilot’s name was borrowed from industry, where research and new processes are put through pilot experiments, LeStourgeon explains. “This was a pilot experiment in education.”

According to the American Speech-Language-Hearing Association, 15 to 20 percent of children in the United States have a language-based learning disability. The brains of children with dyslexia, for example, are wired differently, with parts of the front brain being overstimulated and critical areas in the back being under-stimulated when the child reads. While the brain’s plasticity allows for reshaping and rewiring with individualized attention, traditional schools seldom provide that attention.

“The kids who have an average or above-average IQ are the first to suffer the consequences of a little stumble,” LeStourgeon explains. “That feeling that they can’t keep up hits [them] and becomes a self-fulfilling prophecy. The brighter the child, the more they understand that they can’t do what they should be doing.”

Self-esteem and self-awareness have always been key components of the Pilot School’s methods—“teaching to their strengths, while developing their weaknesses,” as LeStourgeon puts it. “They get that feeling of ‘I can do this,’ which builds their confidence.

“We developed a skills program, which was unique to Pilot,” she adds. “For a half-hour every day, each youngster works on his weakest point. They understand it’s hard for them—for example, tracking the alphabet, making sure their eyes are going in the right direction. You do whatever it takes to reach a child. If you have to stand on your head to reach them, you stand on your head.”

One former student was so self-conscious that he didn’t talk when he first arrived. After his time at Pilot, the boy was placed in a technical high school and got a job at a fast-food restaurant. He later told LeStourgeon that he had explained to his boss that he was a visual learner and that auditory learning was very difficult for him. “He told his boss, ‘If you show me, I can do it,’” she recalls.

“The hardest ones to deal with are the withdrawn children,” she admits. “The ones acting out, if they give you something to hang onto, you can channel it, with a little work. From the beginning, the hyperactive kids were allowed to get up and move around, but they couldn’t touch anybody. We put limits on them. One little boy had trouble focusing and paying attention, and he’d just get up and walk to the window, and that was OK.” The teaching was made to fit the child, not the other way around.

Pilot was created to be a short-term school. The curriculum teaches children how to learn, in their own way, so that they can take that self-knowledge with them into a traditional educational setting and, later, out into the world. “With some it takes a year,” says LeStourgeon. “With some it takes eight years.”

“Placement continues to be really important,” she stresses. “We used to visit every school, tell them what they were getting, and if they accepted that child, then it was their responsibility to educate him because they were aware of his strengths and weaknesses. And I had no problem telling them. I had to be an advocate.”

Movement, art, music, and outdoor learning have always played a big part in a Pilot education.

“When we started, outer space was really popular,” LeStourgeon recalls. “We had five boys. And I remember we had those heavy, plastic barrels. They painted them silver, fastened them together, and we had a spaceship. I’m not sure the church loved it, but we did!”

LeStourgeon staunchly believes that unlocking a child’s potential early on makes the most difference. “If you get them before five, it’s usually before failure,” she says. “It doesn’t matter when they learn to read; they will learn to read.

“We had a boy who came to us at seven, and at nine he still wasn’t reading,” she recalls. “His mother was so worried, she didn’t know what to do. But we just kept plugging away. Eventually, he got the skills and went off to college and got his engineering degree. Well, he wasn’t satisfied with that, so he went back for another degree, and now he’s a physical therapist. He came back to see me and he said, ‘You’re the only one who had faith in me.’ That’s why you keep going.” —NP