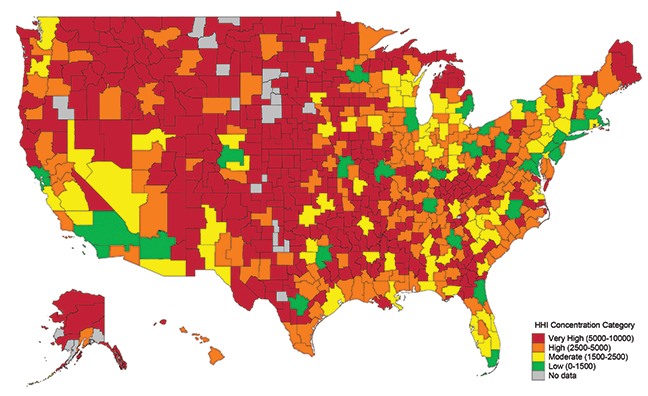 A study fingers a new culprit for wage stagnation: a dearth of employers.

The last 45 years have seen dramatic changes in the US economy, with one especially stubborn and worrisome exception: American workers, on the whole, have been unable to get a meaningful raise. As the Harvard Business Review noted last year, inflation-adjusted hourly wages received by the typical worker have grown at a paltry 0.2 percent annual rate since 1973—after having nearly doubled over the preceding 25 years. Many explanations have been advanced, from sagging productivity, to diminished business formation, to the casualties of global trade, to the diverging fortunes of top earners and everyone else. In a new working paper, economist Ioana Marinescu, an assistant professor at the School of Social Policy and Practice, proposes another: The decades-long wave of corporate mergers has reduced the number of employers and thereby depressed competition among them for workers. With José Anzar of IESE Business School and Marshall Steinbaum of the Roosevelt Institute, Marinescu investigated the impact of labor-market concentration on wages in more than 8,000 individual US labor markets. She talked with Gazette associate editor Trey Popp about their empirical findings. The conversation has been edited for length and clarity.

What made you think labor-market concentration might help explain falling or stalling wages?

Recently I worked on the impact of wages on job applications. When companies post wages, you can ask: If I increase wages a bit, how many more applicants will I get? Classic theory predicts that you would get a huge effect—because if there’s just one market price, and you’re the one who’s paying just a bit more, you should get a huge amount of applicants. But actually the effect is relatively small. So this made me think, maybe there is a monopsony issue in the labor market—meaning that workers are being paid less than their value to production due to a lack of competition among employers.

So how did you test that hypothesis?

CareerBuilder.com is the largest online job search website in the country. We have their data on vacancies in different labor markets—which we define as an occupation in a commuting zone. For example, accountants in Philadelphia would be a labor market. And we’re looking at which companies are hiring in this market every quarter. Out of all the vacancies in a given quarter, each company has a share, so you can compute overall concentration—in the same way people who study product market competition do it. If there’s high concentration, that means most jobs are posted by just a few companies. Low concentration means there is a dispersed number of companies all posting jobs. We looked at about 8,000 markets, comprising every city in the US, big or small, and all the most common occupations. Things like nurses, customer service representatives, telemarketers—and because the most common occupations tend to be service-related, we also added the most common occupations in manufacturing and construction.

And what did you find?

On average, labor market concentration is high. The Federal Trade Commission has thresholds for the product market, measured with something called the Herfindahl-Hirschman Index. In an anti-trust situation, if companies are merging and driving that metric over 2,500, that is prima facie evidence that the merger should be stopped. On average, we found a concentration of over 3,000. So most labor markets in the US are already in the high red zone for concentration.

We find that the higher the concentration, the lower wages companies are willing to pay.

Does the dynamic vary from place to place?

Is this a matter of lower wages within particular job categories, or does it have to do with a change in the composition of the jobs being posted?

There is some suggestive evidence that when concentration is higher, part of what’s happening is that firms no longer post the kinds of jobs that are high-paying; somehow they’re more interested in hiring the relatively less-qualified people. But we also controlled for job title. So, for accountants in Philadelphia, there are cost accountants, financial accountants, directors of accounting, and so on. And even after we account for the mix of jobs on offer, still it is the case that higher concentration is associated with lower wages within each specific job title.

Contemporary anti-trust policy has mostly focused on consumer welfare—the way lack of competition can affect product prices. How do you think policymakers should react to this finding?

It might be useful to pay more attention to impacts on the labor market. I want to point out that this is already part of the merger guidelines. For horizontal mergers, the guidelines say we should also evaluate buyer power—because a company not only sells products but buys inputs to make those products, like raw materials and labor, and it can influence the prices of those things. So that’s already in there. It’s just that practically speaking, it has received relatively little attention in the decisions that are being made. So the situation is ripe for change, because this doesn’t demand a huge leap in terms of the theory, it’s more the practice. And I’m excited to say that I’m working right now with Herb Hovenkamp, a law professor here at Penn and the author of the most-cited anti-trust law manual, to explain how this finding might be used in order to consider future mergers from a legal standpoint. We are about to write a law paper that explains how this could be incorporated into a test for merger evaluation.

To make it easier for a judge or a regulator to analyze the effects of a merger?

Exactly. So one of the most straightforward things to do is, say it’s two hospitals merging, you can look at nurses, and you can say, based on our data your merger will increase the concentration in the labor market above 2,500—so what do you have to say [in defense of the merger]?

The good news is that judges have started to pay attention to this already, but they haven’t yet taken out their guns. So we are on the cusp of a change. And that’s important because some other literature shows that there’s been an increase in mergers and an increase in markups: Companies are selling to us at higher and higher prices compared to the cost. So that is an indication that anti-trust policy hasn’t been sufficiently deterring, and maybe we need to revise our practice a little bit to bring it in line with what we have learned from the evidence over the past 30 years. And effects of labor-market concentration on wages is an important aspect.