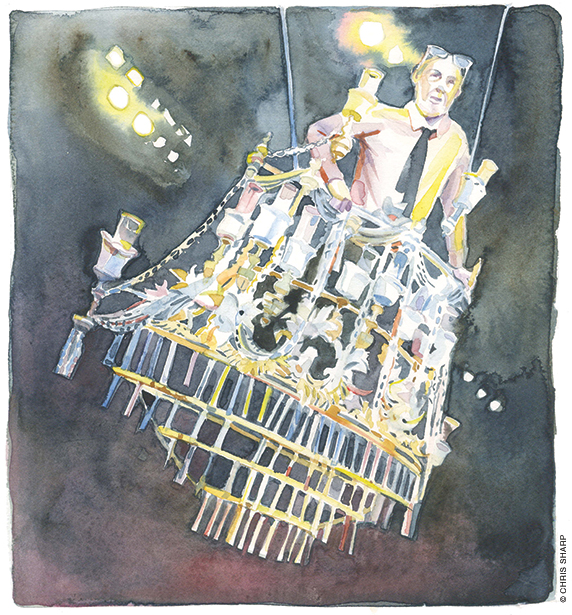 How we adapted Phantom of the Opera to the stage, three decades ago.

I decided I should pay a visit to the Palais Garnier, the opera house in which much of Phantom takes place. There are five floors from the stage to the roof, and another five to the legendary lake below—and the management gave me a tour of all that ground. The theater does not actually span a subterranean lake; much of Paris is built on sand, so the building is supported by a mixture of water and sand. But at the time, I dropped a coin down a grate in the basement and heard it plunk into the water.

Rising above the cellar is a series of dungeon-like staircases leading to workrooms, shops, and finally the dressing rooms. The dressing rooms are especially interesting because they have extremely high ceilings and are more commodious than what we’re used to in New York. The stage is large, and apart from some old stage machinery, quite modern. Upstage of the playing area behind the rear wall is a beautiful fin de siècle red damask room with small tables and chairs, in which the ballerinas of the company historically entertained their gentlemen friends, I was told, sometimes even during performances. All of this supported the relationship of our leading character, Christine, with the juvenile vicomte, Raoul de Chagny.

The Garnier’s magnificent roof features a walking path around the lower part, with gold angels mounted on the four corners and a dome that rises above. I was invited to walk to the top of the dome and straddle its peak. I did so, and there was a fierce wind. The fellow who took me on the tour stayed below—I’m sure it was safe, but it felt precipitous. From the top, I viewed a panorama of the Place de l’Opéra and, behind it, the Galeries Lafayette—Paris’s largest and probably most famous department store. The whole experience was that currently overused word: awesome.

We all agreed that the show should open without music at an auction on the stage of the opera house—an abstract, dreamlike sequence. When directing it, I’ve always told the actors that they are working underwater. As the auction progresses, they applaud ritually with gloved hands in a disjointed tempo that adds unease to the sequence. All of the voices at the auction are deadly, unemotional, as at a funeral. The music is introduced during the sequence, notably, by the juvenile love interest, who when we meet him is in his 90s in a wheelchair—fragile and more attentive to memory than to the present. Eerie. Perhaps everyone on the stage has died?

From that prologue through all of Phantom, which has many settings in its storytelling, each sequence must deliver a surprise, often a shock. The lighting is timed so that in some scenes the stage goes dark before the dialogue has finished, and in others the dialogue precedes the lighting.

Maria Björnson’s set designs were minimalist. Tell that to any of our audiences and they won’t believe it. But it’s true: Phantom is staged in a shiny black enamel box in which choice props are revealed. Yes, there’s one huge sequence with a staircase representing the lobby of the Garnier; there are some canvas drops rendered in the style of 19th-century scenery; and of course, there is the roof of the Paris Opera that I climbed. There’s the travelator which delivers the Phantom and Christine to his underground lair. But otherwise, there is a small dressing room, a desk, a table, and no doors—but many beautifully designed hand-painted drapes made by a family Björnson had located in France.

Andrew came up with the title song, and with “Music of the Night,” as well as “All I Ask of You,” my favorite in the show. When I first heard “Music of the Night,” I thought it was such a long number that staging it would be a hell of a task. After all, for two people to simply stand onstage with one singing and the other listening seemed to beg for old-fashioned opera staging. However, when I realized that the Phantom was Svengali and Christine his Trilby, I discovered that the words in the lyrics were commands and that not only was he hypnotizing Christine, he was seducing her. That solved it.

“Masquerade,” Gillian Lynne’s Act 2 opener, reveals about 80 figures—40 of them our cast, and the other 40 dummies fully costumed and on springs. As the dancers move among them, they move as well. Early in the show’s run, it fooled a lot of experts: “How can you afford such a huge company?”

For me, a major accomplishment is the three cod operas. The first is a faux Verdi Aida , the second a Mozart commedia dell’arte, and the third a 12-tone Schoenberg. I’m still amazed that such a popular show features material of that nature, and that the audience seems to get it and is entertained by it—12-tone and all.

Andrew had fashioned the leading lady for Sarah Brightman, who did audition for it and seemed the personification of a 19th-century leading lady. Then we looked for a Raoul. Steve Barton, an American who was living with his wife in Germany and starring in the Theater des Westens, flew to London, and the role was his.

As for the Phantom, we had little luck during the London auditions. I returned to New York having cast all the supporting roles and the chorus, but still no leading man. Andrew phoned about a week later to say that he believed that he had solved it: “What about Michael Crawford?” Well, I had seen Michael Crawford as a farceur; he played in Peter Shaffer’s Black Comedy and was currently starring in a very successful production of Barnum, in which he was called on not only to sing but also to exhibit astonishing gymnastic prowess. But as the Phantom? Andrew supplied the missing information: Michael had been a star boy soprano and also had trained in opera. I flew to London the next day, and we met in Andrew’s office. Michael sang perhaps eight bars and we’d found our Phantom.

Before the first day of rehearsal, I flew from Spain to London to meet with the prosthetic expert, Christopher Tucker, where we decided on the design of the Phantom’s mask. I wanted a mask which bisected his face from forehead to chin, because it would free half of his face to express everything he was feeling. It was molded of clear thermo plastic. For each performance, the false deformity beneath the mask would be applied to his face, along with a bald pate. All of this would be discarded after each performance and replaced.

Some afternoons, I would take Ruth Mitchell, my assistant, away from rehearsal to the theater to test some of the stage machinery. We had discovered that Her Majesty’s is the only theatre in London that still has working Victorian machinery—traps, lifts, everything turned by hand. Björnson loved that and designed the set to conform with it. The show was teched with candelabra cranked by hand from the basement. Ruth and I checked the travelator ourselves to prove that it was safe.

Late in the show, there is a moment when Raoul dives into the lake in the opera house from the travelator—it’s one of the most effective moves in the show and very simply rendered. All he has to do is climb over a rail and drop through the stage floor to a pile of mattresses. Smoke is used to complete the illusion. Ruth took that drop. The chandelier was later dubbed “Ruthie” in London, and to this day, it still bears her name all over the world.

Given the nature of the material and its staging, I had ordered many more surprises than we needed. I had no idea which ones would work or, more relevantly, which would enhance the tension—the sense of unease we wished for our cast, but also for our audiences. So I ordered:

• A prop horse on which Christine could be led by the Phantom to his lair below. (The horse was so cumbersome, so heavy, that it moved tentatively and at a snail’s pace. Good-bye, costly horse.)

• Six live white doves to bedeck the roof of the opera house and on cue to escape into the flies. (I had been assured by their wrangler that they would do as rehearsed. However, when they flew, it wasn’t up, but rather across the auditorium and to the ceiling of the theater, where they perched for two days until he could coax them down. Six unemployed doves.)

• A ratcatcher is discovered on the travelator. Purpose? To direct the audience’s attention to a scene which followed with the ballet mistress and Raoul. The ratcatcher was directed to chase a swarm of rats with blood-red eyes. (The rats looked like a string of foot-long sausages pulled offstage, followed by a man with a net! The man with the net remains in the show, but I defy anyone to tell me what that fellow is doing—I guess it doesn’t matter.)

• Finally, I ordered costumes for two statues featured in the cemetery sequence, when Christine goes to visit the grave of her famous violinist father. They were to come alive along with lightning and thunder. Yes, and five jets of fire from the stage to scare the hell out of the audience when the statues failed to shock. Goodbye statues, welcome jets of fire!

We teched for four weeks, and there were more orchestra calls than I have ever experienced. Andrew is a stickler for sound, and it is worth it. Then there was a dress rehearsal when the chandelier refused to budge from the stage. Later, in previews, when it refused to plummet from the ceiling to the stage, no one seemed to care. Difficult to believe, but Phantom at its first preview was the same show that is celebrating its 31st year in London, and racked up 30 years on Broadway on January 26, 2018. 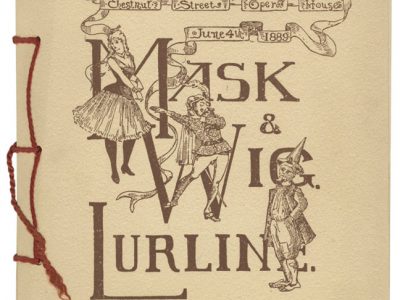 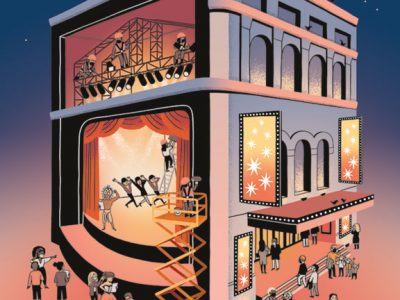