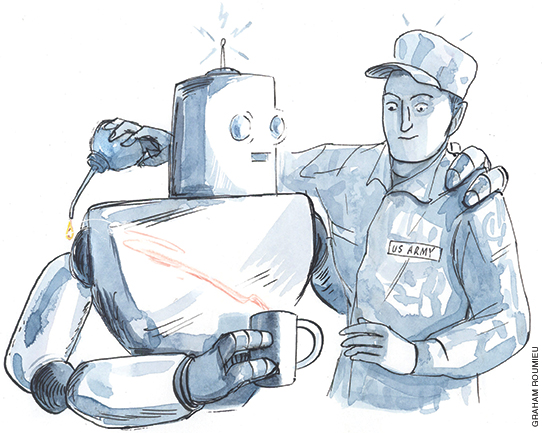 Penn will now build robots for the army.

The United States Army Laboratory has awarded a five-year, $27 million grant to the School of Engineering and Applied Science to create autonomous, intelligent robots designed to learn from and adapt to challenging environments. The robots will be charged with assisting humans in tasks like hostage rescue, gathering information in the wake of terrorist attacks or natural disasters, and humanitarian missions.

Penn will lead the Army Research Laboratory’s Distributed and Collaborative Intelligent Systems and Technology (DCIST) Collaborative Research Alliance, working alongside MIT, the Georgia Institute of Technology, and faculty members from the University of California–San Diego, the University of California–Berkeley, and the University of Southern California. The researchers will focus on advancing the field of distributed intelligence and learning, building a cohesive team of robots, sensors, and humans. One goal is to achieve resiliency in group behaviors, so that teams of robots and humans can respond to disruption.

“We want to have teams of robots that know how to work together but can figure out how to keep working even if some of their teammates crash or fail, if GPS signal is unavailable, or if cloud services are disrupted,” said Vijay Kumar, Penn Engineering’s Nemirovsky Family Dean and director of the DCIST program. “This means designing networks with loose, flexible connections that can change on the fly. That way, a single event can’t bring down the entire network. More importantly, we want them to learn to perform tasks they may have never performed and work alongside humans that they may never have worked with.”

Kumar has worked extensively on drone-related projects in the past [“Drone’s Day Scenarios,” Nov|Dec 2012]. He has been active in Penn’s General Robotics, Automation and Sensing and Perception (GRASP) Lab, and his TED talk on “Robots that fly … and cooperate” has been viewed over 4 million times. He will work alongside Penn faculty members Alejandro Ribiero, Ani Hsieh, George Pappas, Kostas Daniilidis, Ruth Yalom, Camillo Taylor, and Giuseppe Loianno.