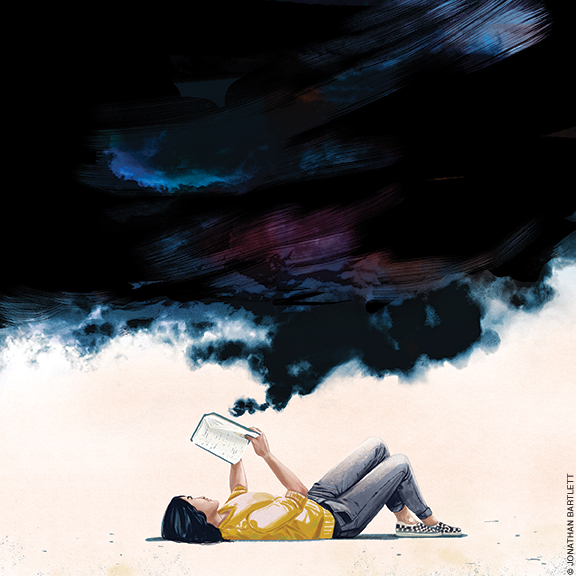 No phones. No homework. No note-taking. No escape. Welcome to Religious Studies 256: “Existential Despair.”

Sometimes they walked while reading to stay awake. At eight, nine, ten o’clock at night, some students would wish they’d napped before class. Others wondered whether they should have planned out their entire sleep schedule around this night. They read in clusters around Claudia Cohen Hall—draped on staircases, nestled in faculty lounges, spread out in a classroom. Eytan Deneer-Agus, a sophomore from Massachusetts, liked the window sill.

“I’d watch the sun go down and let it light up the page,” he says. “That was a very nice experience, being in a classroom and feeling at home. I wouldn’t want to go outside. I didn’t want to be a part of the world, for just this little bit of time.”

The class was called “Existential Despair.” According to its official description, it aimed to “explain the ritual, liturgical, homiletic, meditative, reflective, self-destructive, psycho-somatic and ascetic ways despair is both conditioned and mitigated by different thinkers from various traditions over time.” It met weekly for seven hours from 5 p.m. to midnight. It was the brainchild of religious-studies professor Justin McDaniel, who inspires an almost reverential following among his students and is known across campus for teaching “the monk class”: a seminar called “Living Deliberately,” in which, for several weeks, students (try to) behave like monks [“Gazetteer,” Sep|Oct 2012].

“Existential Despair” functioned differently, more like a salon than a course. The object: to read and talk. McDaniel would collect students’ phones in a box and distribute copies of texts—ranging from Rilke’s Letters to a Young Poet to Junkie, a novel about heroin addiction by William S. Burroughs—at the start of class sessions, and then the students would read an entire book in one sitting. They weren’t allowed to highlight or annotate. All they could do, for four or five hours, was “push two chairs together, put your feet up, enjoy the book, and soak in it,” Eytan says.

The discussions afterwards were free-flowing, for the most part, but were complemented by structured activities. Students created skits, or staged debates. (One week, the class was split into halves to argue over whose life was “better”: that of a heroin addict or that of a struggling young writer.) At one class session, students designed their own cults that would cure despair. One group of students devised a cult that centered on the children’s TV show My Little Pony to distract its members from existential sadness.

“Half the time, I would leave the discussion and be like, ‘That was the most pretentious, privileged thing I’ve ever done, just sitting around and talking about sadness,’” says Claire Huffman, a sophomore from Portland, Oregon. “But it was really compelling and enlightening. I don’t know if I would say I found the meaning of life, but just talking to people with no TV or phones about something serious—it’s just intellectually fun.”

A desire to cultivate a distraction-free zone—focusing solely on literature for a large chunk of time—is part of what drove McDaniel to create the class.

“Students are busy,” he says. “I get it. I understand they have a lot of hobbies and activities and what I like to call ‘engineered well–roundedness,’ but even when they do have time, it’s so easy to go on YouTube, or follow one link to the next link, or text their friends. The idea of quiet time is taken up by browsing.”

And in a class where every single student has done the reading—there was no homework, and the only assignments were to respond to questions about the texts in journals McDaniel passed out—the entire classroom was engaged. In nearly two decades of teaching, McDaniel says “Existential Despair” has yielded the best class discussions of his career.

Part of that stems from the close-knit community of students. The class size was capped at 30 students—whittled down from some 257 applicants. When they started the class, McDaniel instructed them not to discuss any of their “attributes,” Eytan says. “No clubs, not where you’re from, just who you are and what you struggle with.”

“I only knew the people there based on their thoughts about the nature of existence,” Huffman says. She laughs. “I’d see them on Locust and be like, ‘Hey, you don’t think the self exists, and that’s all I know about you.’”

The students read in each other’s apartments, cooked meals for each other, and kept a group chat. Many craved a space to continue their classroom conversations.

Grades were effectively beside the point. Class participation accounted for 75 percent of a student’s grade. The remainder was presumably based on the writing they did in their journals, although students weren’t exactly sure.

“Especially in the context of Penn, where people get so caught up in goals and ambition, it seems like a lot of people are on this single track,” says Sonia Pearson, a sophomore in the class. “There’s just not enough space and time for people to sit down and talk about things that aren’t productive.”

Those “things”—how humans approach struggle, how we deal with pain and anxiety and despair—are, to McDaniel, essential topics for students to address.

“Look, life sucks,” he says. “But with great literature, you can feel a little less alone.”