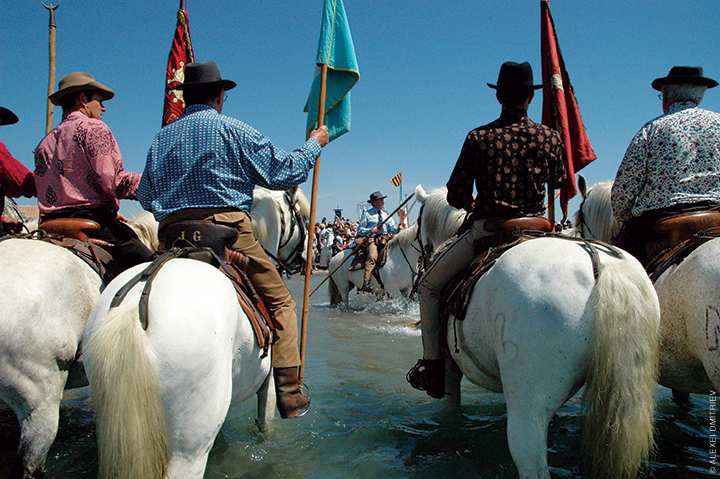 Among the Roma pilgrims in the Camargue.

Salt plains stretched out before me in a vast expanse punctuated by monochromatic reeds swaying over shallow water. It was as though color had been drained out of the insipid landscape, or perhaps washed away. Was this really southern France? Not long ago I had been among rolling hills of lavender. The lack of a vertical dominant here felt almost painful. Even a clutch of flamingos did little to cheer me up.

“You are lucky they were pink,” said a plumber whose van I had followed into this place. “They must have stumbled upon some carotene-rich shrimp.”

We were standing in the Camargue, whose isolation from the markers of civilization made it seem like an island resisting “the onslaught of la bêtise humaine,” as the philosophical plumber put it. The marshlands extended for miles. Four hundred bird species touch down in this nature reserve on their way to or from Africa. The muted landscape instills a foreboding of some impending drama. Like the second coming. Or an alien invasion. So when in the distance I saw shepherds wedging into view on white horses, I eagerly took them for the horsemen of the apocalypse.

The Camargue is famous for its horses. Locals proudly brag of the highest equine density in Europe. Born bay or black, in the fourth year they begin to lighten until turning completely white. The Camargue horses are believed to have changed little with time, and their straight shoulders and heavy heads pop up on ancient rock carvings. It is unclear who brought them here. The Camargue expanses have seen Phoenicians, Romans, Greeks, and Arabs.

Today, the horses are looked after by gardians—shepherds who wear vests over colorful gypsy shirts and black hats, and carry trident-tipped lances.

Camargue bulls are second to horses in renown. They are born and die black, and their upright horns resemble a lyre. Gourmets salivate over the meat, but they are bred mainly for the tauromachia. It is bloodless fun—at least for bulls. First they are run by the gardians through the streets of Saintes-Maries-de-la-Mer, the Camargue’s unofficial capital, and then they are driven into the arena, where white-draped raseteurs are expected to pluck a cockade placed between the bull’s horns.

The locals come for the bulls; it’s the animals’ names, not the humans’, that get the bold-lettered treatment on posters.

Predictably, the bulls get smarter with time. Raseteurs often plunge into the stands to dodge horns. I saw one get gored in his behind. But instead of sharing the fate of their doomed Spanish brothers, the Camargue bulls are glorified on a par with soccer stars, and just like them perform season after season, grazing as they please and begetting the next generation of hot-tempered bovines in their spare time.

This Gallic incarnation of the Wild West, with its ranches and cowboys, is a recent import, as I learned while chatting with residents. Early in the 20th century, a local aristocrat named Folco de Baroncelli was so captivated by the touring Buffalo Bill show that he invited the whole troupe to Camargue. As feathered Sioux galloped around Baroncelli’s mas, or ranch, he had a vision of returning his beloved Camargue to a glory that had wilted since the French Revolution. He devised a dress code for peasants, turning them into gardians, and started bull runs. He molded a new cultural landscape that over the last 80 years has acquired all the vestiges of a bona fide tradition.

It turns out that Camargue owes much of its distinctive culture to outside influences. In the 15th century, the remains of two women who lived around the first century were discovered underneath the Notre Dame de la Mer church. A popular legend says that around this period, three Marys who were cast adrift by the Romans on a raft came ashore here: Mary Magdalene, Mary Jacobia (Jesus’s aunt), and Mary Salome, the mother of the apostles James and John. While Mary Magdalene set out to evangelize in the new land, legend has it that the two other Marys stayed.

One more woman was associated with them: Sara, who, according to a legend, is thought to have been dark-skinned. Her origins are murky; some believe that she had been a servant on the raft. A Provencal legend holds that she was a local princess of Egyptian provenance who welcomed the three Marys and was converted by them. It was only a matter of time before a handful of local Roma who would mingle with the faithful from Southern France on their pilgrimage to honor the two Marys at Saintes-Maries-de-la-Mer began to “trace” their origins back to this legendary woman who helped Christianity get a foothold in France. Roma participation in the pilgrimage was first attested in the 19th century and gained momentum in the 20th; Sara became known as Sara-e-Kali (black Sara), the patron saint of the Roma. Every May, Roma travelers come to Camargue to revere her the day after the two Marys are celebrated. So when I looked down from the roof of the fortress-like Notre Dame de la Mer on May 24, I saw the tiny town encircled by hundreds of Roma trailers and vans from all over Europe.

Despite the display of abandoned crutches, testimonials, and photos asserting Sara’s healing powers, the Catholic Church has not embraced her. Her black statue, which resembles the Hindu goddess Kali and is bedecked with a dozen gold-embroidered dresses, sits in a crypt whose ceiling has been blackened by candles, not in the sacral space of the church.

“Like the Gypsy community that she patronizes, Sara stirs up ambiguous feelings among the authorities,” a local priest remarked.

Claude Dumas heads the committee of clergy, government, and local business representatives tasked with ensuring that the largest Roma pilgrimage in the world does not create problems for local residents. Although many of these travelers come in motor homes with satellite TV, the old prejudices die hard. “Watch your bag and pockets,” the hotel owner advised me. “Thievery is on the rise.” Many shopkeepers forsook the holiday profits, lowering their shutters and leaving town while the national police moved in. The settled have always harbored fears of the nomadic.

Roma people have been persecuted for fortune-telling, heresy, and vagrancy in Europe since the 14th century. In various places they were forbidden to wear their colorful clothes, speak Romani, marry freely, or engage in their traditional crafts. In Romania, until the middle of the 19th century, Roma could be bought and sold. Up to half a million of them died in the Nazi camps. Until 1973, Switzerland had a law allowing the Roma children to be forcibly taken to and raised in non-Roma families. Today the 11 million Roma constitute the largest ethnic minority in Europe, but unlike the Jews, they never wanted their own state. “For me,” I heard someone say in Camargue, “Romanistan is where my two legs stand.”

Watching the Roma turn Saintes-Maries-de-la-Mer into a festive encampment, I felt a deep longing to partake and an angst—surely familiar to many of the Roma gathered there—over the non-belonging that prevented me from joining. Nonchalantly seductive women in fluffy skirts and bright shawls strolled among black-clad men bedecked with gold chains. Clan leaders mulled over business and toasted deals in open-air cafés. A couple danced between the tables with such intensity that they appeared to be having a knife fight. The town squares were alive with flamenco—often each corner had its own performer. It could be no coincidence, in this place whose culture owed so much to interlopers, that all this richness derived from the ultimate outsiders: Roma travelers. But just like other gadje, I was a spectator rather than a participant.

As I was passing a Roma family enjoying a feast out of an open trunk, a woman glanced at me. Heavy but still sparky despite her age, she swallowed the last beer from the can and, having read my mind, gestured toward my camera and asked: “Hey gadje, wanna click me?”

Registering my hesitation, she said, “Do not be afraid, our people did not forge the nails to crucify Christ with,” referencing an old calumny against her ancestors. “We stole some of them,” she winked, “so he suffered less!”

When the next day I was squeezed tight in the crowd of Spanish Gitans, French Manouche, German Lotari, and Roma from Eastern Europe, I entrusted the contents of my pockets to Sara’s protection. Her statue was carried out of the church, and the raucous congregation followed it towards the sea. Behind them the city fathers, dressed in period costumes, walked hand in hand with their wives in the old Arlesian dresses hiding under parasols. Mounted gardians framed the procession.

With a camera in hand, I kept backing off in front of them and ended up first on the beach, and then, as the gardians rode their horses into the surf, in the water. The crowd pressed harder around the statues as dozens of hands reached for Sara. Standing waist-deep in the sea, some Roma prayed, some played guitar, and some sang. A throng of wet pilgrims screaming “Sara! Sara!” raged in front of the horsemen who, facing the shore, lined up in a row protecting the saint from the rolling waves. While the water foamed around the horses, behind them stretched out the unperturbed expanse of the Mediterranean, with nothing to foretell of the next wave of outsiders destined for European shores.