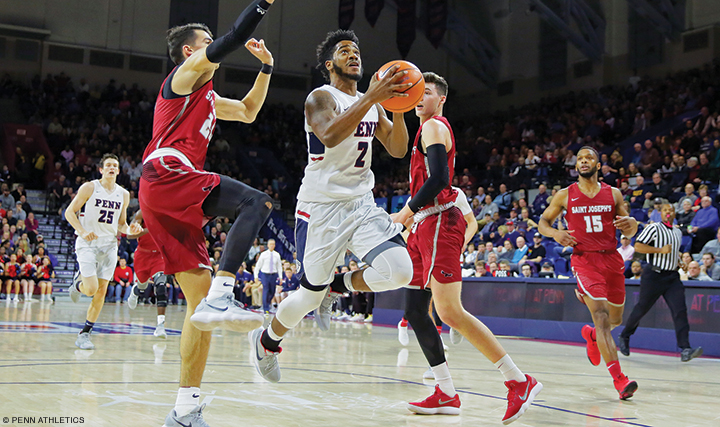 Men’s basketball has a morale-threatening 21-man roster—and its best start in a decade.

After the Penn men’s basketball team defeated city rival Saint Joseph’s in its final non-league game of the 2017–18 season, head coach Steve Donahue pointed to his squad’s depth as one of the biggest reasons why.

What made that statement especially remarkable is that the Quakers had seven guys injured for that game … and still managed to dress 14 players.

Welcome to a unique season of Penn basketball, in which Donahue has simultaneously dealt with a massive—and potentially morale-busting—21-man roster while leading the Quakers to their best start in more than a decade. (At press time, they had won their first six Ivy League games and 16 of their first 22 overall).

“It doesn’t make a lot of sense to people on the outside,” Donahue said about the size of his squad. “But that’s what makes this group kind of special.”

Donahue, in his third season as Penn head coach, admits that having 21 players in a sport in which only about eight or nine see game time is not always ideal. He says it’s the result of bringing in an unusually high number of new players, including transfers, to bolster the program upon taking over—as several holdovers from former coach Jerome Allen W’09’s tenure stuck around.

But Donahue has been pleasantly surprised by the results, insisting that not one player on the roster has checked out mentally, even when his playing time has dried up.

“These are incredible kids that are able to look at such a large roster and still come every day and play and work to get better—and, most importantly, help us get better—without the assurance they’ll ever get playing time,” Donahue said. “We talk about ‘the bottom 10’ all the time. We have a plan, particularly for the younger guys, that we believe in.”

Some of the youngest players, like freshmen Mark Jackson, Jelani Williams, and Eddie Scott, have sat out for all or most of the season to rehabilitate injuries and develop for future seasons.

It’s been a tougher grind for some of the upperclassmen, who are trying to regain some of the minutes they logged earlier in their careers before graduating. Seniors Matt MacDonald, a captain, and Sam Jones, a sharpshooter who played regularly during his first three seasons, have mostly been lost in the roster shuffle (though, in a rare appearance, Jones drilled five three-pointers in an impressive December win at Dayton). Junior Jackson Donahue, who hit the biggest shot of the 2016–17 season to get the Quakers into the inaugural Ivy League Tournament, also lost playing time midway through the season, while his classmate Jake Silpe unexpectedly emerged as a key reserve for January games against Temple and St. Joseph’s leading into the bulk of the Ivy schedule.

Silpe, a highly touted recruit who averaged over 20 minutes per game as a freshman, said it was difficult to lose his place in the rotation as a sophomore and the first part of his junior campaign. But instead of contemplating a transfer to a program with a less crowded roster, the point guard decided to improve the aspects of his game that were holding him back while taking Donahue at his word that anyone would have a chance to play.

But he admits that team chemistry is a concern with a bloated roster. For instance, back in 1998–99, when Donahue was ending his run as a Penn assistant, the Quakers committed fewer turnovers than any other team to reach the NCAA Tournament while ranking in the top 10 in the nation in three-point accuracy. That was also the last Penn team to have a traditional 12-man roster. Meanwhile, last year’s team had 19 players and ranked 247th in the country in assists.

Donahue posits that the rise of bigger rosters—a phenomenon that has spread to other Ivy League programs—is a result of competitive pressure in a conference that has improved from top to bottom in recent years. (In the 1990s, by contrast, Penn and Princeton were typically the sole contenders for league supremacy.)

“I think we all feel there’s a lot more competitiveness in this league now,” he explained. “We don’t have scholarships. And I sense that we all think we should try to give kids an opportunity. If he’s a great student, a great kid, why don’t we give him a chance?”

Donahue predicts that in three or four years, his roster size will shrink to around 15 as he recruits smaller classes. And he’s eager for that time to come. “One of the great things about coaching basketball is it’s a smaller group and an intimate environment,” he said, “and it’s difficult to develop great relationships with all these guys.”

But, for now, he’s grateful that his current crop of players have helped restore the program’s winning tradition, praising how all 21 of them “bought in” following an early February sweep of Brown and Yale at the Palestra.

“Some coaches are not comfortable with it,” he said. “And it’s not for everybody. I could have never done this at Boston College [where he coached from 2010-14]. Those kids, good or bad, would not understand walking into a gym, seeing all these kids, and asking, ‘Where do I fit in?’ But I think we get unique kids at this place that love to be a part of Penn basketball and understand that playing time has to be earned.”

Of all the ways for a season to end, the Penn men’s lacrosse team may have found the most devastating last year.

In the first round of the Ivy League Tournament, the Quakers took top-seeded Yale to overtime. Then a second overtime, then a third, and then a fourth. But Penn ended up on the wrong end of the second-longest game in the program’s 100-year history, dropping a 13–12 decision in the instant Ivy classic.

“It was fun and crazy and we were obviously heartbroken when that game ended,” senior midfielder Connor Keating said. “But as soon as the game ended, we brought our heads together and said, ‘We have a choice right now: We can choose to feel bad for ourselves or start to attack this next season.’”

Keating is part of a loaded—and motivated—senior class. Ranked in the top 20 nationally in most preseason polls, Penn returns its 11 top scorers from a year ago—including Keating, who was named a third-team All-American by the United States Intercollegiate Lacrosse Association (USILA) last year—as well as standout junior goalie Reed Junkin, who shared 2016 Ivy League Rookie of the Year honors with junior Simon Mathias.

Are the Quakers ready to win the Ivy League and return to the NCAA Tournament for the first time since 2014, when they lost to neighborhood rival Drexel in the opening round?

To get back to that point, they not only have to beat their league rivals when Ivy play opens in mid-March but prove they can stack up against national powerhouses when they face Michigan, Maryland, Duke, and Penn State in non-conference play.

“We think we’re right there,” said Keating, whose two older brothers played at Duke. “It’s exciting going into the season. Guys are fired up, which I haven’t seen as much in other years.”

As for making a deep NCAA run, Keating, who lives with seven of his senior teammates, added: “That’s all we can really talk about in our house. That’s all we’re thinking about all the time. We’re really hungry.”