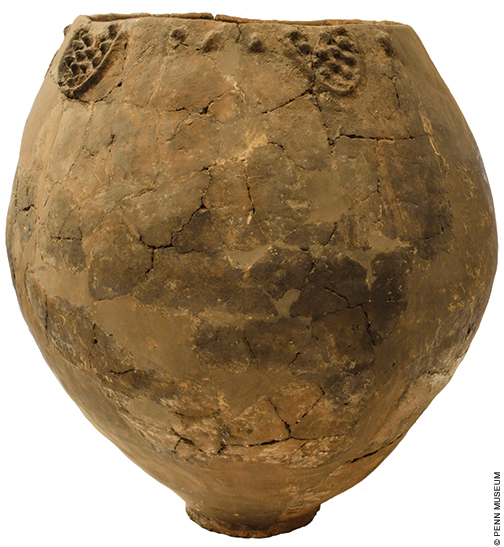 Gaumarjos! So say drinkers clinking glasses in Georgia, which can now lay claim to the oldest grape wine known to man. The country, which spans the south Caucasus mountains between Russia and the Middle East, has a tradition of fermenting wine in amphora-like clay vessels known as kvevri, which are often buried underground. An analysis of residues in two very old jars from the Kura Valley has pushed that history all the way back to Neolithic times.

An international research team led by Patrick McGovern Gr’08, who directs the Biomolecular Archeology Project at the Penn Museum [“Man, The Drinker,” Jan|Feb 2010], examined vessels from two Neolithic sites south of Tblisi, Georgia’s capital. They discovered a blend of organic acids (succinic, malic, tartaric, and citric) in proportions that correspond closely with grape wine. Along with other evidence—including pollen cores, and previously reported genetic analyses indicating the region as a source of a wide range of domesticated wine grapes (including cultivars like Pinot Noir and Syrah, which remain commercially important today)—the finding pushes grape wine production back to 6000 BCE. The finding was published in the journal PNAS in October.

The small villages that produced it appear to have appreciated the old hostess’s adage: better too much than too little. One of the jars McGovern’s team examined was nearly a meter tall and a meter wide, giving it a capacity of 300 liters. —TP

Arts and Culture
A Century Later, The Sphinx Moves Again