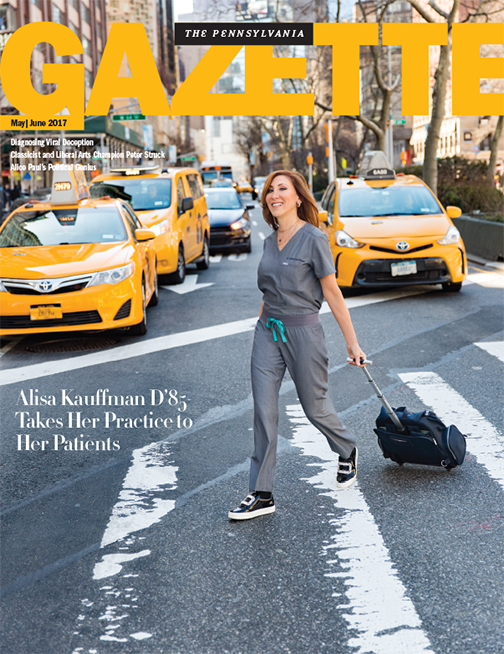 House Dentist
From Holocaust survivors, to stroke victims, to the garden-variety centenarian next door, Alisa Kauffman’s patients have one thing in common: an inability to travel to a dentist’s office. So she brings her practice into their living rooms, bedrooms, and kitchens.
By Trey Popp

Peter Struck’s Odyssey
The classical studies professor—whose scholarship traces how intellectual concepts and literary works were received and interpreted in ancient Greece and Rome—is an ardent champion of the continued vitality and relevance of liberal arts education in our own time.
By Jamie Fisher

When Lies Go Viral
Fake news may be as old as news itself, but the viral deceptions mutating on the internet are affecting the institutions that inform our democracy. Some Penn scholars offer analysis, context, and concerns.
By Samuel Hughes

The Serene Strategist
To her mother, alumna Alice Paul was a “mild-mannered girl”; another observer compared her demeanor to “the quiet of a spinning top.” Her leadership in the fight to get US women the vote was a remarkable mix of unyielding commitment and savvy politics.
By Dennis Drabelle

NOTES FROM THE UNDERGRAD Signs of the times in Cuba

ELSEWHERE “We are not to meet again”

What $22 million in Annenberg fellowships accomplished in 10 years

Walls and doors: examining immigration’s past and future

In latest President’s Prizes, four student groups get $100,000 each

BOOKS A life of Kahn. You Say to Brick