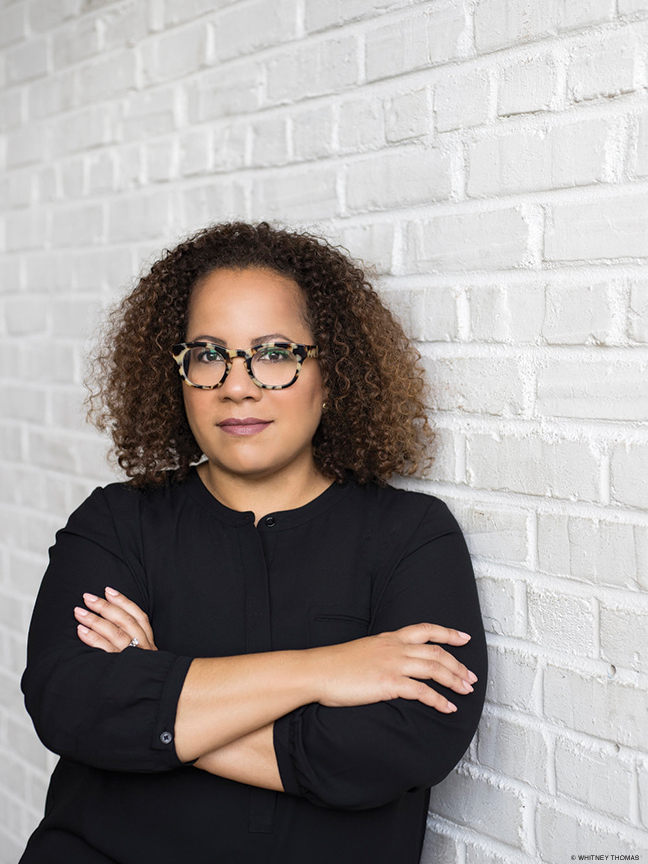 Class of ’94 | Back in 1998, Erica Armstrong Dunbar C’94 was sifting through the Historical Society of Pennsylvania’s electronic archives when she spotted an advertisement in the May 26, 1796 issue of Claypoole’s American Daily Advertiser. It began:

Absconded from the household of the President of the United States, on Saturday afternoon, ONEY JUDGE, a light Mulatto girl, much freckled, with very black eyes, and bushy black hair … Ten dollars will be paid to any person, (white or black) who will bring her home, if taken in the city, or on board any vessel on the harbour; and a further reasonable sum if apprehended and brought home, from a greater distance …” 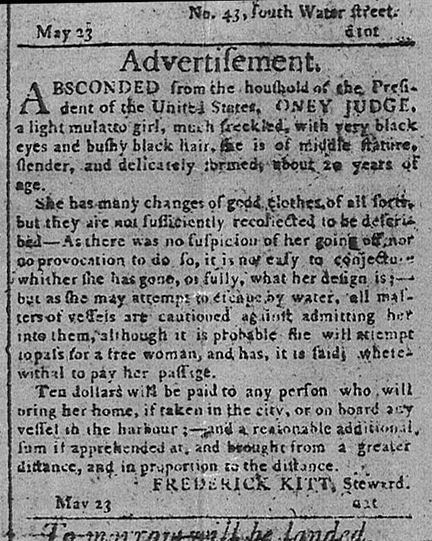 The President, of course, was George Washington, and Judge (whose real name was Ona) was a runaway slave owned by his wife, Martha.

“As someone focused on African-American women’s history, I thought, ‘Why don’t I know about this?’” recalls Dunbar, who was doing research for her doctoral dissertation for Columbia University at the time. “It set me on a path of discovery.”

It would be almost two decades before Dunbar would get to share Ona Judge’s story. In her new book, Never Caught: The Washingtons’ Relentless Pursuit of Their Runaway Slave, Ona Judge (Atria), Dunbar recounts how Judge was brought from Mount Vernon, the Washingtons’ plantation in Virginia, to serve the First Family in Philadelphia, which became the nation’s temporary capital in November 1790.

At the President’s House, located in what is now the 500 block of Market Street [“Remembering the President’s House, Slaves and All,” Mar|Apr 2004], Judge encountered, for the first time, black people interacting freely in society. The young woman made her own bid for freedom toward the end of Washington’s second term after learning that Martha Washington planned to transfer her ownership to her granddaughter as a wedding present.

Much to the Washingtons’ consternation, Judge eluded all efforts to recapture her. She settled in Portsmouth, New Hampshire, marrying and having three children of her own.

To Dunbar, now a professor of Black American studies and history at the University of Delaware and director of the Program in African American History at the Library Company of Philadelphia, the timing seemed right to finally tell Judge’s story.

“The book is about resistance and fighting for American freedom,” she says. “People are still very concerned and aware of what the nation is supposed to give to its citizens. I think there have always been inherent contradictions with some of those promises. We see that through Ona’s story, and we can definitely make some connections to the present.”

The Philadelphia native always loved history, but didn’t begin making her own connections with African-American contributions until she got to Penn. She credits a program for incoming freshmen, then called the Afro-American Studies Summer Institute, for helping introduce her to the breadth of African-American history. Dunbar took every course on the subject, pursuing a double major in history and Afro-American studies.

“What surprised me so much was that there was so much content I had never heard of,” she says. “By focusing on African-American history, it allowed me to have a better understanding of American history.”

As important as the Washingtons are to the story, Dunbar strives to keep the focus on Ona Judge. The book took some six years to write and research, partly because, as Dunbar notes, fugitives do their best to stay under the radar. Fortunately, Dunbar was able to glean key facts from interviews Judge gave toward the end of her life in two abolitionist newspapers. Dunbar’s research also took her to the Library of Congress, where she examined Washington’s papers. However, she wasn’t able to fully answer key questions about the loss of Judge’s husband or the indentureship of her children.

“I wanted to know her feelings,” Dunbar says. “I was able to get that from the correspondence for the Washingtons and other people, but I don’t have that from her.”

In piecing together Judge’s story, Dunbar drew on her research for her first book,
A Fragile Freedom: African American Women and Eman cipation in the Antebellum City (Yale University Press, 2008).

Given the volatility of writing about slavery and the founding fathers, Dunbar anticipated pushback. But few if any critics have questioned her portrayal of the Washingtons as slaveholders. She credits the work of scholars like Annette Gordon-Reed, Pulitzer Prize-winning author of The Hemingses of Monticello: An American Family, who in turn praised Dunbar for creating “a portrait of a woman whose life reveals the contradictions at the heart of the American founding.” Her own lucky timing also played a role: last fall Mount Vernon unveiled an exhibit focused on Washington and the lives of the enslaved.

“I would like to believe that the larger public is ready for, and desirous of, a more complicated understanding of the founders and slavery,” she says.

For those visiting American landmarks like the Liberty Bell or Mount Vernon, Dunbar hopes the book will make them “think about the histories of those locations differently,” adding that her “goal was for scholars and the public to see the early years of the founding of this nation through the eyes of the enslaved—to tell this narrative that typically comes through the lens of the founding fathers, and see it through a different lens.”

Dunbar has been gratified by the emotional response to the book.

“The story evokes so many stories and connections that were for me unimaginable when I wrote this book,” she says. “I just wish there was a way for Ona to know that so many years after her life ended, she is being seen as a hero.”