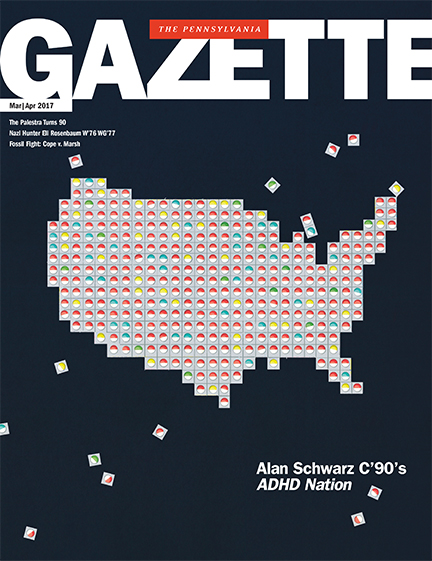 Alumnus, journalist, and self-described math geek Alan Schwarz saw something rotten in the number of kids diagnosed with ADHD and treated with amphetamines. He responded with a powerful series in The New York Times—and an even more powerful book.
By Samuel Hughes

In Pursuit of Justice

Over more than three decades, mostly at the US Justice Department, Eli Rosenbaum has made a career and a calling out of tracking down Nazi war criminals and more recent human-rights abusers.
By Julia M. Klein

Dinosaur hunter Edward Drinker Cope studied briefly at Penn in his youth and ended his days as a faculty member at the University. In between, the impulsive and driven scholar churned out more than 1,400 scientific publications—and exchanged many harsh words—in an epic battle with his more methodical rival, Othniel Charles Marsh of Yale, for primacy in the nascent field of paleontology.
By Dennis Drabelle

NOTES FROM THE UNDERGRAD Joy of (backcountry) cooking

EXPERT OPINION “Not being in control is part of the discipline”

Shakespeare has some company in Fisher-Bennett Hall

Panels examine foreign policy, the economy, and “truth” in the Trump era

Senator Cory Booker of New Jersey to speak at Commencement

MUSIC An “extraordinary evening” at the Penn Museum

Penn alumni star in Animal Planet’s Life at Vet U

Mark Kaufman C’89’s key to musicalizing a movie: does it sing?