Extracting Signatures from Crowds and Bananas 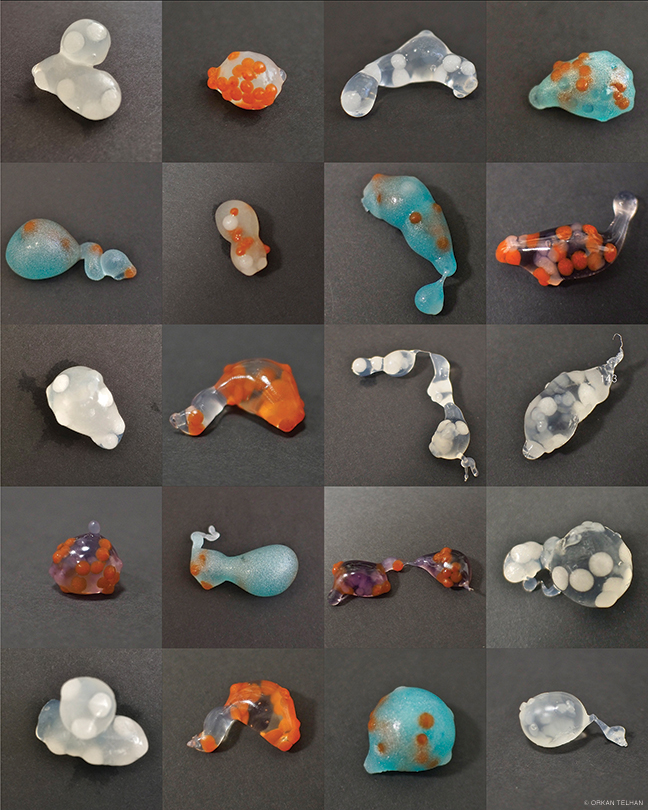 Picture a prehistoric handprint on a wall, deep inside one of the ancient caves at Cueva de las Manos, Argentina. This is me, it says, in a voice that speaks across millennia of darkness. I am here. Or picture an impromptu brushstroke in Chinese calligraphy, its chi expressing the life force that energizes all things. Or picture your own signature, which not only identifies your uniqueness but your presence, your power, and your promise.

Now consider how other living organisms besides humans have a singular, essential “signature”—a Siberian tiger’s claw marks, the murmuration of a flock of starlings, a tulip’s scent—or how even non-sentient phenomena have their own autonomous signatures: self-driving cars, computer viruses, Reddit’s hivemind, a Facebook meme.

You have now entered the studio-lab mindspace of Orkan Telhan, the promethean scholar-artist-designer and assistant professor of emerging design practices at Penn Design. Telhan’s work investigates the power and promise of signatures—our world of teeming flavors, odors, groupthink, and news cycles that shape our human sensory realities and are in turn shaped by human minds and hands. The idea that everything has a signature has its roots in the 17th century, but when Telhan applies it to our designed world of machines and interfaces as well as to living organisms, he is re-imagining, if not revolutionizing, contemporary design.

His own signature has an international flair. Telhan was born in Germany to Turkish parents, then moved to his ancestral homeland when he was 7 and later studied at Bilkent University in Ankara. He worked as a design director in Belgium, quit to become an artist, came to the US for grad school (MFA from SUNY-Buffalo and a PhD in design and computation from MIT), and finally made his way to Penn. The rapidly evolving landscape of design makes his field exciting terrain.

“Every day, the boundary between who is a signature bearer and who is a signator—Whose subjectivity is created by whom?—becomes increasingly blurred,” he says. “How shall our signatures define us, even as they define themselves?”

How indeed. What if we could re-assemble the scent of sandalwood into a designable artifact? Create glowing screen images with bacteria-powered batteries? Display user-generated media to disarm xenophobia? Or bake a batch of genetically controlled donuts? These are just a handful of interrogative design projects presented in Telhan’s 2016 book, Designature: The Nature of Signatures in Art and Design (Revolver Publishing). In its pages, science and art come together in unexpected encounters that merge machines and microbes, bitstreams and behavior, to create what Telhan calls “experimental artifacts,” new events where the signature of the designer and of the designed cross paths.

Most artists work with materials that are safe and predictably malleable: paint, bronze, marble, pixels. But when an artist works with artificial cells, edited organisms, synthetic genes, or algorithms that learn to adapt and revise themselves, “you’re dealing with a kind of indeterminism,” says Telhan, “and, in time, they diverge from what they once were.”

Take bananas, for example. Or, more precisely, the Cavendish banana, the standardized, mass-marketed cultivar grown and consumed around the world. As a descendant from a single specimen reared on the stately grounds of Chatsworth House in 1830 (and named after William Cavendish, sixth Duke of Devonshire), the banana as we know it is the pedigreed outcome of chance and human preference. But since the Cavendish is seedless, it is unable to reproduce on its own and to diversify its gene pool to resist disease and infection. Today the Cavendish banana is in danger of being wiped out by Panama disease, which is spreading, plantation by plantation, across the globe. The results could be catastrophic—economically, ecologically, geopolitically.

In his Microbial Design Studio, Telhan—wearing his trademark cabbie cap and white lab coat in place of the traditional beret and painter’s smock—has proposed a novel and promising solution. He calls it Bananaworks, a series of tasty concoctions made of probiotics, microbe-sourced proteins, and wild banana water. The idea is not to artificially clone a banana or to chemically mimic banana flavor, but to imply “banana-ness”—an artfully insinuating design strategy that relies as much on human engineering as it does on the agency of the banana’s own chemical signature.

“Instead of mixing existing chemical compounds with each other,” Telhan explains, “we use the genetic makeup and the metabolic processes of banana microorganisms to generate new compounds that can vary over time. Like bananas in the wild, but in a more accelerated and supervised fashion, and without the costs of land, labor, and politics of exploitation.”

This ability to preserve the capacity to change, to create a designed artifact that can go on to differentiate, is indeed a new kind of alchemy. It also raises tantalizing questions: How did bananas evolve to appeal to humans in the first place? And why?

It’s not only with living organisms that humans have this ongoing, reciprocal relationship. Increasingly, our own designed environments and devices have created new feedback loops between ourselves and Fitbit watches, Google page rankings, teachable thermostats, and Amazon’s Alexa. In this kind of world, it takes an artist to investigate the material objects and the institutional, even notional, infrastructures we’ve created, and their capacity to influence fundamental values of humanness.

In one such interrogative project, “United Colors of Dissent,” Telhan probes the dynamic and evolving interplay between data displays and didactic discourse. Participants freely gather in a public space, collectively respond to a series of questions on their phones or tablets, and see themselves represented in a public display as color-coded dots of light. With each question—say, about immigration, healthcare, the rise of nationalist politics, environmental policies—they are given time to discuss their opinions with friends or strangers standing beside them. As they respond, they can track themselves in real time on the display and see the immediate impact of their responses relative to other participants.

“Instead of presenting issues as contentious, us-vs.-them contests, ‘United Colors’ allows everyday strangers on the street to experience us and them,” says Telhan. “When we see our beliefs positioned not so much as competing in a winner-take-all battle, but rather in service of addressing societal problems, and when we see new information that challenges our assumptions rather than merely confirming our biases, we are more likely to realize the power and promise of ‘this little light of mine’ as the basis for a critique of entrenched institutions and policymakers.”