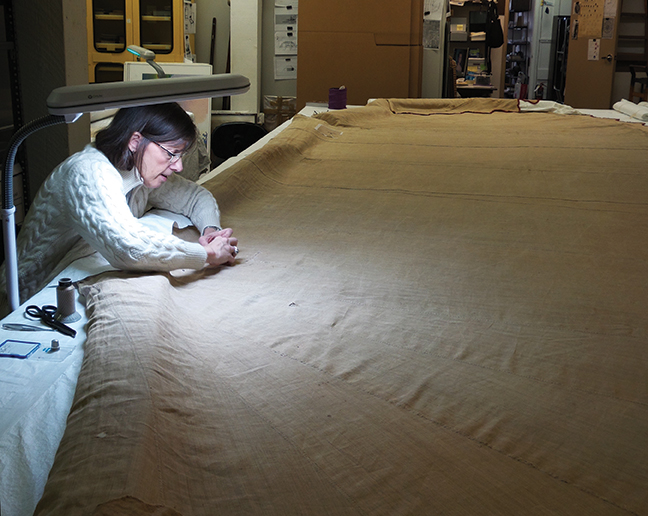 Class of ’78 | Textile conservator Virginia Jarvis Whelan FA’78 has left her mark on a lot of things, including the cotton shawl that Mohandas Gandhi draped around himself; the tiny wool sweater that warmed Fala, Franklin Delano Roosevelt’s Scottish terrier; and the blue silk American flag that George Washington carried wherever he went. But only the most trained eye could tell that she’d practiced her craft on them.

Recently, she’s taken on her most ambitious project to date. To prepare a signature exhibit for the just-opened Museum of the American Revolution in Philadelphia, she and an intern spent more than 500 hours stabilizing and repairing the linen tent that Washington used as his command station during the Revolutionary War. Crafted in Reading, Pennsylvania, while the general was encamped at Valley Forge in early 1778, the tent also saw duty at the 1781 siege of Yorktown. Measuring 20 feet by 15 feet, it’s relatively plain save for a scalloped valance adorned with red twill tape that’s stitched to its edge.

The 10-foot-tall piece was displayed up until the mid-1990s at Valley Forge National Historical Park, where it had periodically undergone conservation over the years. For the new museum, Whelan reversed parts of that work to take advantage of new techniques like high-resolution digital imaging. 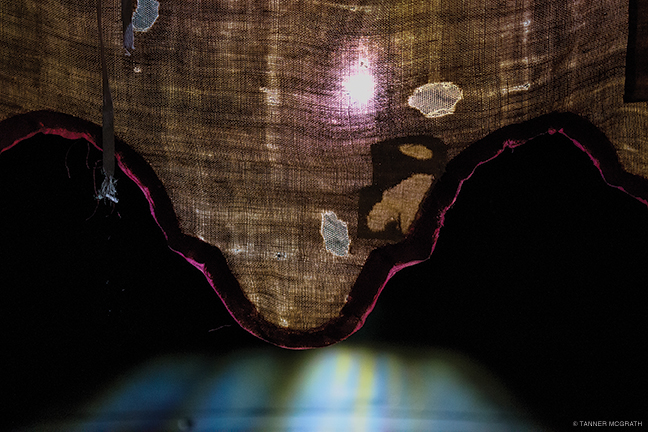 “It’s the biggest textile I’ve ever worked with, and probably ever will work with,” she says, praising the “all-star team” of structural engineers that worked on it with her for more than four years. “The tent trumped all. Whatever it needed, that was the best plan.”

From field tents to pet togs, the personal belongings of world figures offer Whelan “an incredible feeling of connection to the person who made or used them,” she says. “They become real, they have energy.” But not everything she touches has historic luster. Some objects have a more modest sheen, visible only to those closest to them.

“A woman brought me six needlework pieces of different Philadelphia sites, like the Liberty Bell,” she remembers. “Her husband had stitched them to keep his mind and hands busy while he was trying to quit smoking. The couple had six children and the husband had since died, so she wanted to give one to each child. I loved being able to help them have that memory.”

While some conservators specialize in clothing or tapestries, Whelan concentrates on a third specialty: flat objects such as the ones just mentioned, or banners or samplers. Within that domain, she’s worked on everything from pre-Aztec textiles to 19th-century campaign flags emblazoned with political slogans.

Whelan came to the field relatively late in life. After graduating from Penn with a degree in fine arts, she moved with her husband, Richard Whelan C’78, to New Orleans. (The University is “in the family blood,” she says. Two of her three siblings are graduates, as were her father and grandfather.) While Richard attended law school, she worked at an ad agency. When the couple returned to Philadelphia and started a family, Whelan became a stay-at-home mom to their three sons.

Fifteen or so years later, as she prepared to reenter the workforce, she pondered her skills and interests.

“I realized that I’m more of a three-dimensional person; I’m good with my hands,” she says. She enrolled in a short course on early American decorative arts at Winterthur, where the professor mentioned that a conservator “needs art history, hand skills, and … chemistry.” Though she initially balked at that last criterion, she quickly came around, and spent the next three years studying general and organic chemistry at Winterthur/University of Delaware, while building on her art history background.

Conservation is interdisciplinary, she says. “It allows me to use my hand skills and it requires that I understand the historical, cultural, and social context of the object.” The chemistry comes into play when the conservator tries to dig more deeply into the story of the fabric itself.

Whelan’s skills were seriously tested with the Washington tent. Her job was to stabilize small holes that might otherwise fray. The painstaking process involved inserting an extremely fine needle and thread between the fibers of the tent’s weave and sandwiching the holes with stocking-like netting. To repair one larger, 30-inch-square hole at the back of the tent, Whelan used digital inkjet printing to reproduce, as closely as possible, a new patch. She was also involved in ensuring that the structural engineers who had to devise a way to display the tent as if it were pitched in the field did so without stressing the centuries-old fabric.

The museum also charged Whelan with conserving other artifacts, including the Washington flag and a sampler from 1787.

“It was designed and stitched by a 14-year-old girl, Margaret Grover from Philadelphia, and it features verse from the Lord’s Prayer,” she says of this last item. “Needlework was an integral part of the education of young girls in the 17th, 18th, and 19th centuries. It was a vehicle to educate them not only in the fine art of stitching, but to teach them their alphabets, numbers, Old Testament stories, and verses or hymns as examples of virtuous behavior and thought.”

The idea of education through hand-work, and passing down skills through the generations, is “timeless—and thank heavens it isn’t limited to mother/daughter, or grandmother/granddaughter,” she adds. “I drew and made things with my three sons when they were growing up, and I have every intention of [doing the same] with my two grandsons.”