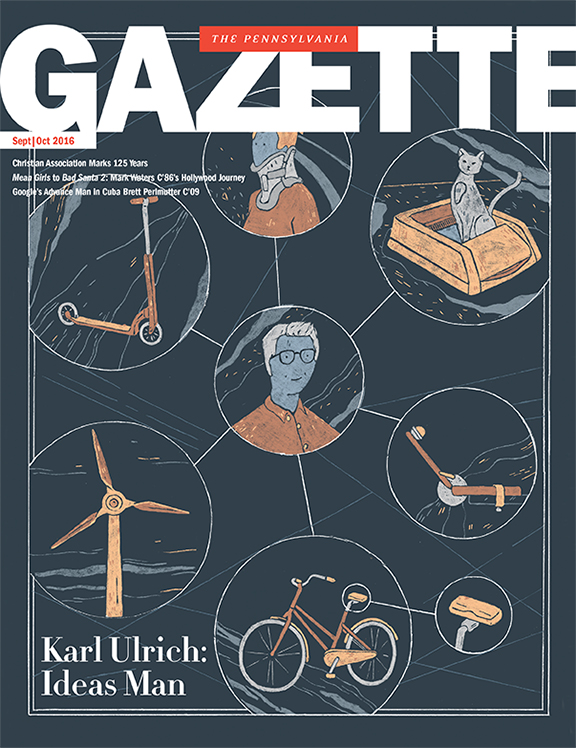 With an innovation portfolio that ranges from medical devices to folding bicycles to social-impact enterprises to junk food, Wharton professor Karl Ulrich has every justification to bask in entrepreneurial mystique. Only that’s exactly what he sets out to demolish in the classroom. By Trey Popp

Mean Girls director Mark Waters C’86 is taking a shot at R-rated comedy with Bad Santa 2 this Thanksgiving—and still trying to figure out his place in ever-evolving Hollywood. By Molly Petrilla

The Christian Association at 125

At the turn of the last century, the CA pioneered the idea of service at Penn with settlement houses and summer camps, and has since been at the forefront of anti-war protests and movements for civil, women’s, and LGBT rights. In the 21st, it’s still providing a “safe space” for students and making a difference on campus and beyond. By Dave Zeitlin

The Man Who Put Yellowstone On the Map

Brett Perlmutter C’09’s mission was to open up Cuba to the internet. To say that it was politically sensitive is an understatement. But the timing was just about perfect. By Alyson Krueger

The long road to finding and translating Kerouac’s French writings

Starting over, in football and field hockey

Bill Squires C’71 has “never been booed” for singing—roared at, yes