Of Monsters and Ramen 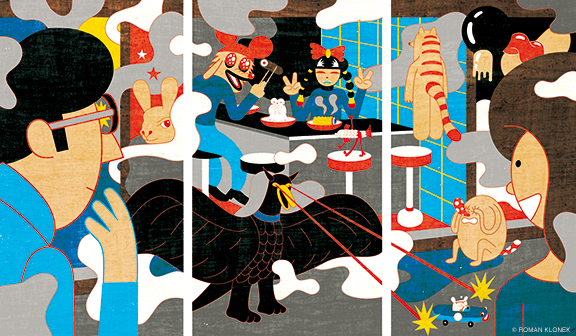 When Frank and Linda Chance return to Penn’s Department of East Asian Languages and Civilizations this fall, they’ll be teaching courses that sound almost too fun to belong on a college transcript: “Monsters of Japan” and “Sushi & Ramen: Global Food,” respectively. But their light-hearted offerings follow a spring and summer of rigorous academic and physical endeavors.

For instance, Linda, associate chair and associate professor of Japanese language and literature, helped organize a three-day workshop on deciphering Edo-period woodblock manuscripts inked in hentaigana and kuzushiji—practically untranslatable variations of the standard syllabary of Japanese writing. “These older languages look so lovely, but you can’t even tell where one character ends and another begins,” she says. “So we get together and Skype our master sensei from Cambridge and puzzle through how to read them.”

Meanwhile, Frank, an adjunct associate professor, guided a group of middle school teachers on a two-week excursion to Japan, as he has every summer since 1997. Funded by the United States-Japan Foundation and co-sponsored by Penn, the annual tour is part of a longer program that includes preparatory sessions and a post-trip presentation of a curriculum related to some aspect of Japan for their students. Aimed at training American teachers to teach about Japan, it’s always an eye-opening experience, Frank says. “Hiroshima is a highlight—we usually speak with a survivor.”

From Rodan and ramen to esoteric textsand sacred sites, the Chances have dedicated their professional lives to exploring seemingly every aspect of ancient and contemporary Japanese culture. She’s an expert in prose from the medieval era, and he specializes in early modern Japanese art. Even if it takes making maki rolls with their students in the tatami-matted tearoom of their West Philadelphia home to spread the fever, they’re game.

“I teach all kinds of things, including ‘Introduction to Japanese Civilization’ and ‘Classical Japanese Language,’” says Linda. “My interest, though, is always in getting students to look at Japan. I’m constantly figuring out ways to entice them—and students are really interested in topics like sushi.” When she has offered the course as a non-credit preceptorial, up to 600 applicants have vied for 10 spots.

For her, exploring Japanese food—whether by reading an anthropologist’s take on Tokyo’s Tsukiji wholesale fish market or a history of ramen noodles— is a way to spark discussions about issues like cultural authenticity in the global era. Japan, she says, is “so much like any other place, while also so different. Studying and teaching about Japan is an excellent way to get oneself and one’s students beyond the parochial and the unexamined, and into the critical and the complicated.”

Frank aims for similarly lofty goals while showcasing lowbrow movies. “Monsters are interwoven into Japanese history and mythology,” he says. “Japan’s oldest chronicle, Kojiki, tells the tale of a hero who kills a giant snake and finds a magical sword within its body that will get passed down from generation to generation.

“A lot of my students know this stuff—they’re the manga and anime crowd, or they’re absolute Godzilla devotees or whatever,” Frank continues. “But then we examine more closely how different cultures and eras interpret, say, Godzilla.” Gojira, the original 93-minute Japanese film, released domestically in 1954, is decidedly more anti-nuclear—not to mention scarier—than the familiar 1956 American version, a chopped-up mixtape with 37 minutes of Raymond Burr inserted. “The American version becomes a story of science conquering nature,” Frank notes, “whereas in the Japanese version [which was only officially released in the US in 2004], it’s science perverting nature.”

The Chances, who have been married for more than 40 years, met while attending the University of Kansas. Neither started with an interest in Japan.

A Kansas City native and the only one of his social set with a car, math major Frank often served as designated driver when his friends needed a lift downtown to participate in Sunday afternoon love-ins. “I realized that if I sat in the park and did all the things that happened at those gatherings, I wouldn’t be able to drive anyone home,” he says with a laugh. “So I went next door to the art museum, and found myself drawn to the Asian galleries.”

Linda came from South Jersey to the “Athens of the Bible Belt” because her parents weren’t keen on sending her to a big city college, and Kansas offered Russian art. “I wanted to be an art restorer and I was attracted to icons,” she laughs. “History of art was a common interest for us.”

“I was enrolled in an intensive German language course and it didn’t, shall we say, suit my personality,” Linda recalls. “Once, the instructor brought me into her office—which was almost as long as this conference room—and she said, ‘You stand at one end and I’ll stand at the other, and please speak loudly enough so that I can hear you.’ In German, YOU NEED TO SPEAK UP,” Linda continues, her voice rising. Then, lowering it, she says, “In Japanese, we don’t speak that loudly, and in fact there are places where we don’t speak at all.”

While she was a senior, Frank traveled to Japan to teach conversational English and she joined him for a semester of independent study. From the late 1970s onward, the couple spent time together and separately in Japan and in big cities on the American West Coast, all the time pursuing degrees and teaching gigs.

When Linda completed her doctorate at UCLA in 1990, she was offered a position at Penn and, at last, the two found themselves in the same place. Frank held a variety of executive positions at Shofuso, the Japanese House and Garden in Fairmount Park, before eventually winding up at Penn himself as the associate director of the Center for East Asian Studies. When that position was eliminated after the Center lost some funding earlier this year, he retired from administrative positionsto work on writing projects, spend some time with monsters, and, of course, travel. Recently, he embarked on a pilgrimage that took him to 88 temples on Shikoku, the smallest of Japan’s four main islands.

“I walked for 43 days, took 1.8 million steps, covered 750 miles,” he says, the math major in him rising to the fore. “We always come back from Japan having learned something new,” Linda adds. “You can learn and think about life through Japan or, say, reading The Tale of Genji, just as you can through Shakespeare or other canonical touchstones.”