Summer in the Kingdom 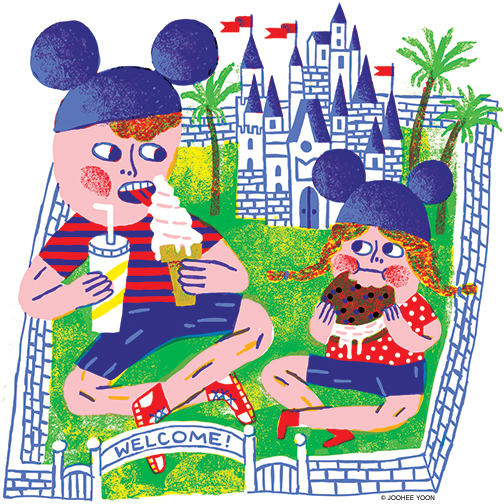 “Real life evaporated when I pushed through the turnstiles, and I was content to leave it behind.”

By Genevieve Bouchard | It was the summer of 2005, and my parents had a problem. I was 11 years old and my brother was going into eighth grade. Our mom and dad, who worked full-time, were put off by the cost and inconvenience of day-camp, which charged by the minute for any pick-up later than six o’clock. But they didn’t want to leave us home alone, wandering through the house and neighborhood, getting into who-knows-what. So they surveyed their options, and landed on a scheme that any other freshly minted elementary school graduate could barely have dreamed possible. They bought two season passes to Disneyland. At $300 per child, they reasoned, unadulterated access to the Happiest Place on Earth was too good a bargain to leave on the table.

Logistically, it was perfect: we lived close enough to the Magic Kingdom to hear the boom of the nightly fireworks show from our beds, its daily rumpus commenced half an hour before my mother was due at work, and my father got off early enough to pick us up before dark. Every morning we were unloaded at 7:45, with instructions to return to the drop-off lot 10 hours later—or suffer my dad’s crankiness if we kept him circling after 6 p.m. We didn’t have cell phones and couldn’t be trusted with a credit card, so my parents armed us with brown-bag lunches, five dollars apiece, and aluminum whistles that we were to blow if we got lost or separated.

This innovative parentingstrategy raised more than a few eyebrows in our neighborhood, as though leaving us at a theme park constituted some overindulgent form of abuse. In our upper-middle-class suburb, it simply wasn’t permissible to leave a pair of rising middle-schoolers unsupervised. After all, what would we do? How could our parents be sure that we were okay? Never mind that my mother and father understood us to be capable of handling ourselves in a public place. Using Disneyland as daycare was an act of unthinkable subversion—though the full extent of the neighborhood’s censure was lost on Skyler and me. We just knew that none of our friends were allowed to come to Disneyland with us.

On the night before our first day, I quivered with excitement, unable to sleep at the prospect of meeting Ariel and receiving her signature in my autograph book, or seeing Mickey Mouse in person. Skyler may have whined about relinquishing his GameCube for the whole summer, but I was headed for the promised land, the origin of all the stories from my childhood, the place my favorite characters called home.

As we bounced eagerly into line the next morning, waiting for the park to open, Skyler and I opened our maps and negotiated a plan: We would hit the biggest attractions first, before Disneyland started filling up. We’d save Splash Mountain for mid-afternoon, when the heat became unbearable. Skyler would accompany me on the Indiana Jones ride—as long as I agreed to take the ferry over to Tom Sawyer’s Island with him. At 8 a.m. on the dot, the green gates opened and the sound of Mickey Mouse’s cheery whistle rang out as our passes were scanned. Before we knew it, we were tripping over our sneakers in haste to get to the Matterhorn, marveling at the new world we’d entered.

That summer, I came to believe that nothing bad could ever happen at Disneyland. It wasn’t even that naïve to think so. A hidden network of cameras, sensors, and guards scrutinized every nook and cranny of the kingdom, whose omnipresent surveillance operation was rarely visible but always felt. Everything was too perfect not to be the result of total control. Smiling janitors in all-white uniforms hustled to scrape up gum even as it still glistened with the saliva of whatever careless park-goer had spat it out moments before. I wondered whether their speed derived from their sheer numbers, or if there were enough closed-circuit cameras to dispatch a custodian to the site of of every Bubble Yum ejection in real time. Contrary to the beliefs of my parents’ paranoid friends, the Walt Disney Company had engineered its realm to eliminate any possibility of mischief, especially by two wandering pre-teens. And every worker in the kingdom was “in-character,” providing such beaming service that we never encountered anyone, even among visitors, in any sort of conflict. The closest thing to trouble that I witnessed was the tension emanating from sweaty Midwestern families grimly determined to make the most of their Disneycations. Wearing souvenir wardrobes and puzzling over wide-open maps, they held up foot traffic as they tried to find the quickest way to Toontown.

Yet even though the perfection was contrived and the magic overdone, I embraced the fantasy anyway. I could suspend worryalong with disbelief as we entered the gates. Outside the park, cracks had started to appear on the surface of my happy family, and the state of my parents’ crumbling marriage floated at the edges of my adolescent awareness. But real life evaporated when I pushed through the turnstiles, and I was content to leave it behind. I had my first taste of delicious adulthood that summer, without the burden of adult responsibility. For 10 hours every day, I was allowed to make my own choices—in collaboration with Skyler, of course—and I didn’t need anyone’s permission. If I wanted to eat a churro at 9:30, I could buy one with my daily five-dollar bill and have enough change left over to buy a lemonade. If Skyler and I wanted to ride the Disneyland Railroad around the park’s perimeter for hours, we could—and we often did, liberated by our season passes from the urgent need to make the most of every minute. We were tantalizingly free to do what we pleased.

One of our favorite ways to spend a sweltering afternoon was to buy Toll House ice cream sandwiches and scamper into Main Street Cinema, a dusty old attraction that was fashioned after a movie theater in Walt Disney’s hometown of Marceline, Missouri. We discovered it one day in a desperate attempt to escape the stifling heat and crowds—it had no security guards that we could see, and no line. We felt as though we’d stumbled on a closely guarded secret, an almost-private respite from the excitement that never died anywhere else in the park. The films weren’t particularly interesting, but it was a cool, quiet place where no crabby families could blindside us with a double-wide stroller. It felt like a relic of the Disneyland that existed in 1955, when the park first opened. It was a single, dark room with black velvet curtains on the walls. Three screens played continuous loops of black-and-white Mickey Mouse cartoons. Skyler and I sat crisscross-applesauce on the wooden floor in the center of the room, munching our dripping ice creams and watching the cartoons play all the way through, once, twice, a third time. Nearly every afternoon for the rest of the summer, we repeated the ritual, savoring ice cream sandwiches on the floor of the theater-room, enjoying our little break from fun as Steamboat Willie played over and over.

The only headline attraction whose charm never dulled for me was Splash Mountain. Unfortunately, Skyler despised it, and my parents’ one explicit rule was to stick together at all times. But I loved the ride, so we struck a bargain. He agreed to brave the watery abysses one time each day. After that, he entertained himself in a Critter Country gift shop, running his hands through buckets of collectable pebbles and fondling feathered cowboy hats, while I entered Splash Mountain’s single-rider line, which circumvented the endless queue of families waiting to ride together. The ride was fashioned to resemble a hollowed-out hillside, with sticks and tufts of grass protruding from its red clay exterior. The logs, scuffed from hundreds of journeys through the mountain, squeezed their occupants cheek to jowl with no seatbelts. I would get a signal from the attendant to squeeze in with five strangers. As we took off, I’d hear the first echoes of “Zip-A-Dee-Doo-Dah” from faraway segments of the ride. The black air stretched promisingly in front of me. The same overwhelming tingle of elation and anticipation always crept over my scalp as I bounced along through the dark, with the musty reek of old water and delightfully clammy air whispering through my hair. Darkness gave way to brilliant bursts of colorful light, and the voices of the animatronic Br’er Rabbit and friends drowned out the quiet swish of water running underneath me. I knew how the ride worked, and I knew the “magic” was just well-timed lighting and sound, but that didn’t matter. Divorce was on the horizon for my parents, and I would soon be too old to ignore the weighty blows that life could deliver. But here, I could glide through scents and sensations without being reminded of what awaited me outside. I could just lose myself in the ride. In joyful surrender, alone among strangers, I always felt like crying and I never knew why.

At six o’clock every evening, slumped on a cement bench and waiting for our father, Skyler and I would savor the stickiness on our vanilla-scented fingers, and the musty water smell that had dried into our clothes. We were tired, hungry, and usually sunburned, but we couldn’t wait to return. By morning, the white-suited janitors and invisible night-time groundskeepers would have meticulously cleared the park of every trace of yesterday: no forgotten hats strewn across benches, no finger smudges on glass cases, no dirty footprints of the hundred-thousand people who had bustled in only hours before. Everything would be perfect again, and a new day could begin.

Genevieve Bouchard C’16 graduated in May.