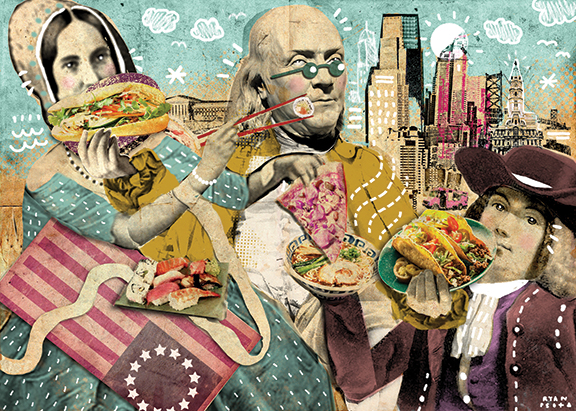 An elegy for Schmidt’s, Christian Association chili, strange yellow egg bagels, and the once and future hoagie.

By Daniel Akst | For years I’ve lived in New York’s Hudson Valley, the picturesque stomping grounds of Washington Irving. But it took a recent visit to Philadelphia before I could really understand Rip Van Winkle.

There I was, like so many alumni before me who return to campus after decades of absence, startled by all the changes and astonished by my adult offspring. Never did I imagine, back when I was stumbling toward a Penn degree in the 1970s, that I would marry my dentist in Los Angeles, that we would have twin boys, and that, after 18 years of shoveling chow into them as frantically as stokers once fed steam engines, I would someday enroll them at … Penn.

I marveled at the serried ranks of glossy biomedical structures that had sprouted along the University’s southern flank. The once-dicey area to the west of campus was now impossibly charming. Campus buildings, in my day untended, now rivaled Fort Knox for security. And The Daily Pennsylvanian, which nourished me with passionate colleagues, a sense of mission, and nightly infusions of free pizza, was down to four print issues a week.

It was food, in fact, that most pungently embodied all the changes I encountered. Where was the café of the Christian Association, in which sweating radicals labored over vats of vegetarian chili? What had become of La Terrasse, the French restaurant on Sansom Street, now that I could at last afford to eat there? Marigold Kitchen, in my day a homey sanctuary for special occasions involving girlfriends and parents, remains in business, but as a culinary temple that, like so much around Penn, has gone upscale.

One question was more urgent than all others: whatever happened to the hoagie? I used to relish one any time I had a few bucks to spare, but that culinary staple of my era, once as ubiquitous as Harris Tweed jackets and Fair Isle sweaters, now seemed to be missing in action—along with so many plebeian delights associated in memory with Philadelphia. I didn’t much miss the indigenous long pretzels, softer than those of my native New York, that came blanketed with mustard. But when had all this craft beer washed away tangy old Schmidt’s? My sons astonished me with the news that, after months on campus, they still hadn’t had a cheesesteak. And with something like relief (once I explained the stuff), they reported no scrapple in the dining halls, though I could swear it was served at breakfast back in the day, harrumph.

But of course, first impressions can be misleading. After a little more time in West Philadelphia, I discovered what nostalgia had occluded: the place is now a culinary wonderland. Hoagies haven’t disappeared, although in some places now the word is pronounced banh mi—and Genoa salami might be supplanted by tofu meatballs. Kidding aside, the pronunciation really has changed: in the Seventies the locals called it something like “heau-gie,” with a kind of “eww” in the first syllable entirely unwarranted by the lusciousness of those mighty sandwiches. “The ‘fronting’ of the vowel in hoagie reached a peak with those born in the 1950s,” the eminent Penn linguist William Labov tells me, “and has been moving in the reverse direction since.”

See the parallel? Just as the movement of peoples changes accents, it changes what we eat. Today in Penn’s neck of the woods you can find an amazing array of cuisines, including Indian, Mexican, Pakistani, Caribbean, and Korean. There’s a whole cluster of Ethiopian restaurants, to say nothing of hipster bars and cafes. There’s Japanese, Chinese, and soul food as well, and even a highly regarded microbrewery. Vegan offerings seem to abound, although I feel no eagerness to try anybody’s seitan pastrami. At Manakeesh Café, on the other hand, the namesake dish is a fragrant and delectable Middle Eastern version of pizza; we had one covered in lamb, for a price even a student could afford. If only they’d had these at the DP way back when!

Labov, who was born in 1927 and has done a lot of eating in Philadelphia, avers that the character of a place is captured best not by what people consume with a knife and fork, but what they eat out of their hands. Folks at Penn have their hands full of interesting comestibles nowadays, thanks to the proliferation of food trucks and stands. I honestly don’t remember many of those back in the Seventies (note to wisenheimers: yes, we had internal combustion engines in those days). Thankfully the enterprising proprietors of these rolling eateries are deaf to the cries of “cultural appropriation” that rise thick as Ivy on many campuses recently, because they freely mix culinary traditions in ways their customers seem to adore. This vortex of competition and invention may be forcing all parties to step up their game. My sons tell me that nowadays you can even get decent grub at Wawa, which I only remember as a surrealistically named source of junk food.

The food scene at Penn, in other words, has changed in keeping with a changing campus in a changing city—as it has always done. Believe it or not, Ben Franklin probably didn’t eat hoagies; the word was probably first uttered in the 1930s, according to hoagie scholar Howard Robboy, and only started popping up in Philadelphia phone books after World War II. There were long sandwiches before that of course, but the point is that the American diet, like America itself, is ever-evolving. Today’s vastly more cosmopolitan campus dining landscape reflects years of booming immigration, the much greater diversity of Penn students and staff, and the more sophisticated palate of Americans generally.

All of which is a useful reminder not to get too sentimental about what we used to eat. I certainly won’t miss the strange yellow egg bagels I found to be the only kind available when I got to Philadelphia, a city in which even many of my fellow Jews—some of whom called themselves Scha-pyro instead of Scha-peero—had never heard of a bialy. In my first trip to Chinatown with fellow students, around 1975, I remember that one or two had never had Chinese food before. And of course the Chinese food most of us knew back home was only the dimmest approximation of the real thing. Schmidt’s, by the way, was terrible.

Meanwhile, I am grateful for what continuities I find. Koch’s Deli, for instance, is still feeding Penn scholars (just as the Penn Book Center is still providing food for thought). And rest assured, the traditional hoagie lives on, bursting gloriously with meats and carbs and (heaven forbid) gluten. One of these days, when I’ve made my way through all the other delicious-sounding stuff on offer, I may even get one.

Daniel Akst C’78 is a journalist, novelist, and book critic.