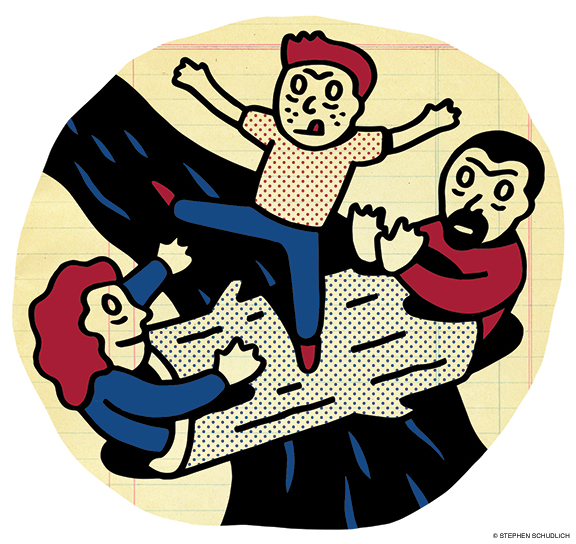 “I’m not saying that you can teach grit in some psychologically stupid, ham-fisted way,” Angela Duckworth Gr’06 says. “But I think there are things you can do to give kids intentionally designed, psychologically thoughtful experiences that would encourage grit.”

Duckworth, the Christopher H. Browne Distinguished Professor of Psychology and scientific director of the Penn-based Character Lab [“Character’s Content,” May|June 2012], has a new book out, Grit: The Power of Passion and Perseverance. Not surprisingly, the two qualities in the subtitle are the key ingredients for making grit, though she freely acknowledges that the definitive recipe is still in the test-kitchen phase. Written for a popular audience—it reached No. 2 on The New York Times bestseller list—the book features interviews with researchers and people whose individual grittiness illuminates some aspect of the trait, as well as recent discoveries in neuroscience, extensive survey results (with a Grit Scale questionnaire for readers to fill out), and the like.

In the book, she cites two influences. One was her father, a Chinese immigrant who frequently told her she was “no genius.” The other was Martin Seligman Gr’67—the Zellerbach Family Professor of Psychology who, as Duckworth’s graduate advisor during her second year in the doctoral program, told her bluntly that she hadn’t had a “good idea in two years,” and that she needed to come up with a theory of human achievement. Considering that Duckworth went on to win a MacArthur “genius grant” Fellowship and write a bestselling book about human achievement, it’s fair to say that both critiques spurred her on.

Since its publication, Grit has received some critical barbs as well as kudos, and she says she spent the beginning of her book tour memorizing Rudyard Kipling’s “If,” whose first stanza includes the lines: “If you can trust yourself when all men doubt you,/ But make allowance for their doubting, too …”

In some ways the hardest part of inculcating grit and resilience must be knowing where to draw the line. Most parents want their kids to become stronger and more resilient, but they don’t want the challenge to destroy them.

I’m not saying that we teach grit the way we teach kids to spell words, but I do think you can be intentional. I think it’s a skill. A Philadelphia Outward Bound instructor explained to me that it’s only because they’ve taken these kids out on these expeditions that they know how to push—when to say, ‘I’m gonna let this kid be lost for two hours”—but they wouldn’t let the kid [risk her life]. None of us wants to put our kids in real danger, although as a parent I have to say that I think our kids are a little more robust than we think they are.

On the nurturing side, that too is a skill—how to communicate to the kid that there is an unequivocal, unconditional support—but at the same time not swoop in and solve their problems. Like, how do you communicate to your kid that there’s nothing in the world that matters more, that you’ll give them all the attention that they need—but you are not driving back to pick up their 8th-grade history book? I’m actually not very good at it.

What is it about Outward Bound that interested you?

From a research standpoint, it is one of the programs that has the most robust evidence of actually having an effect on the long term. And I was thinking, “Damn—it’s a grit intervention.” We’re just beginning a study of Outward Bound, interviewing Outward Bound leaders, and we’re going to interview kids and try to figure out what happens in Outward Bound, and which kids do get grittier—and why.

Have you thought much about the value of initiation ceremonies?

I think it is not a coincidence that most cultures around the world have had a rite of passage, formalizing the transition from childhood to adulthood—bar mitzvahs, bat mitzvahs, and other cultures where kids have to go out into the woods and live by themselves for seven days, and come back with a deer or something. They’re always challenging—never easy things—and there is this kind of qualitative shift from one role into another.

I see a lot of wisdom in those things. If you think about it, what do we have in contemporary American society that’s like that? We really don’t, and maybe that’s one of the reasons why you have 24-year-olds walking around and they’re like 15-year-olds—they can’t butter their own toast.

How well do your recommendations—like optimistic self-talk, and updating your beliefs about intelligence and talent—work across socio-economic lines?

We haven’t actually done a study that looks at different socio-economic-status kids to ask that question. It’s a question I’m asked a lot, and I think it’s a really good question. But I don’t know the answer. If you look at Carol Dweck’s mind-set studies, one thing that is supported by the data is that there’s no socio-economic class that can’t benefit from these sorts of things. Often the most profound effects are on the most needy kids, interestingly.

Paul Tough’s latest book [Helping Children Succeed] was very much about how the environment and its intangibles—a kid feeling safe and so forth—are more important than any particular strategies like, “Oh, let’s teach kids how to set a goal.” [I agree that] kids always grow up better when they are safe, secure, know that they’re loved—but I don’t know that it’s at odds with teaching them stuff, and it’s certainly not enough for kids to have a safe, belonging environment.

How did you react to the criticism of your book?

Well, I discovered that I’m fairly thin-skinned. I definitely found it hard.

There’s different kinds of criticism. One was that the idea of character, and grit in particular, is—most generously speaking—tone deaf. That I had [ignored issues of] structural inequality, poverty, racism. And that was not at all my intent. I tried to say that obviously this is a book about what happens between the ears. It’s necessarily incomplete, but maybe that somehow seemed disingenuous to some people.

I would say this: I am somebody who defied her father to become a teacher working with low-income kids in the public schools in order to help them. I’m not myself poor, but I’m not blind to the problems. Psychologists are what they are—they’re not sociologists and they’re not policymakers. I felt like I was in some ways a bit of a lightning rod for things that were already in the conversation.

The other most-heard criticism was that the science was “thin.” People said, “Oh, there’s not enough data here.” I absolutely would love to have more data, but I wouldn’t have wanted to write a book on only the studies I’ve done, because that wouldn’t be enough for a whole book. But in the “Interest” chapter, I’ve interviewed and reviewed the research of the major experts on interest. And in the “Purpose” chapter, the major scholarly leaders in purpose. And for the “Practice” chapter, you know, I’m not like a journalist who’s just sort of read a couple of things; I’ve either co-published with these people or I’ve extensively studied and read and then talked to them and had them proof the final copies.

I’m trying not to become an asshole who’s just defending herself—like, “I’m right”—I’m trying to listen. The sociologists must have a point; otherwise they wouldn’t be saying something.

I spent like five or seven minutes—about the length of two Taylor Swift songs—being really happy that the book was doing well, and then I turned my attention to what I’m doing now, which is the Character Lab. We’re trying to advance the science and practice of character development, and there’s a million problems, some of them mundane, some of them political, some of them intellectual—like trying to solve behavior change, and trying to raise money from hedge-fund managers, and hire staff, and make sure the staff are happy and communicating well—so I’m totally and completely consumed with the next thing. And interestingly, that is exactly how the people that I studied are like.