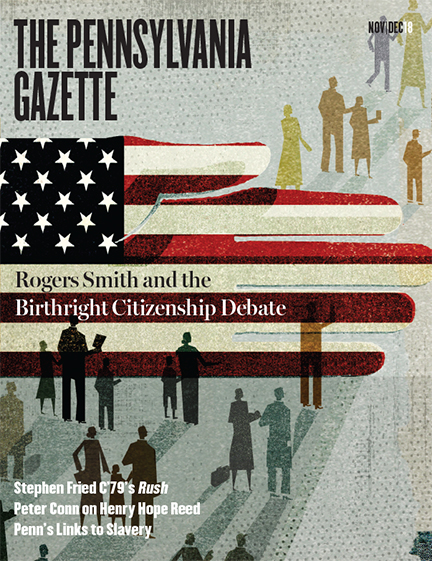 GOP nativists have taken aim at a fundamental principle defining the American republic: birthright citizenship. Their legal rationale has an unlikely source: a liberal professor who totally opposes their aims. And that’s just where things start to get interesting with Constitutional law scholar Rogers Smith.
By Trey Popp

Rush on the Mind

A focus on mental illness was a constant throughout the multi-faceted career of Founding Father and physician Benjamin Rush. In this excerpt from Stephen Fried C’79’s new biography, as his own death nears Rush distills a lifetime’s worth of experience and insights “to show that the mind and the body are moved by the same causes & Subject to the same laws.” Plus: An interview with the author.
By Stephen Fried

From the Editor | Matters of interpretation.

Letters | Praise, corrections, and a couple of arguments.

Notes from the Undergrad | Chasing Arabic.

Elsewhere | “That dynamic tension is what I sought.”

Expert Opinion | On not getting over it.

Heard on Campus | “Democracies don’t die like they used to.”

Teaching | Jeb Bush is a Presidential Professor of Practice for 2018–19.

Photography | Celebrating the “intrinsic beauty of the imperfect.”

Books | Writer-in-Residence Carmen Machado’s Her Body and Other Parties.

Music | A story of performance, friendship, and survival. Two Pianos.

Old Penn | After the Armistice.