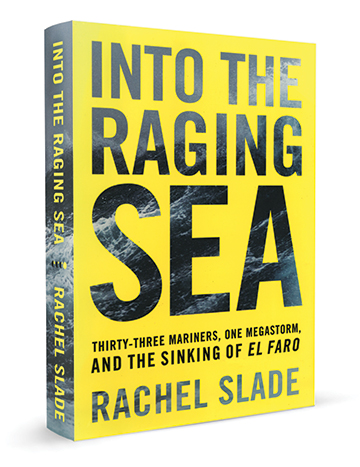 How a tragic combination of bad decision-making, poor information, and lax safety standards sealed the fate of a merchant ship and its crew.

Rachel Slade begins her powerful and gripping first book with an unobtrusive “note on the text.” We’re told that the words she will ascribe to the captain and crew of the American merchant ship El Faro before and while it sank on October 1, 2015, are exactly what was said, as recorded by six microphones embedded in the bridge’s ceiling. As the story develops, however, that brief note gains more and more heft. Initially, there was much uncertainty as to how the disaster occurred—one chapter of Into the Raging Sea is entitled “Ships Don’t Just Disappear”—and recovering the best evidence, the tape of those conversations, posed a massive challenge.

El Faro was an aging vessel that fell short of 21st century safety standards but still plied the seas thanks to the authorities’ grandfathering habit. For example, ships built since 1986 must carry enclosed, “submarine-like” lifeboats rather than the vulnerable open ones of yore. But pre-1986 ships are exempted from that requirement. Toward the end of the book, Slade weighs in on the perversity of such concessions: “Why should a ship’s age preclude it from safety equipment that’s standard on all other vessels? In fact, shouldn’t older ships be better equipped, since they’re more vulnerable?”

Over the years, too, El Faro’s on-board safety had been compromised in many ways, some of which led to the hazards that took her down, especially devastating leaks and cargo containers on the loose. Her captain, 53-year-old Michael Davidson, had shaky qualifications and the insecurity to go with them. He coped by displaying a hearty confidence in his decision-making until it was too late.

But none of these flaws would have scuppered El Faro if it hadn’t been for another, more egregious failure. From the moment Hurricane Joaquin became a force to reckon with east of the Bahamas until it was ripping his ship apart, Davidson didn’t know where the storm was.

He thought he did, though, thanks to a software program called Bon Voyage System. As El Faro steamed southeast from Jacksonville, Florida, toward its Puerto Rican destination, forecasts from the Weather Channel and the National Hurricane Center kept putting Joaquin directly in the vessel’s path. “BVS was the outlier,” Slade writes, the only source saying the storm would swing north before El Faro reached it. Several crew members were aware of the discrepancy but either didn’t bring it to Davidson’s attention or did so timidly. Putting all his trust in BVS, the captain stayed the fatal course.

What he didn’t know was that BVS had an innate tardiness. Its data lagged behind real time by several hours, and Davidson sometimes exacerbated the problem by not checking his computer. At 4:45 a.m. on the last day of his life, Slade writes, “Davidson downloaded the BVS report that had been waiting for him since eleven o’clock the night before. At that point, the forecast was more than fifteen hours older than the most recent NHC report; it was completely obsolete. The BVS forecast continued positioning Joaquin’s eye much further north, giving Davidson false reassurance that he’d successfully steamed below it.” Deep in the fine print of BVS’s instructions lay a mention of such delays, but Davidson seems never to have got that far in his reading, and no one else had brought the clause to his attention.

The ship’s plight was exacerbated by conditions at its parent company, TOTE, which had been reorganizing itself, letting employees go, and reassigning their duties to others who were expected to perform two jobs at once—all in what Slade believes was an effort to squeeze out higher profits. Most of Davidson’s mid-crisis attempts to consult with his onshore superiors ended with him being asked to leave a message at the tone. To read the exchanges between him and his underlings as they begin to comprehend what they’ve done to themselves—steamed into the heart of a monstrous hurricane—is both riveting and painful.

Once El Faro has gone down (workers at a nearby monitoring station heard a thud as the ship hit the sea floor), Slade turns to rescue efforts and the attempts to find the tape of those conversations on the bridge, the equivalent of an airplane’s black box. I’ll leave it to readers to discover on their own how the suspenseful hunt for that item turned out.

Slade comes down hard on US government agencies for sub-par performances—she calls it “an open secret in the meteorological community that the ECMWF [European Centre for Medium-Range Weather Forecasts] is consistently better than the NWS [National Weather Service]”—but places the blame where it belongs, with the cheese-paring White House and Congress. The situation has not improved under the current administration. In May of 2017, Slade reports, the budget cuts it proposed for the National Oceanic and Atmospheric Administration, the parent agency of both the NHC and NWS, included $5 million that, in the words of the budget’s blue book, would “slow the transition of advanced modeling research into operations for improved warnings and forecasts.”

The depth of Slade’s reporting is impressive (the book grew out of an article she wrote for Yankee magazine), her storytelling ability even more so. And she is able to put her material in context as necessary. In the world’s greatest democracy, she points out, there is one place where rule by fiat still obtains. “On a ship, the captain reigns supreme. The final word,” Slade writes. “That’s the one thing that hasn’t changed since Herman Melville wrote Moby-Dick in 1851.”