The Electoral Road to Autocracy 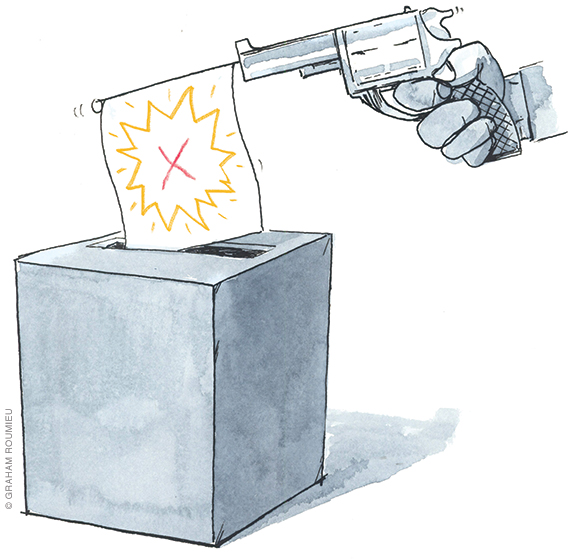 Democracies look different in the 21st century. So do their demises.

“Democracies used to die mainly at the hands of men with guns,” Steven Levitsky observed during a September visit to Perry World House. But nowadays, the Harvard government professor added, they’re likelier to die at the hands of democrats—or at least leaders who pose as them.

Not quite 30 years after the Cold War ended in what seemed like a decisive victory for liberal democracy, authoritarian rulers have seized the upper hand in places ranging from Eastern Europe to Latin America. Their paths to power have a striking commonality: they’ve depended not on battalions but ballot boxes. Consequently, citizens are slow to realize they’re becoming mere subjects. “In 2011—12 years into Hugo Chávez’s presidency in Venezuela,” Levitsky marveled, “a survey showed that the majority of Venezuelans thought that they were still living under a democracy.”

Levitsky is the coauthor, with Daniel Ziblatt, of the 2018 book How Democracies Die . As a guest of the Andrea Mitchell Center for the Study of Democracy, he focused on the vital role political parties can play to thwart—or abet—the rise of demagogues and strongmen.

“The US has had its share of extremist demagogues throughout the last century, from Henry Ford, to Huey Long, to Joe McCarthy, to George Wallace,” he noted. “None of those figures, though, made it anywhere close to the presidency—in large part, because the parties served as pretty effective gatekeepers.” But as the saying goes, past performance is no guarantee of future results.

Here is a brief excerpt of his remarks, which can be viewed in full at tinyurl.com/PennLevitsky.

During the Cold War, three out of every four democratic breakdowns took the form of a military coup. Today, most democracies, when they die, die in a more subtle way. They die at the hands not of generals but of elected presidents and prime ministers who use the very institution of democracy to subvert it. This is Russia under Putin, Venezuela under Chávez, Turkey under Erdoğan, Hungary under Orban, and many other contemporary cases as well.

What’s so dangerous about this electoral road to autocracy is that it often looks pretty benign. There are no tanks in the streets. You’ve got elections, the Congress, the Constitution, and many of the acts that are aimed at subverting democracy are dressed up as measures to, say, combat corruption, enhance security, or clean up the electoral process. As a result, many citizens are not fully aware of what’s happening until it’s too late …

One of the keys of protecting democracy today lies in keeping would-be authoritarians from getting elected in the first place. Here political parties play an important role—parties that are democracy’s gatekeepers. Elected authoritarians very rarely come to power on their own. Almost invariably, somebody from the political establishment opens the door for them. This is usually based, or often based, on a tragic miscalculation: a party, or a set of parties, calculates that an alliance with an extremist, would-be authoritarian could be politically useful—it can help win an election, can help to defeat some hated ideological rival. But the bargain very often backfires.

In Italy in the 1920s, liberal leader Giovanni Giolitti, seeking to tap into Mussolini’s mass appeal, included the Fascist party on his coalition’s list for parliamentary elections. The move legitimized Mussolini and facilitated his rise to power. In Germany, conservative party leaders worked with the Nazis in the late 1920s, again hoping to tap into Hitler’s grassroots appeal. In 1933, when conservative party leader Franz Von Papen was trying to calm down his conservative allies who were worried about Hitler’s appointment as chancellor, he told them, “Don’t worry, within two months, we will have pushed him so far into a corner that he will squeal.” In both these cases— in Italy, in Germany—mainstream politicians opened the door for extremists, and both cases turned out to be tragic miscalculations …

The late Spanish political scientist Juan Linz spent a good part of his career studying how and why democracies die. One of the lessons that he drew was that when a would-be authoritarian emerges on the scene, it is essential that mainstream parties do everything possible to keep them away from power. That means not only not aligning with would-be authoritarians but being willing to join forces with ideological rivals in order to defeat them.