Deaf with a Capital ‘D’ 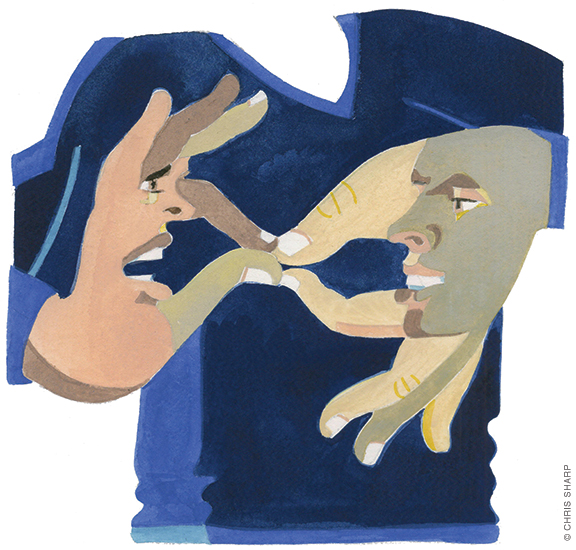 Signing off after a resounding career of teaching Deaf studies.

Sheryl Cooper C’79 has been fingerspelling since she was three years old, even though she isn’t deaf. Her father, who ran the family business—a Baltimore “tooth factory” that manufactured dentures—had learned the manual alphabet to better communicate with his deaf employees.

“He thought it would be cute to teach me how to fingerspell,” she recalls. Little did he know that it would shape her life’s trajectory.

Almost six decades later, Cooper is retiring as the coordinator of Towson University’s Deaf Studies Program, which she helped establish in 2000. Throughout the years, she and her colleagues have graduated 800 students; and Cooper has interpreted during the births of at least 10 babies, served as an expert witness for legal cases, acted as a consultant for school curricula, trained state agencies in Deaf-awareness, and interpreted for the likes of Bill Clinton, actress Fran Drescher, and Mary Travers of Peter, Paul and Mary.

But the story actually begins with her grandfather. In the 1940s, Grandpa Cooper hired a deaf man to work at his dental lab simply because “he was somebody who could do the job,” she says. “It did not require talking or hearing. It required good manual dexterity and good eye-hand coordination.” Soon, her grandfather added more deaf employees, and eventually the business became a training site for the State of Maryland’s Division of Vocational Rehabilitation.

While she was growing up, Cooper saw the deaf employees signing at summer crab feasts and winter holiday parties, and she longed to communicate with them in a deeper way. She already had English, French, Spanish, and Hebrew under her belt; now she wanted to learn sign language too.

At Penn, she was in the first cohort of 10 undergrads accepted into the Annenberg School’s communications major. Back then the University didn’t offer any sign language courses, though in 2012 it added a Deaf Studies Program and is currently the only Ivy League school to offer an American Sign Language and Deaf Studies minor. So she signed up for a series of classes at the Community College of Philadelphia and decided she wanted to work with deaf people as her career.

Cooper was hired by Towson as an instructor in 1988 and would later receive her PhD in educational administration and supervision from Gallaudet University, a private university with a large population of deaf and hard-of-hearing students.

Upon her arrival at Towson, she discovered that none of the instructors in the Department of Communication Sciences and Disorders (as it was called then) were deaf.

“My goals were to develop a formalized program that would include deaf instructors, change the Signed English classes to American Sign Language, expand the course offerings into a degree program, and update the name of the department,” she explains.

It didn’t happen overnight, but now, four out of five faculty members are deaf (Cooper being the exception), and one is both deaf and blind. “They serve as role models for the students,” she says.

“A lot of students enter the program self-identifying as ‘hearing impaired’ but graduate as Deaf with a capital ‘D,’” Cooper explains, referring to the distinct linguistic and cultural community of deaf people who use American Sign Language (ASL). “Obviously their audiogram hasn’t changed, but their identity has changed from being hearing impaired—being broken, being somebody who is ‘less-than’—to being proud of their status as a Deaf person.”

That sense of pride is reflected in the new name of the department.

“My deaf faculty were very adamant that they were uncomfortable being in the Department of Communication Sciences and Disorders,” she explains, “because we weren’t a science and we weren’t a disorder.” Although the new name is a mouthful—the Department of Audiology, Speech-Language Pathology, and Deaf Studies—she points out that it’s “accurate and not demeaning or insulting to anybody.”

Phasing out Signed English classes was imperative, too. As Cooper explains, Signed English was invented in the 1960s to make English “visible,” so that teachers of deaf children could teach English. But ASL is the native language of deaf people. While ASL is conceptual, spatial, and nonlinear, English (and thus Signed English) is very, very linear: you have to listen to every word in the sentence to the end before you find out what the speaker is talking about.

ASL, on the other hand, is concerned with concepts, not words, and it has its own grammar and syntax. “If I was trying to sign ‘the bear climbed up the opposite side of the tree,’ for instance, I would sign ‘tree’ with one hand and ‘bear’ with the opposite hand, then take my right hand [the bear] and climb it up my left hand [the tree]. So it would be ‘tree bear climb.’”

Which is why so many deaf people have trouble learning English, because English is essentially their second language, Cooper notes. “When I came to Towson and saw that they were only teaching Signed English, I thought, ‘That has such limited applications. Let’s teach the language that is really used out in the Deaf community.’”

Over the years, Cooper has added a number of extracurricular opportunities to the Deaf Studies Program. One is a language lab, where students practice signing face-to-face and through technology. Another is a chance to get away, either for a semester on Gallaudet’s campus or for a month in Europe, learning Italian Sign Language and Deaf culture at Siena College of Liberal Arts. Students also volunteer in the Deaf community as part of a service-learning class and internship at one of 60 sites. In the fall, the school hosts a job fair with dozens of organizations. An ASL Club also brings speakers to campus and takes field trips to events at Gallaudet.

One of the tasks Cooper has enjoyed most is connecting students with jobs. A strong alumni network allows alumni to share job announcements, Deaf events, conferences, and more. One of Cooper’s final projects before retirement was to create videos of alumni with different careers—of which there are many, and which impact the lives of deaf people across Maryland and the nation.

Cooper will continue assisting and advocating for deaf people in the next phase of her life.