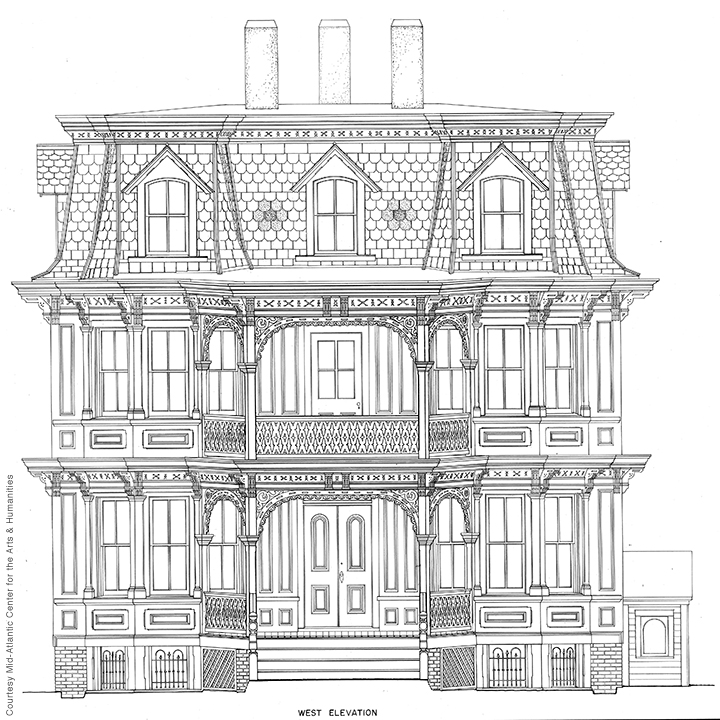 An exhibition recalls how a team of mostly Penn architects helped save Cape May’s architectural treasures in the 1970s.

On any given summer weekend and well into the holiday season, visitors crowd Cape May, New Jersey, to gawk at its streets of Victorian homes, festooned with inviting porches and beckoning turrets and elaborately painted in five, six, seven colors. It’s a far cry from what architect Perry Benson GAr’73 saw when he first arrived in town shortly after graduating from Penn. “At the time, everything was pretty much painted white,” he recalls. “The residents weren’t necessarily appreciative of its historic fabric and hadn’t yet realized the potential of what they had there.”

Benson’s introduction to the historic town came after he was recruited by Carolyn Pitts GFA’49 to join a team of architects, mostly Penn students or alumni, who spent months meticulously crafting pen and ink drawings of dozens of the city’s 600 frame buildings representing different styles of Victorian architecture—Queen Anne, Gothic Revival, stick-style, some 50 in all. As they climbed up and down fire ladders and braved all kinds of inclement weather, their goal was to produce down-to-the-inch scale documents for the historical record.

The laborious job unfolded over several years, with some architects returning in 1974 and again in 1977. Benson recalls that it took several days for a team of three—one clutching a pencil, two holding either end of the measuring tape—just to get the lay of the land for each building plan and/or facade.

In his drawing of a west elevation of the George Hildreth Cottage on Jackson Street, built in the Second Empire style in 1882, Benson neatly captured the home’s distinctive two-story porches and the tracery millwork that adorns them. Today, the house is painted in a—relatively restrained—palette of azure, grey, green, and plum.

That drawing and 28 others by a total of eight architects (seven from Penn), were displayed last summer in “Capturing Cape May’s Architecture: The Making of a National Historic Landmark” in an exhibition at the Emlen Physick House—a mansion built in 1879 and now a house museum, and itself a creme-de-la-creme example of high Victoriana whose design is attributed to noted Philadelphia architect Frank Furness.

In an elevation of the Physick House included in the show, Hugh J. McCauley GAr’72 carefully depicted elements of its bold facade, such as projecting bays, gabled roofs, and wide-topped chimneys. Daniel McCoubrey GAr’81 allowed his precise pen to linger on the onion-shaped cupola of the Moorish-inspired Cape Island Presbyterian Church in a view of that 1853 structure, now home to a theater company. 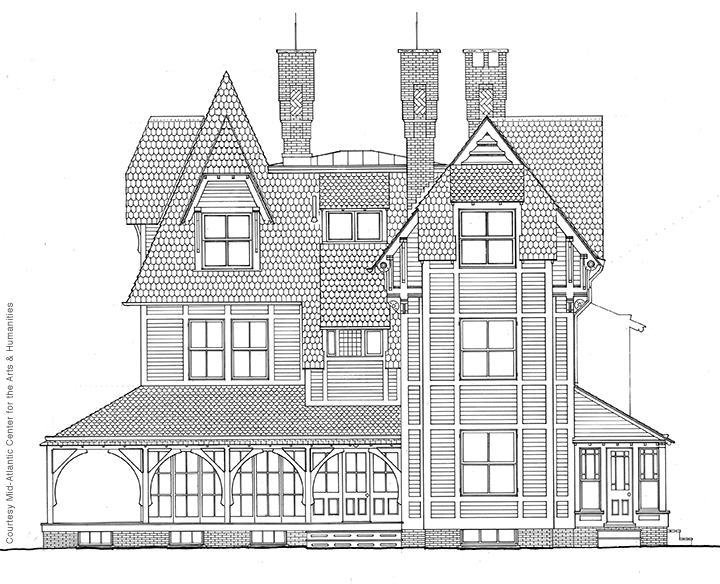 “More than just documentation, these drawings are art,” says Karen Fox, the local journalist and author who curated the show. “I felt it was important to show them all together.”

The exhibition presented digital reproductions of the 2- by 3-foot drawings, mostly elevations along with a handful of plans. Also included were photos of all 29 of the buildings studied by the team, showing them as they were at the time and as they appear today.

Situated at the southernmost tip of New Jersey’s Atlantic shore, Cape May was built as a resort for Philadelphia’s 19th-century elite. But by the middle of the 20th century, the town had lost much of its lustre, languishing as visitors flocked to new, more modern developments. A small preservation effort had just begun to gain traction—this was in the early days of urban renewal efforts—when a fierce nor’easter in March 1962 left many mansions boarded up and in danger of being razed. That set off a decade-long preserve vs. demolish debate in the town.

Pitts, who had been coming to Cape May since the 1950s, and others on the preservation-minded side began advocating for formal documentation of buildings that remained. Eventually she was charged with conducting an Historic American Buildings Survey (administered by the National Park Service) and invited Benson and several other recent Penn architecture grads to help. In a nod to the ornate frills and furbelows typical of Cape May’s residential architecture, the team jokingly referred to its efforts as “Operation Gingerbread.” 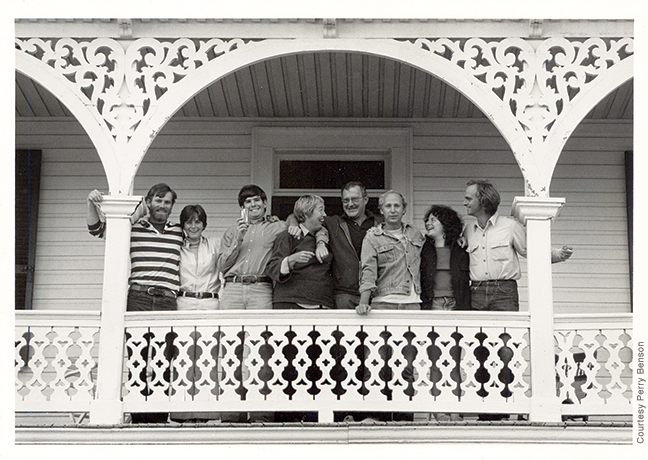 “This was all new to us,” Benson recalls. “This was before any formal historic preservation courses or program at Penn. We were all trained as modernists.”

Benson had a family connection of sorts to the project in that one of the homes he wound up drawing had been built for his great-great grandfather, William Weightman (1813–1904), a chemical manufacturer for whom Penn’s Weightman Hall is named. Weightman earned the nickname “Quinine King” for his success in mass-producing and marketing the drug during the Civil War.

Researching an article on the history of the house for a local magazine, Fox reached out to Benson—and soon saw the possibilities for an exhibition. “I learned that he had kept everything,” Fox says with a laugh. “He’s basically an archivist, plus he kept wonderful notes on what they ate, what the weather was like, and I got more and more interested in the drawings and who did them and their experiences those years.”

Benson was so excited to participate that he even shared the prosaic tools of his trade—protractors, rulers, pencils, and trace paper—that were given pride of place in a vitrine placed at the entry to the exhibition.

Also on hand was a copy of The Cape May Handbook, published by the Athenaeum of Philadelphia in 1977, which came out of Operation Gingerbread’s documentation. (If you look hard enough, you can still find copies today.) Though in desperate need of updating, the Handbook is still a good starting point for understanding the architectural styles found in Cape May. Research from the project also found its way into archictural historian George E. Thomas Gr’75’s opus, Cape May: Queen of the Seaside Resorts.

But Operation Gingerbread’s most significant legacy came in 1976 when Pitts, by then working for the Park Service as an architectural historian, saw her nomination accepted for the entire town of Cape May to be designated as a National Historic Landmark. She continued at NPS for 30 years—leading efforts to landmark many notable structures, including Frank Lloyd Wright’s Fallingwater and the Empire State Building—and died in 2008.

For Benson, the experience had a smaller but no less memorable effect. “My career took me all over the map in terms of what kinds of buildings I worked on,” he says. “But I kept with me that sense of the historic no matter what.” As he recalls spending several days to draw each plan or elevation in pencil, then longer—as much as a week for bigger buildings like the Chalfonte hotel—to produce a final drawing in ink, he adds: “It was pretty good fun and certainly unique. But probably the biggest impact is that I still draw by hand!”