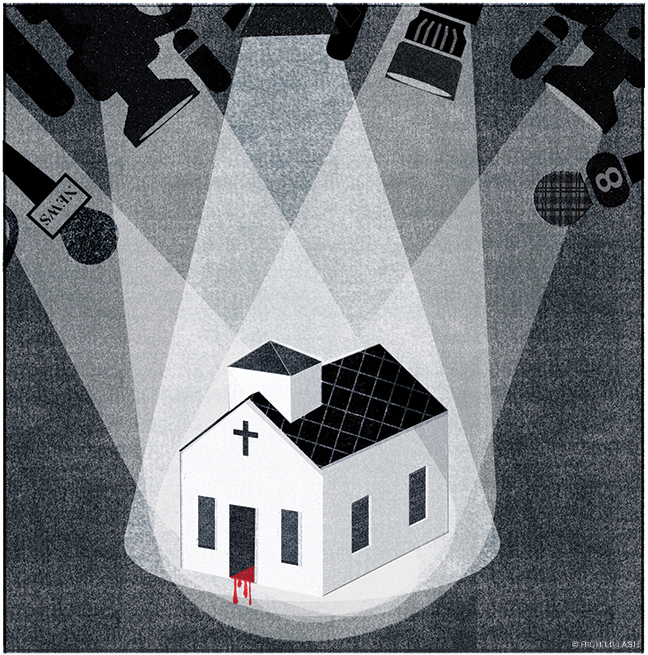 Covering the Sutherland Springs mass shooting three months after Houston’s deadly flood underscored the power of a purpose-driven press—and the hollowness of a gawking one.

I could almost feel my stomach knotting as I heard the news that early November Sunday: 26 dead in a small south Texas church. The worst mass shooting in the history of the Lone Star State.

At the Houston Chronicle, we mobilized immediately. One of our Austin-based reporters headed to the tiny town of Sutherland Springs, as did a photographer in Houston. I followed the next day—along with what seemed like every other journalist in Texas. There were reporters from every major nearby news outlet, along with correspondents from all the national networks.

TV news trucks lined Route 87, completely overwhelming the small town, which featured a couple of gas stations, a Dollar General, three blocks of housing, and not much else.

Residents had turned a patch of ground near the First Baptist Church—the site of the shooting—into a makeshift memorial, piled high with bouquets and notes to their murdered relatives and friends. I watched a slow trickle of grieving neighbors and relatives walk across the brown grass. Moments after they dropped their flowers, reporters surrounded them, hoping for an interview or a quote.

Most were extraordinarily gracious, even though it was probably the last thing they wanted to deal with: A barrage of questions as they tried to cope with the worst tragedy their town had ever experienced.

For me, it again raised the tensions I—and no doubt most of my colleagues—feel every time we have to cover a tragedy: the competing needs of tracking down the necessary information for the story we tell, versus the worry we might be pushing too far, potentially adding grief or injury during the worst moments of our subjects’ lives.

I couldn’t help but wonder what we were really contributing. And was this really the best way to do things?

The shooting was obviously news. It was the worst in modern Texas history. In the immediate chaos afterward, reporters debunked claims from local law enforcement that the shooter, Devin Kelley, wasn’t connected to the church. (His estranged wife and her family attended.) In their interviews with neighbors, reporters discovered the heroics of a neighbor who finally ended the massacre by shooting the gunman.

Every news outlet that could mobilize seemed to be following the same grim routine: Report the basic news. Write a story about the shooter, and anything that could explain some sort of cause or motivation for executing the unthinkable. Identify the victims. Cover the funeral. Move on to the next big tragedy. The traumatized survivors had been snared by the spotlight with blinding speed; they vanished in the media’s rear view mirror almost as quickly.

The rote, rushed process felt even more exacerbated by the reality of newsgathering in an era when instant content is king, with newsrooms screaming for every video, photo, and story as soon as it’s available—anything to capture the ever-shrinking attention span of the American news consumer.

I couldn’t help but think of another tragedy I’d helped cover earlier this year, when Houston wrestled with Hurricane Harvey, which swamped the city with massive floodwaters and killed 80 people along the Gulf Coast.

In the crush of the storm, reporters from across the state and nation descended on Houston, fanning across the city, interviewing victims and law enforcement, struggling to stay on top of the breaking news. The flooding and the rescues made for must-watch TV, but reporters also provided a measurable service. They warned residents about flooded areas, pointed first responders to trapped victims, provided rolling updates of where the storm was heading and how it was affecting the city and its people.

The city’s vastness diluted the media’s presence in a way that was impossible in Sutherland Springs, yet even in Houston residents raged at reporters—at times on live TV—accusing them of caring less about their subjects than in getting a soundbite and moving on.

“People are really breaking down, and y’all sitting here with cameras and microphones trying to ask us what the fuck is wrong with us,” one woman yelled at a CNN reporter. “With me shivering cold, with my kids wet, and you still putting the microphone in my face!”

Two weeks after the storm hit, most outside reporters had left. But because we’re the hometown paper, we had to remain focused on Houston’s recovery—and on how city and state leaders had ignored warning signs, leaving the city vulnerable to a storm like Harvey. We reported stories like why the fire department hadn’t had the equipment it needed to respond to the storm effectively. Now, we’re focusing on what the city and state are going to do to make sure it doesn’t happen again.

Those stories seem more valuable, in the long term, than the shock-and-awe of the first few hours or days after a tragedy. In the best-case scenario, they produce revelations that can help change things.

During Hurricane Harvey, media scrutiny reinvigorated a local conversation about flood control, planning, taxation, and everything in between. The city has already started buying out some homes that have flooded repeatedly in years past. With any luck, city leaders will find the political will to make decisions that—even if unpopular in the short term—will protect Houston in the long term.

I wish I could be as sanguine about Sutherland Springs, but Americans seem to have long since grown inured to stories about mass casualties. It strikes me that we in the press are going to have to find a better way to tell such stories if anything is ever going to change.

Days after the shooting, a man in California went on a rampage. He killed his wife, then shot 14 others, four of whom also died.

Across America, reporters swung into action once again.

St. John Barned-Smith C’08 is a reporter at the Houston Chronicle.