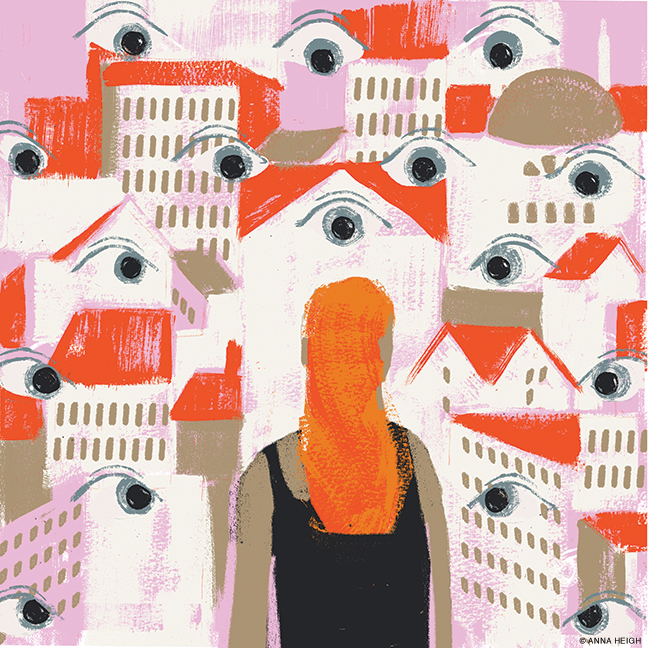 In the early years of my life in Istanbul, Turkish women always asked me what I thought of Turkish men.“So are the men attacking you on the street?” they said, smiling. “No, of course not. They’re all very kind,” I replied. “But they must stare,” they insisted. “No more in Istanbul than any man stares at any woman in any other city,” I said, and we continued our dance. I wondered if they were asking because I was a woman, or because I was from the US, where, in some fantasy, all women were free, and all men were well behaved.

In his book Istanbul, Orhan Pamuk quotes a newspaper column from 1974 that advised its readers, “When you see a beautiful woman in the street, don’t look at her hatefully as if you’re about to kill her and don’t exhibit excessive longing either; just give her a little smile, avert your eyes, and walk on.” In The Black Book, Pamuk refers to these stares as “scowls.” Shortly after I moved here, I decided the scowls were a test: I am looking at you, will you treat me like a human being? If I smiled at them, the men would relax, smile back, and respectfully look away. I detected something ugly in Turkish women’s voices when they talked about men on the street—these weren’t just men, but men from the East, members of the underclass. I reasoned that since the women were snobs, they couldn’t be right.

My second year in Turkey, I moved to Cihangir, the neighborhood of Pamuk and my friend Caner. The cobblestone streets were lined with broad-leafed trees; elegant four-story buildings, some 19th-century, others mid-20th, had all been painted in yellow and pink pastels. A tiny green mosque doubled as a teahouse and chairs and tables spilled out into the main square, where people sat all day and night. Cats draped their slinky bodies across motorcycle seats, in windowsills, atop coffee bars; seemingly every corner or doorway had been christened with water bowls or bits of cat food; and in spring, it seemed as if you couldn’t walk for stepping on kittens. Everywhere crumbling stairs descended down narrow, romantic passageways. The lucky tenants, those with apartments hanging from the hill, had the View, the Cihangir View, which spanned the Golden Horn, Asia, the Sea of Marmara as it meets the Bosphorus Strait, and even the Prince’s Islands in the distance. In Cihangir everything was graceful, a troupe of ballerinas reincarnated as a city neighborhood.

And it was a real neighborhood, the way Jane Jacobs intended, the way of the Ottoman mahalleler of a hundred years ago, everyone functioning as an integral part of keeping the organism alive: feed, love, protect. I wanted to contribute to it. Every day, I took care to greet the pastry shop men, to wave at the grumpy car park attendants, to shop at the vegetable stand rather than the supermarket, sometimes buying tomatoes twice as if paying some sort of Cihangir Tax. The vegetable man smiled at me in a gentlemanly way, no matter whether he liked me or not.

Cihangir wasn’t always so enchanting. In the 1950s, its mostly Greek inhabitants were chased out by Turkish mobs, their shop windows smashed; even this most cosmopolitan of old Istanbul neighborhoods saw the whitewash of Turkish nationalism. When the Greeks, Armenians and Jews fled, rents plummeted and prostitutes planted roots in the gorgeous old buildings. Cihangir became a place you just didn’t go to. I had friends whose mothers still forbade them from living in Cihangir, even as it is now, studded with wide-glass storefronts selling Ikea-inspired lamps. Cihangir must have been really bad if, even wearing the conspicuous jewelry of global gentrification, it still scared Turkish moms. Cihangir, named for an Ottoman prince, had been reduced to a lady of ill repute. In Turkey, honor is more important than a good view of the Bosphorus.

The lessons of Istanbul often had to do with honor, but I had always missed that during my conversations with Turkish women about Turkish men. Then one night, for the first time in over a year, I gave in to my lazy New York ways and ordered in some food. (Okay, it wasn’t food, it was two beers and a pack of cigarettes.) Two delivery boys arrived. They didn’t have change for my 50 lira bill, so I had to fish coins out of a bowl to pay them, and sheepishly I invited them in while they waited. One respectfully cast his eyes to the floor. The other grinned broadly, amused to be inside a foreign girl’s home. In my mind, I was being neighborly; I almost offered them tea. I also felt stupid dumping all those coins in their hands, and so I overcompensated, the way insecure foreigners do: “Please come back if I miscounted the change.” Now I know—because my Turkish is better and I know how difficult that sentence actually is—that probably the only thing they understood was “please come back.”

Two minutes after they’d left, the grinning delivery boy returned, claiming I had indeed left them a few coins short. I turned my back to him again to get his money. I had already acquired a kind of guilt being a foreigner in Turkey, as if all I did was cause Turks trouble. I am not sure where this came from. But as I was feeling ridiculous, the grinning boy came inside, shut the door behind him and with one swift motion, pushed himself against me and grabbed my ass.

I pulled away and he began to come towards me again until I ran towards the open window and screamed at him, “I will scream!”

He looked at me, more surprised than I was, and left.

I called my friend Rana, who was out to dinner. She rushed over in minutes. I noticed she was cracking her knuckles like some thug ready for a fight, and laughing.

“No, what, are you kidding?” she laughed. “We don’t go to the police station. We’re going to tell the neighborhood. And they will beat him.”

First, we talked to the guys at the bakkal, or deli, in my building. Then, the electricity store on the corner. Then the bakkal where the delivery boy had worked. Each time, the men seemed angry about the delivery boy, and perhaps even more intimidated by Rana’s declaration, “I am a lawyer.” As Rana had predicted, each guy we informed of the event immediately declared, hands shaking, that he would find the kid and break his face.

“I swear, I will beat him,” one promised her.

“He will never be allowed in the neighborhood again,” said another.

“OK,” said Rana after an hour or so of this extraordinary acquisition of pledges to violence. “So now you have three men who will beat him. That should be enough.”

“For what? Enough for what?”

“So that he never does it again.”

I had been robbed in Philadelphia and worse in New York. I would, in the years to come, go through far fewer moments of harassment, ass-grabbing, and home-following in Istanbul than I ever did in America. The neighborhood was indeed watching. But the particularly Turkish remedy of neighborhood justice unnerved me. “Why didn’t you just call the police?” said one good-liberal, American male friend. “You just let these guys beat this kid up?” Yet when I told my friend who had grown up in India, he said: “Yeah. Sounds like the boy needs a slap.”

The Turkish police, notoriously corrupt and violent themselves, had long ago faded from society as a proper regulating force, but neighborhood justice seemed to be more than mere punishment. This delivery boy had not only denigrated my honor, but the whole neighborhood’s—perhaps all of Turkey’s—and so it was up to ordinary Turks to win it back. They would beat him not only because he was dangerous, but also because he didn’t know his place.

It was clear to me, as my neighbors listened to my story, that I hadn’t known my place either. “These animals!” said a Turkish friend. “But why did you even open the door all the way? What were you thinking?” Caner shook his head. “I am telling you, you are too friendly, you smile too much. You cannot be this open.” I had confused this young man with my friendliness. My self-conscious American class sensitivity had upset the order of things. And yet it was this kid who would be set straight, not me. When we told the owner of the deli where the kid worked about what happened, he said, “I am so sorry.” Then he turned to Rana with shining eyes, looking as though he might dissolve from shame. “Sister, she is foreign, but I know her. She is a neighborhood girl.”

Turks couldn’t do anything about foreigners moving to their city. They couldn’t do anything about the mysterious country folks moving there either. Instead, they exerted control over that which remained manageable—the spaces between classes and sexes. My friends’ point was: While this class snobbery may offend your Western sensibilities, you, foreigner, are perhaps better off playing by the rules of this country, instead of your own . If I was going to live in Turkey, I had to learn to think like a Turk. These were not my rules to break.