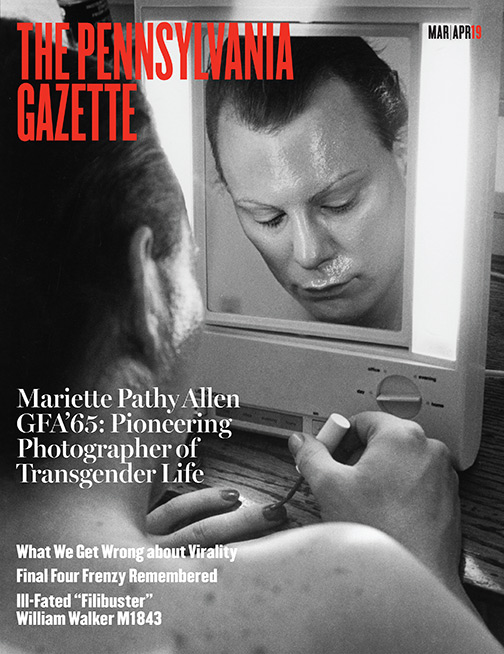 Since the 1980s, Mariette Pathy Allen GFA’65 has focused her camera on gender identity and expressions of gender. Some consider her the unofficial photographer of transgender life. But finding her place in the fine art world has been another story. By Molly Petrilla

The Annenberg School’s Damon Centola thinks the contemporary wisdom about how behavior spreads is missing something fundamental—and that may be why mindless trivialities crowd out civic engagement. Can anything be done? He has an idea or two. By Trey Popp

Celebrating the University’s most storied sports team on its 40-year anniversary. By Dave Zeitlin

Newly settled in Costa Rica, a recent alumnus investigates the legacy of “filibuster” William Walker M1843—largely forgotten in the US but still perhaps the most hated man in Central America. By Myles Karp

Letters | Thank-you notes, and other kinds.

Notes from the Undergrad | Hungry for contentment.

Alumni Voices | “The death is off for now.”

Exhibition | Wisdom of the crowd at ARG’s Citizen Salon.

Interview | Alan Sepinwall C’96 on his book, The Sopranos Sessions.

Andrea Kremer C’80 was honored by the Pro Football Hall of Fame.