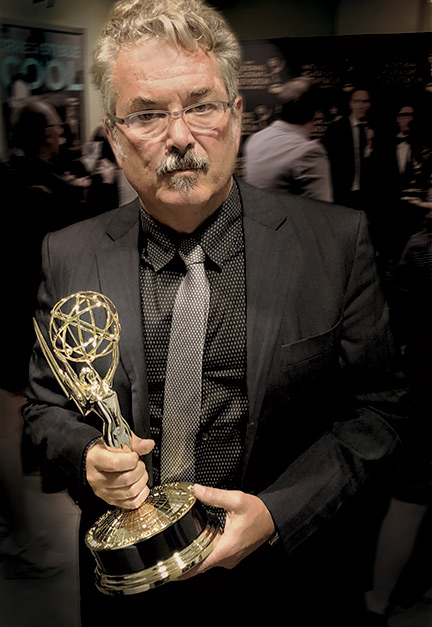 How a film editor shaped the story of the Charlottesville riot—overnight.

It was supposed to be a routine Sunday edit for a three- to five-minute segment to run on Monday’s Vice News Tonight. But when John Chimples C’80 started screening the footage from Charlottesville, Virginia, and got to the “infamous ‘tiki torch’ march,” he thought, “Holy shit, what is this?”

Chimples and a team of fellow editors would end up crafting 30-40 hours of material on the fly into a gripping, disturbing narrative about the ill-fated “Unite the Right” rally. The white supremacist riot in August 2017 left one counter-demonstrator, Heather Heyer, dead and dozens of others injured when neo-Nazi James Alex Fields crashed his car into a crowd after authorities had shut down the event.

Mixing video shot by Vice film crews, surveillance cameras, and interviews by correspondent Elle Reeve, both on the streets of Charlottesville and in the gun-filled hotel room of Christopher Cantwell (aka “the crying Nazi”), who had fled the area in a van after pepper-spraying opponents, the eventual piece, titled “Chartlottesville: Race and Terror,” took up the show’s entire broadcast time on HBO. It later won a Peabody and two editing-specific awards for Chimples and three colleagues: the American Cinema Editors “Eddie” and an Emmy for News and Documentary: Outstanding Editing. The video has been viewed more than 3.5 million times on YouTube.

For Chimples, it’s just the latest twist in a career trajectory he laughingly compares to the movie character Zelig, always popping up in different, unexpected places.

After graduating Penn with a major in art history, he moved to New York to pursue photography. He shared a loft near the legendary CBGB music club, and a number of post-punk bands—“including, on occasion, Sonic Youth,” he says—used the space for rehearsals. He ended up being employed by a company that staged multimedia presentations for corporate and theatrical events. “I got to work as a slide programmer and projectionist on the Radio City Music Hall Christmas Spectacular and several on- and off-Broadway shows,” he says. Later he contributed images and operated projectors for the Talking Heads’ music video of “Burning Down the House” and concert film Stop Making Sense.

Chimples still mourns the passing of the “beautiful panoramic slides” and intricately timed projectors that were displaced by video displays—initially pretty crude—by the end of the 1980s. Those presentations “were really immersive, and it just had a great organic feeling,” he recalls. “It was just a real experience.”

For most of the next 15 years, he was involved in making commercials and corporate films, specializing in a genre known as “docu-dustrials,” which involved traveling around shooting unscripted scenes with companies’ customers and others. Along the way, he says, he taught himself film editing and that became his main professional outlet.

Through a Penn connection, Karen Thorson C’82, he was assigned to edit several episodes of David Simon’s venerated HBO series The Wire in the mid-2000s. He and Thorson went on to work together on the main title sequences for Treme, Simon’s series set in New Orleans, during its four-season run on HBO (and to get married in 2006). Chimples also did the editing for musical performances taken from the show that were made available as iTunes downloads. Other gigs included episodes of The American Experience on PBS, various TV shows, and what he calls “minor films.”

He started working at Vice Media in 2015, which “was just a dream come true for me,” he says. “It’s a weird kind of place, certainly for a scripted narrative editor … but I had always been interested in news. I was a news junkie, kind of, even at Penn.”

Back then, he says, he’d often catch the network news broadcasts by anchormen Frank Reynolds and Peter Jennings and follow that up with the MacNeil/Lehrer Report (now PBS NewsHour). He briefly considered a career in journalism and even traveled to Grenada—where memories of the 1983 US invasion were still fresh—for a “really left-wing photo agency called Impact Visuals out of Chicago,” he says. “I found myself in some sketchy situations, and I just sort of decided my personality was a little too big to be a fly-on-the-wall photojournalist.”

And yes, he’s aware those references date him. “I’m twice as old as everybody I work with,” he says. “The head of the whole news division is 45.” (That would be Vice EVP News Josh Tyrangiel C’94, who actually turned 46 in September.)

But Chimples feels very much in tune with the approach at Vice, which emphasizes “fully immersive,” “character-driven” storytelling, he says. “It’s definitely geared toward a younger audience, but especially left-leaning people my age watch it all the time.”

Initially he worked on a weekly show, Vice on HBO, loosely modeled on 60 Minutes, where his first piece focused on “the Saudis using US cluster bombs in the war in Yemen.” After a couple of years, he transitioned to Vice News Tonight, which he describes as “a reimagination of a nightly news show made up of three- to eight-minute mini-documentaries.” Tyrangiel, formerly a top editor at Time and Bloomberg, had come to HBO “to kickstart the nightly news show,” says Chimples, who hadn’t known him before that.

On Sunday, August 13, 2017, Chimples arrived at Vice’s Williamsburg, Brooklyn, offices at 1 p.m., consulted with the producer on the Charlottesville story, and settled in at his editing bay. A few hours later, Tyrangiel “came in and asked how the footage was,” Chimples recalls. “I said it was insane and showed him a couple minutes of the march. It was pretty clear how important it was—and that Vice was the only organization covering it in depth.”

Chimples kept working through the footage, with Tyrangiel returning a few more times to check in. At about 10 p.m., “Josh came back and said HBO was giving the story the full half hour of the next evening’s show,” he recalls. “I looked at him and said, ‘So I’m here all night,’ and he said, ‘Yes,’ and that another editor would pick up the edit in the morning.”

By 2 a.m., Chimples had reviewed the footage that had been sent back to Vice, “and I began to cut the piece for real,” beginning with the torch-lit march Friday night on the University of Virginia campus and working toward the aftermath of Heyer’s murder on Saturday. By 10 a.m., when he handed off the piece, “I ended up with six to eight minutes of pretty solid material through the point where our crew jumps in the van with Cantwell’s group and another 35 minutes of much rougher” material.

Three additional editors (“Tim Clancy, Cameron Dennis, and Denny Thomas,” Chimples notes) worked to finish the edit in time to air at 7:30 p.m. on Monday, August 14. “In about 30 hours we had turned around three days of some of the most impactful footage of the year,” he says. —JP