To Infinity and Beyond

Housed in the School of Engineering and Applied Science, the Digital Media Design program launched in 1998 to prepare students for careers in computer graphics. The field was racing forward by then, as computer-generated imagery (CGI) became more sophisticated and reached further into video games, movies, and even TV commercials.

Twenty years later, Penn is still training the next generation of computer graphics experts—and while the DMD program only graduates about 25 students a year, many of them go on to work at companies that rule the field.

According to Amy Calhoun C’82, the director of integrated studies programs for the Engineering School, one in 10 technical directors at DreamWorks Animation came from Penn. A significant number of alumni have also landed at Disney, Pixar, Google, Electronic Arts, and Microsoft, and she says that roughly a quarter go into special effects.

To celebrate its double-decade, DMD invited nine alumni to speak at a panel event during Homecoming Weekend in November.

“The coolest thing about DMD is meeting people and the community-building,” said Ray Forziati EAS’04, one of the panelists. “In all three of my entertainment gigs, I’ve had DMD alumni around me. I think I brought in 10-plus DMDers to DreamWorks. I lost count, there were so many. And in my first few days at Netflix, I met three Penn grads and two of them were from DMD. We’re everywhere.”

In addition to Forziati, the panel included alumni who work at Pixar, Instagram, and Etsy; who make their own movies and animations; and who work for Major League Baseball and augmented reality start-ups.

To find out more about DMD’s evolution, Gazette contributor Molly Petrilla C’06 spoke with Calhoun, who has been with the program for 19 of its 20 years.

What’s been the biggest change since DMD started?

In the years before DMD started, the only people who were studying computer graphics were PhD students, because you had to know enough math and enough programming to build all your own tools. Also, the computers that did rendering in the early days were massive and unbelievably expensive. Unless you had access to that kind of computational power, you couldn’t make anything. Now that same computing power is in your cell phone. Today it’s much more feasible for the average person to make animations.

Was it hard to get students interested in the program early on?

Actually, it was pretty easy to find students who were interested. But it was hard to find employers who believed that undergraduates were capable of doing this work because they had only hired people with PhDs up to that point. I would go and visit companies like Pixar and say, “Hey, we have undergraduates who are majoring in graphics,” and they’d say, “Well, what can they do?” The challenge was to convince industry people that you didn’t need a PhD anymore to do this work.

Was there a certain point that you noticed things were beginning to change?

Paul Kanyuk EAS’05 went to do an internship at Pixar his junior year. We knew by midway through the summer that they were going to ask him back. That changed everything. Once you have an undergraduate working at a company like that, then the other companies start to take you seriously.

Around the same time, we had a couple software engineers go off to Disney and other [DMD grads] were breaking through in the games industry. It was around 2004 that we started to see great interest from industry in these kids because of what they could do, their level of enthusiasm, and the fact that they were the same age as the people [those companies] were marketing to.

DMD students take classes in computer science and engineering, fine arts, mathematics, and communications. Those are some very different disciplines for them to toggle between.

In some ways, DMD really is a major about language. When DMD students are in an art class, they have to speak art speak. Then they go off to a communications class, and that definitely has its own lingo. And then they come back to engineering and they’re speaking engineering lingo. That’s been one of their successes out there in the world. They can talk to all of the people who build an animated movie or a game—artists, businessmen, computer graphics people, software engineers. None of those people were trained in the same way and they don’t have any shared language. DMDers learn all of the languages and then they pick the right one for the people they’re talking to. I think that’s as essential as the technical education they receive.

It also sounds like many DMD students stay in touch with the program after they graduate—you know what so many of the alumni are up to.

They do stay in touch. Everybody in DMD feels like they made DMD, so they feel a sense of pride of ownership. Each group adds some new dimension or some new career field that’s opened up. If I were trying to make a major really successful, it would be that: to make each class feel that they built it, they contributed to its success, and they reshaped it to suit their needs.
Any predictions for the future of DMD?

The technology changes so fast that the notion that your curriculum should stay stable is ludicrous. It can’t. Now we have at least 10 people working in VR/AR [virtual reality/augmented reality] and it didn’t even exist as an industry 10 years ago. You have to be willing to change and keep pace with things. And you also don’t know which things are going to take off and which aren’t. When VR and AR first came out, the hardware was so bad that people were like, this isn’t going anywhere. But we thought it would. Now it has the potential to be an incredibly large business.

What DMD will be in 20 years won’t look anything like what DMD is right now except that it will probably have very creative, very engaged students who are interested in changing whatever it is we have now.

Is there something you’d like everyone out there to know about DMD—or maybe a misconception you’d like to clear up?

That it is an engineering degree. It is a technology degree. When you look at the number of graduates who go off and work in all different forms of industry, they are first and foremost engineers who are solving real problems for people in tangible ways.

Each year in admissions selection committee, I see kids who might make great animators but are not going to make great engineers. I want people to know that this is a real marriage between art and science, and you have to be good at both. And most people aren’t. The reason it’s a small program is that it is asking you to be equally skilled with your right brain and your left brain, and most people really are not capable of doing that. It’s a particularly challenging major, and I think it somewhat discredits the amount of work that it took to just think they’re all going to go off and make pretty pictures. 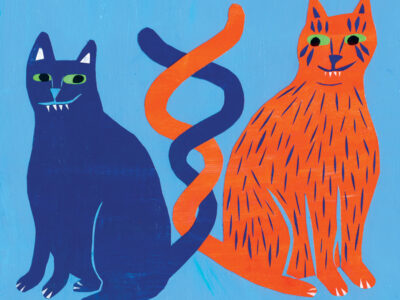