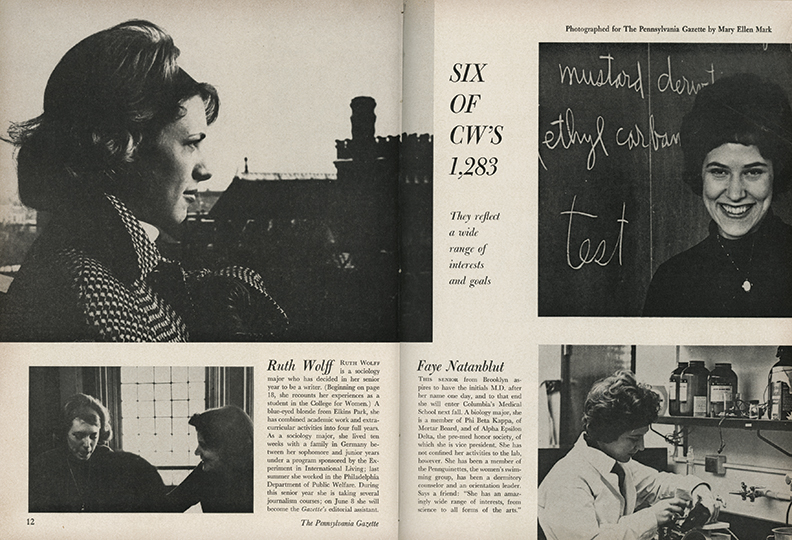 Nineteen-sixty-four marked 30 years since Merle Odgers C’22 Gr’28, first dean of the College for Women, proclaimed “a new deal” for women in Pennsylvania, and the Gazette celebrated the anniversary with a special feature issue (March 1964). Calling it a “full sister school of the College of Arts and Sciences,” editor Robert M. “Dusty” Rhodes wrote: “The future looks bright.”

Out of the 1,283 student body, six women were spotlighted, with portraits taken by then-fledgling photographer Mary Ellen Mark FA’62 ASC’64 Hon’94 . (As a sign of the times, Rhodes noted that he had also assigned Mark to take photos of a football game, but “somebody forgot to tell the Franklin Field guards, who decided to preserve the field as a men-only sanctuary. So Mary Ellen took crowd pictures.”)

The two women shown in the spread here—Ruth Wolff Fields Messersmith CW’64 and Faye Natanblut Laing CW’64—were recently interviewed by Anne Sceia Klein CW’64 ASC’65 for her new book, On the Cusp: The Women of Penn ’64 [“Alumni Profiles,” this issue]. Messersmith, a sociology major, went on to become assistant editor of the Gazette and then received a master’s in public administration, working for the State of California and later California State University. Liang, a biology major, became one of the first radiologists to master an ultrasound machine—“an unwieldly, dinosaur-looking piece of equipment,” as she described it, in Klein’s book.