“A Brood of Sturdy Men”

In the fall of 1952, long before Louise Nevelson’s Atmosphere and Environment XII was rehomed on Shoemaker Green [“Artful Additions”], a 135-foot boom crane lifted a 5,350-pound piece of bronze statuary high over the same area, and brought it down to encircle a steel flagpole. The Korean War was being fought, and Penn had already lost a number of graduates on the front lines. The statue, designed by architect Grant Simon and sculpted by artist Charles Rudy, is titled War Memorial Flagpole, and commemorates University faculty, students, and alumni who lost their lives in military service.

Five somber figures (three male, two female) stand atop a black granite base, surveying Shoemaker Green in all directions. A surrounding limestone and brick wall carries the inscription, “The University of Pennsylvania/ 1740 To Her Sons Who Died in the Service of Their Country 1950/ A Brood of Sturdy Men Who Stood for Freedom and Truth—S. Weir Mitchell, Class of 1848.” The last line comes from a poem by Mitchell, an author, poet, and physician known as the father of American neurology [“The Case of S. Weir Mitchell,” Nov|Dec 2012].

As reported in the Gazette and the Daily Pennsylvanian, the memorial was constructed as part of a $100,000 gift from Walter H. Annenberg W’31 Hon’66 and unveiled by his wife, Lenore Annenberg Hon’85, at a dedication ceremony on November 15, 1952. On that rainy day, which “seemed somehow appropriate to the occasion,” Penn President Harold E. Stassen Hon’48, himself a Navy war veteran, recalled some of the names of early Penn alumni who responded to their country’s call. They included Major General Thomas Mifflin C1760, an aide-de-camp to General George Washington; Richard Peters C1761 G1765 Hon1827, the first secretary of the US Army; and Benjamin Stoddert C1777, the first secretary of the US Navy.

“A University in order to be great needs true academic freedom. It can exist only in a society of free persons,” Stassen told the crowd from beneath an umbrella.

“Nothing could be more appropriate than for our University of Pennsylvania to honor with a tangible memorial its own sons who gave their lives in defense of the freedom of our country,” he continued.

In 1999, after more than four decades of rain, snow, and other harsh weather battered the monument, the War Memorial Flagpole was cleaned and restored with funds raised by the Class of 1943. The restoration was made in memory of Frederick C. Murphy W’43, who was posthumously awarded the Medal of Honor after he was killed in the line of duty in Germany in 1945 [“Alumni Profiles,” Nov|Dec 1998].—NP 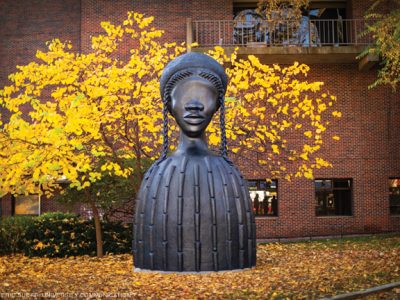