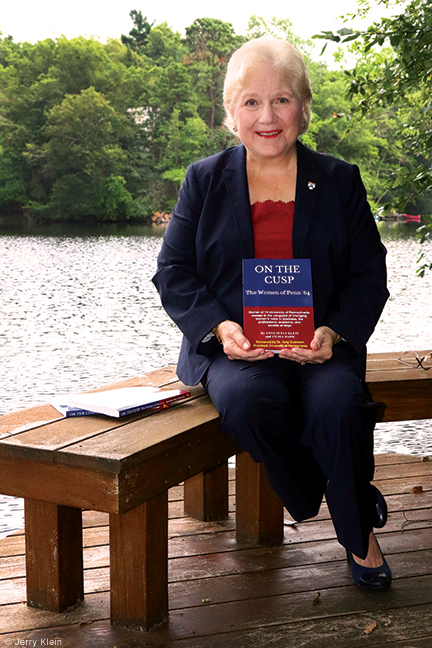 Penn women from the Class of 1964 were on the cusp of history when they entered the workforce.

Fifty years ago, a woman couldn’t run the Boston Marathon, serve on a jury, fight in combat, keep her job if she became pregnant, or open her own credit card account. At Penn, women were not allowed to leave their dorms unless they were wearing skirts or dresses.

“We had to be dressed for the dining room,” recalls Anne Sceia Klein W’64 ASC’65. “When we went to sorority meetings, we had heels on. We could not wear pants to class—that was a no-no.”

“I was furious with him,” she says. “But you can’t let little setbacks, or big setbacks, paralyze you. You have to move on.”

This dogged perseverance is a thread that links the stories in Klein’s new book, On the Cusp: The Women of Penn ’64, cowritten with Vilma Barr and featuring a foreword from Penn President Amy Gutmann. It features interviews with 19 women (Klein included) who went on to become attorneys, computer programmers, architects, doctors, and more, at a time when women’s roles in these professions were changing.

The idea grew out of her 50th Reunion in 2014. As Klein was listening to the struggles of women breaking into typically male-dominated careers, she noted there were no direct paths. “Everybody went sideways to whatever opened up,” she says. “There was no corporate ladder to climb.”

Klein herself went into marketing—her second choice after corporate finance. She was the only woman in all of her classes.

“I thought, ‘Well, I’ll be able to do just about anything’” with this degree, she recalls. “Surprise, surprise.” The majority of recruiting companies that came to Wharton specified “male only” in their job descriptions.

The representative from Penn’s women’s placement program was accustomed to placing nurses and teachers. She took one look at Klein’s marketing degree and said, “‘I don’t know what to do with you,’” remembers Klein, adding that the rep only knew of one woman recruiter in the business realm (her husband had passed away and she was now running the agency). But having just placed a woman at the transportation agency that would later become SEPTA, “that woman hired me and gave me my chance,” Klein explains. “So [the networking] was woman to woman to woman.”

When she left Penn, Klein was full of the confidence and courage that comes with an Ivy League degree. In the business world, however, she was perceived by men as “just a cute kid, not a well-educated woman.” A reporter covering her first news briefing described her as a “pretty blonde hostess presiding over a coffee urn and a pile of press kits.” Klein was momentarily crushed. “That was awful,” she says. “I don’t think the reporter realized how much he demeaned me.”

There was a lot of what Klein calls “attitudinal harassment.” Male colleagues felt women were invading their world—and it turns out, they were right. Constance McNeely Horner CW’64 became the director of the US Office of Personnel; Barbara Schepps Wong CW’64 became a radiologist; Susan Miller Hoffman CW’64 became an IBM systems engineer; Betty Martin Blount Nu’64 GNu’67 became a professor of nursing; and Patricia McLaughlin Nicoson CW’64 became a transportation planner with the DC Department of Transportation, to name a few.

“Our class had a lot of get-up-and-go, and so we just got up and went,” Klein says. “We overcame years of gender discrimination by just working hard.”

A support system was essential, and women found it in their parents, their sorority sisters, and certain open-minded men. “You work hard, you accomplish something, and then suddenly, out of nowhere, men seem to materialize to help you out,” she says. “But they were very few.”

Some female colleagues committed their own kind of harassment, though. Once, while working at an architectural firm, she asked for help from a secretary with “flaming red hair and lots of red lipstick.” The response? “I don’t work for little girls.”

These responses weren’t so much roadblocks as “concrete walls,” says Klein. “What I did was, when I wanted more money, or I wanted a promotion, I just moved to another company. And then another company.” Eventually, she created Anne Klein Communications Group, a public relations consulting firm. That was in 1982.

“I saw there was no professional ladder to climb, so I thought: ‘Well, I’ll start my own business.’”

Last year, Klein retired after 35 years with her company. “But retired?” she asks. “I’ve worked harder on this book than I ever did when I was working.”

She considers it a historical record of stories that need to be told, since many young women today react with disbelief to the blatant discrimination chronicled in On the Cusp. Today’s world has opened up for them.

While some things haven’t changed, and men “still seem to think they’re the big kahunas,” at least “the doors are now open,” she says, adding: “I don’t ever want to see women slip back.” —NP