While today’s students head to the basement of Houston Hall for a bite to eat, at the end of the 19th century, they may have descended the stairs to take a dip in a 10-by-30-foot marble swimming pool, practice gymnastics on a pommel horse, or use a four-lane bowling alley. When it was built 125 years ago, Houston Hall had all of these amenities, and more.

An 1896 booklet advertising the Houston Club gushed, “There are nowhere softer rugs to tread, or more tasteful pictures to admire; no deeper, more comfortable leather chairs.” The building also contained a reading room, a trophy room, a music room, a darkroom, lunch counters, meeting rooms, and auditoriums. Old Penn (the Gazette’s predecessor) kept its office on the third floor.

The Houston Club held activities like bowling, billiards, dances, and swimming exhibitions. Pictured here, world-renowned swim coach George Kistler stands on the diving board instructing a student, circa 1900. Known as the “tank tutor,” Kistler once swam 37 miles from Philadelphia to Chester, Pennsylvania, and back, a trip that purportedly took him 11 hours.

Such a space for community and leisure “is a vital part of the educational apparatus,” proclaimed Provost Charles Custis Harrison C1862 G1865 Hon1911. He had seen the student unions at Cambridge and Oxford and resolved to build the first one on American soil. Harrison organized a design contest and secured funding from Trustee Henry H. Houston and his wife, Sallie S. Houston. The couple pledged $100,000 in honor of their son, Henry H. Houston Jr. C1878, who had died shortly after graduation. Houston Hall gets its name from the younger Henry.

The competition was won by William C. Hays Ar1893 and Milton B. Medary Jr. Ar1894 Hon1927, who presented an H-shaped plan in late English Gothic style. In December 1894 the cornerstone was laid by architect Frank Miles Day Ar1883 Hon1918, and by January 1896, the first students entered its grand front doors.

The building would later be renovated in 1936 by Robert R. McGoodwin Ar1907 GAr1908, who added two majestic wings, and again in 2000 by Venturi, Scott Brown. Last year, Houston Hall underwent a $15 million renovation to spruce up its popular food court, Houston Market, which stands above the ancient pool. —NP 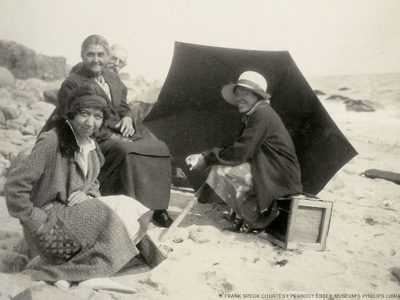