Class of ’71 and ’70 | Since reliable record keeping began in 1880, global sea level has risen by roughly eight inches. It’s projected to rise between one and four more feet by the end of this century. But as a recent National Climate Assessment notes in an understated way: “Projecting future rates of sea level rise is challenging.”

For Albert Slap C’71 and Robert Hubbell W’70, the high stakes of sea-level predictions have led them out of retirement in the Colorado Rockies and into Coastal Risk Consulting (CRC), which provides online flood forecasting for coastal property owners, businesses, governments, and communities. Its motto: “Better information means better decision-making.”

“Coastal Risk Consulting is not in the business of persuading anyone about changing climate conditions,” says Slap, a former public-interest environmental lawyer who founded the company and serves as its president and CEO. “The empirical evidence is there for all to see.” Residents of Norfolk, Virginia; Atlantic City; Miami Beach; and several other US coastal cities are “all too familiar with ‘sunny day flooding’ due to rising sea levels and tidal surges,” he adds, not to mention “other problems such as salt-water incursions into groundwater.”

For those who have built or are contemplating building in coastal areas, “what’s needed is knowledge about where the built environment is going to flood, when it is going to flood, and how deep it will be,” says Slap, who notes that until now, modeling of non-storm flooding has been “slow and expensive.” CRC’s predictions of climate-change impact on real property are based on “enormous amounts of publicly available data and sound science driven by our proprietary algorithms and methodology,” he adds.

The company offers different programs of varying cost and complexity. Its Rapid Assessment Report—an online, 30-year “vulnerability assessment” (flood-prediction) model is available to anyone willing to pony up $49.95 and enter the address of their property on the CRC website (coastalriskconsulting.com). The flooding assessment includes a flood-projection scorecard called First Score, which breaks down the number of projected “nuisance flooding” days in five-year increments. It incorporates data from FEMA, the National Flood Insurance Program, the US Army Corps of Engineers Sea Level Rise Model, and tidal, ground water, and land-subsidence records. (Along the Intracoastal Waterway in Ft. Lauderdale, for example, the number of flood days in 2015-2019 is projected to be between 31 and 43, a figure that rises to 56-136 in the next five-year increment; by 2041-2045, the minimum number of flood days is projected to be 364 and the maximum is 1,414.) Slap calls CRC’s flood-modeling LiDAR technology an “extremely accurate remote sensing method” that has been “peer-reviewed by leading academics in the field of climate science.”

More detailed reports costing $250 to $400 are available, as are custom reports for neighborhoods, communities, business, and government facilities.

When he and Hubbell met last fall, Slap had just launched CRC but had been living in Aspen for the past 10 years. Hubbell had recently retired as a partner and managing director of global communications and marketing for Cantor Fitzgerald, the investment bank, and had moved with his wife to their vacation home in nearby Carbondale.

Though they hadn’t known each other at Penn, they “immediately bonded through our shared Sixties’ Penn experiences and love of tennis,” says Slap.

Hubbell, for his part, says he was “keen to do something new and professionally exciting,” even if he hadn’t anticipated joining a startup in the field of geospatial data analysis. But the more he heard about the company’s “unique value proposition,” the more interested he became. He signed on as vice president for marketing.

“Knowing the risk of a property’s flooding over a 30-year mortgage cycle is priceless information,” he explains. In addition to helping someone decide whether they should buy a property in the first place, a CRC report “reliably identifies that risk so that owners and investors can consider the steps they might take to assess the implications for their economic value, and remediate their property’s inherent characteristics to adapt to inevitable flooding.”

Slap says that when he realized that the analytical geospatial reports produced by CRC’s scientists could be automated, he saw that it could quickly go from a “cottage-industry approach” to a “technology-driven service business,” one that has “democratized” the publicly available information.

“I think success in litigation comes from seeing the big picture and connecting the dots,” he says. “My greatest enjoyment as a lawyer over 40 years was working with experts in diverse fields of science and technology.” That habit of collaboration “proved a great basis for assembling CRC’s team of scientific experts,” which is led by the University of Miami’s Brian Soden, a lead author of the Intergovernmental Panel on Climate Change; and Florida Atlantic University’s Leonard Berry, a principal author of the US National Climate Assessment.

These days, CRC is raising venture capital in order to automate the geospatial modeling process using cloud computing, Slap and Hubbell say. In addition to their work with early municipal clients like the City of Miami, which helped validate their methodology and services, and more recent projects for nuclear power stations and a military airfield, they have endorsements from clients who own properties in sites ranging from Boca Raton to Long Beach Island.

“We provide better information about future flooding,” says Slap. “What an individual, community, government, or business decides to do with that information is completely up to them.” Of course, if they want further advice about preparing for future climate impacts, “CRC’s team of environmental experts can help.” —S.H. 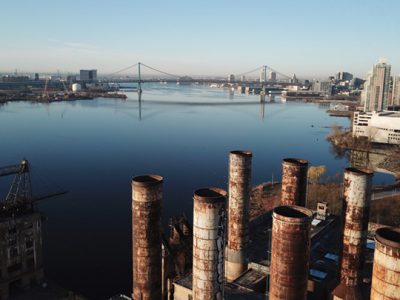 Gazetteer
Water Everywhere, For Everyone