That’s been the question ever since it became clear that Penn’s longest-serving president, Amy Gutmann Hon’22, would be leaving her post by June 30, 2022. (In the event, she departed in February after being confirmed as US ambassador to Germany.) A related question—“who’s next?”—was answered with the nomination in January, confirmed by the board of trustees in March, of University of Virginia Provost and Executive Vice President M. Elizabeth “Liz” Magill. Since then, Magill has been at work getting to know Penn and charting the University’s path forward.

The title of our cover story, “Liz Magill Is Listening (in a Good Way),” gives some idea of her inclusive and collaborative approach to that task. The article traces Magill’s biography from childhood in Fargo, North Dakota, to college at Yale and law school at the University of Virginia, and positions of increasing responsibility at UVA and Stanford, along with offering insights from search committee members and former colleagues and Magill’s own thoughts on leadership. (She has more to say in her first “From College Hall” column.)

Interest in what’s next—the future—isn’t limited to Penn, of course. A company called Good Judgment Inc. offers predictions on a myriad of issues in politics, international relations, economics, public health, and more, which it provides for a fee to clients and shares freely on a website that doubles as a recruitment tool for “Superforecasters”—curious generalists with open minds who mostly do a significantly better job than the experts in any given field.

The company was founded by Philip Tetlock and Barbara Mellers, Penn Integrates Knowledge professors in psychology and management, as an outgrowth of the Good Judgment Project, the name they gave to their team in a forecasting tournament designed to improve US intelligence—which quickly eliminated the competition from other universities, and even beat out the agency’s own analysts. Alyson Krueger C’07 has the answers in “Getting It Right(er).”

One of the first images posted to President Magill’s Instagram account showed her at Independence Park, recalling a family visit in 1976. She may already be familiar with the Mütter Museum, Barnes Foundation, and Rosenbach museum and library, but JoAnn Greco’s “Museum Men” will help any visitor look with fresh eyes on these iconic Philadelphia institutions.

The article includes biographical sketches of Thomas Mütter M1831, the dandyish innovator of surgical techniques and collector of oddities; cantankerous chemist turned art collector and theorist Albert Barnes M1892; and the flamboyant, risk-taking book dealer A. S. W. Rosenbach C1898 Gr1901, along with interviews with experts familiar with their contributions and historical impact.

I hope Dan Rottenberg C’64 will forgive me for calling him an institution, too, but the title of his memoir—Education of a Journalist: My Seventy Years on the Frontiers of Free Speech—nods pretty forcefully in that direction. And as associate editor Dave Zeitlin C’03’s portrait, “Professional Contrarian,” shows, he’s still at work pursuing various projects.

Rottenberg’s career spans from the heyday of consumer magazines through the alternative weekly scene of the ’70s and ’80s and into the digital recent past and present. On that subject, he’s a fan of online publishing but a decided skeptic when it comes to social media—even though his free weekly, the Welcomat, bore a more than passing resemblance to the welter of competing voices on today’s internet. The key difference, apparently, being that Dan was the gatekeeper back in the day, and now, well … 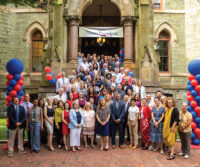 Liz Magill Is Listening (in a Good Way)