Water Everywhere, For Everyone

The Water Center at Penn addresses inequities throughout the region and country.

Millions of people in New York, New Jersey, and Pennsylvania regularly turn to the Delaware River for recreation, whether it’s tubing in Bucks County, hiking in the Catskills, or sunbathing in Cape May where the river empties into the Delaware Bay. Yet millions of others aren’t able to take advantage of such assets, and they can’t even enjoy the river as it winds through their own neighborhoods because it remains cut off by busy highways, industrial wastelands, or overgrown shorelines.

To paraphrase the old poem—water, water is everywhere but there’s nary a drop in which to swim, or boat, or fish for those who live by the 27-mile stretch of the Delaware that flows by cities like Philadelphia, Camden, and Chester.

“Why shouldn’t downstream urban residents have a clean river that they can enjoy just as their more affluent neighbors do?” asks Andrew Kricun, a senior advisor at The Water Center at Penn, whose mission is to encourage solutions to global water challenges. Kricun—who previously served as executive director of the Camden County Municipal Utilities Authority and is on the New Jersey Environmental Justice Advisory Council—is part of a team that is collecting and analyzing data on the limiting factors to achieving “swimmable” conditions in the urban sections of the river.

Kricun says equity lies at the heart of this and many other water issues facing the US. “The good news about the water sector is that we don’t need some undiscovered or untapped technology,” he says. “Best practices already exist. … Our goal at The Water Center is to identify the low-cost, low-hanging fruit—interventions like planting rain gardens to soak up stormwater or installing netting to capture debris from sewer overflows—that can ensure clean water in affordable ways that don’t result in rate increases.”

Healthy watersheds are essential for many other aspects of daily living aside from recreation, of course. A glance at the list of threats that the World Economic Forum predicts we’ll all be facing in the next decade reveals that several, including extreme weather, climate action failure, natural disasters, and biodiversity loss, are directly associated with water. Plus, about 10 percent of the world’s population still lacks reliable access to basic drinking water, according to the World Health Organization. Problems with potable water even occasionally plague Americans, and one Water Center project examined the issues that caused the water failures in Flint, Michigan—while determining whether similar conditions exist in other post-industrial and economically challenged cities in the Great Lakes region.

When former Philadelphia Water Department Commissioner Howard Neukrug CE’78 launched the Water Center in 2018, he spoke with “a lot of different people [and] ended up with the concept of water as the universal connector,” he says. “It touches upon everything from climate change to failing infrastructure.” Thanks to those hot-button issues, Neukrug says, awareness has grown about the importance of ensuring universal access to clean and safe water. “So, even though the problems continue to grow, I no longer have to explain what a watershed is,” he adds. (It’s the origin point of a water system, the spot that channels rainfall and snowmelt through waterways and eventually into reservoirs.)

Coming from a background in urban water systems, Neukrug decided to make cities his focus. In less than three years, the center has completed 10 projects, including two sponsored by the Heinz Foundation that involve efforts around metropolitan Pittsburgh. The first provided an assessment of the challenges and opportunities for the city to improve the quality of and access to its water resources for all constituents; the other offered recommendations on ensuring a safe, sustainable water distribution system for the financially distressed, shrinking city of Duquesne.

Small municipalities are particularly strained when it comes to technical assistance and funding options, observes Karl Russek, director of programs and applied research at the Water Center. “So many of the communities that are experiencing the most significant effects of inadequate access to water and regular flooding tend to be poor cities,” he says. “Just filling out the applications for state funds can cost tens of thousands of dollars, not to mention the manpower, time, and expertise they involve. But if these cities miss out on addressing flooding issues, say, there’s further erosion, property values go down, and the tax base decreases. It just accelerates the cycle.” He’s currently leading a team that will produce a “Local Decision Makers Guide” aimed at easing the path. “Our goal is to produce a document that basically sits local officials down and lays everything out for them,” he says. “You have these problems, here are the programs that can help you. Here’s how to collect the information they require, and here’s where to send it.”

Russek is an example of the newer breed of experts that the Water Center is attracting. Unlike Kricun and Neukrug, he isn’t an engineer nor does he have a background in public utilities. He studied water restoration at the University of Alaska and then spent more than two decades in environmental underwriting—assessing natural resource damage, risks, and industry/regulatory issues—before arriving at Penn to pursue a master’s in environmental studies. Meg Kramer LPS’18, the center’s director of strategic development, came to Penn for the same degree following a career in pharmaceutical marketing. And Erica DePalma LPS’20 joined the center as its research program coordinator while focusing her studies on hydrology. She’s already assumed lead roles in projects related to West Philadelphia’s Cobbs Creek and South Bend, Indiana.

One of the Water Center’s four primary objectives is to attract and support the next generation of water leaders, Neukrug says. “The issues around water go much further than the concerns of a utility, which delivers water and service,” he observes. “They bring into play things like green infrastructure, community outreach, education and equity, and the design and landscape of cities. It’s a real change for the industry and it happens to hit squarely with the types of projects that today’s graduates—whether they’re just entering the workforce or whether they’re looking for a complete career change—like to work on. We’re getting people that didn’t used to come into the water business, and they’re coming with ideas and excitement.” —JoAnn Greco 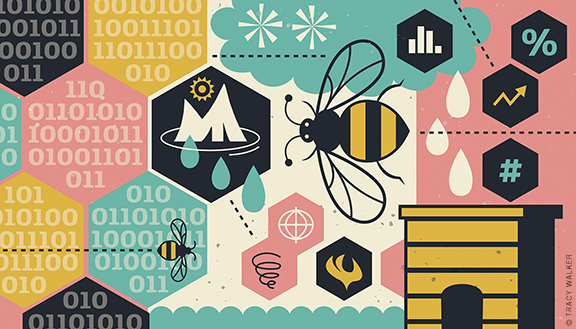