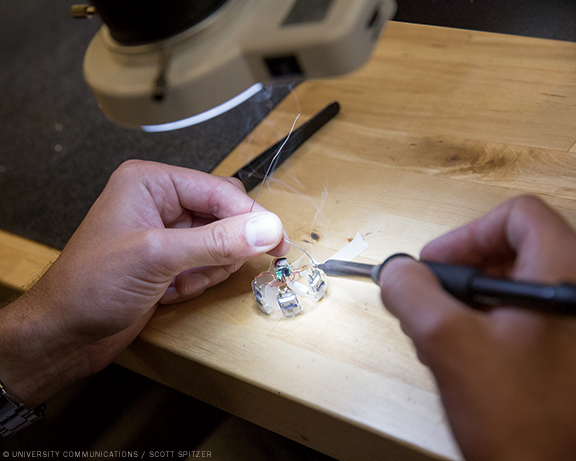 “One of the funny things about this guy,” he said, stooping over a circular device barely big enough to cover a US quarter, “is that the power switch is so small, I need to turn it on with a knife.”

With a surgeon’s precision, he toggled the switch with the tip of the blade, and then pointed an infrared flashlight at a photo detector mounted on his two-and-a-half-gram aircraft. As he slid a button along the side of his remote control—causing the flashlight to strobe at an accelerating rate—Mini Piccolissimo spun like a whirling dervish, faster and faster until it lifted off the table, where it hovered in the air until its creator killed the flashlight and let the drone drop into his palm.

Though drone design is a rapidly expanding field with global scope (including, no doubt, classified research and development), Mini Piccolissimo appears to hold the current title of smallest airborne robot that carries its energy source—three tiny lithium batteries—on board. It can only move up or down, but its ever-so-slightly bigger brother, Manueverable Piccolissimo (whose diameter matches that of a silver dollar) can be steered in any direction. Piccoli commands that one with a TV remote control. “When we’re telling Maneuverable Piccolissimo to fly around,” the amiable, down-to-earth roboticist explains, “we’re literally saying, volume up, volume down, channel up, channel down, that kind of thing.”

Both drones are the outgrowth of work Piccoli has pursued under the mentorship of Mark Yim, a professor of mechanical engineering and applied mechanics and the director of Penn’s Integrated Product Design program [“Digital Natives in Tomorrow’s Classroom,” Nov|Dec 2007].

An early model, measuring 14 inches across, was made out of insulation foam from Home Depot. The Piccolissimos were 3-D printed in the engineering school’s AddLab. They share a common design: a single propeller mounted beneath a cylindrical assembly of airfoils that resemble curved, finlike spokes of a wheel. The propeller spins in one direction while the body spins in the other, creating conditions for passive stabilization—another way of saying that the drone naturally orients its thrust in the opposite direction of gravity. The drones are also gyroscopes, which enables them to keep track of their position in space. The spinning nature of their flight offers advantages for certain types of data collection.

“So you can take something that scans in a line, and then spin it around, and you get a 360-degree panorama,” Piccoli explains, noting that radar works in this fashion.

Piccolissimo played a star turn in Piccoli’s dissertation defense, which ended successfully. But the roboticist won’t be taking his tiny flying robots very far. He’s launching a startup that will set up shop downstairs from his current space in the Pennovation Center’s Penn Engineering Research and Collaboration Hub.

“Interestingly, I’m going to get an office, but it’s actually the mailroom,” he confides with a laugh. “So it’s kind of squirreled away in a little corner. But it has a door that I can lock, and room for two desks, and I got an okay price on it!” The company’s name? “It’s IQnetics,” Picolli says—“spelled I-Q, like, ‘we’re smart.’” —TP