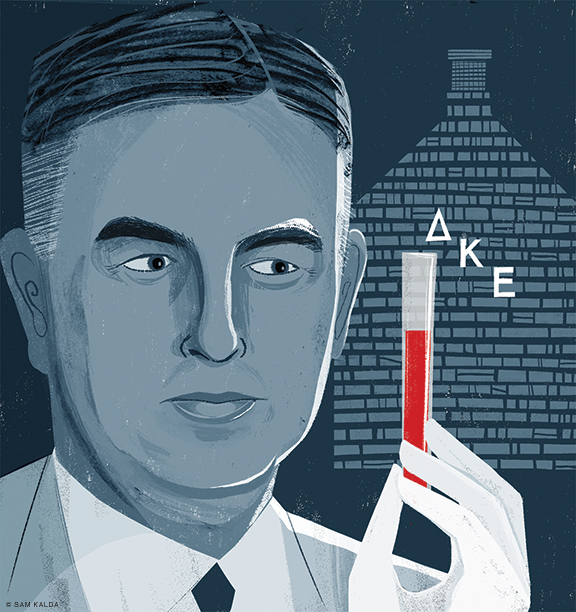 [Editor’s note: While researching a paper on the origins of gamma globulin therapy, Will Schupmann C’17 examined the Joseph Stokes (M’20) Papers, a 252-box archive housed at the American Philosophical Society. In it he uncovered documentary evidence of the following all-but-forgotten episode of campus history.]

The stone and brick building at 307 South 39th Street is familiar to several generations of Penn undergraduates as the Delta Kappa Epsilon fraternity house. Since the 1940s, it has served as the home of hundreds of DKE fraternity brothers. During World War II, however, it served an entirely different purpose. Between November 1944 and February 1946, Joseph Stokes, Jr. M’20, a Penn professor and physician-in-chief of the Children’s Hospital of Philadelphia, converted it into an isolation ward for human experimentation.

The DKE house’s role in wartime medical research had its genesis in the 1941 establishment of a civilian Board for the Investigation and Control of Influenza and Other Epidemic Diseases in the Army. As the US prepared to enter World War II, the military knew its troops were at risk of contracting infectious diseases. The Army created seven commissions within the Board, one of which was the Commission on Measles, led by Stokes. Stokes was a prominent physician researcher. In addition to his leadership role at CHOP, he also helped to develop vaccines for influenza, measles, mumps, infectious hepatitis, and polio.

Despite his commission’s name, Stokes’s team focused mostly on infectious hepatitis (known today as hepatitis A), an enormous problem among troops in the Mediterranean. In July 1944, the University of Pennsylvania received $50,000 from the War Department to serve as a center for studying the hepatitis virus’s mode of transmission, potential methods to destroy it, and ways of preventing symptoms.

Stokes received authorization from the Surgeon General of the Army to use 35 conscientious objectors (COs), individuals who refused to join the military due to religious or moral beliefs, in these studies.

While it is unclear how the majority of them felt about participating in the Commission’s experiments—some of which involved considerable risk—there are records of how some individuals responded. One wrote that he desired “an opportunity to perform some service which is humanitarian and I feel this is an opportunity.” At least three others asked to be transferred to the “Philadelphia Jaundice experiment.” Whatever the case, the use of COs as subjects was ethically troublesome, as their refusal to participate in the military would be used to coerce them to take part in experiments. Stokes’s studies were particularly concerning, as they involved deliberately infecting COs with the hepatitis virus, which was known to be dangerous.

On December 26, 1944, the first five COs moved into DKE, where they would live for the duration of the experiments. Stokes’s team inoculated them with the “Akiba throat washings pool,” which was a stock of liquid obtained from children’s throats during an outbreak at a boys and girls summer camp, Camp Akiba, several months earlier. The researchers wrote:

3 cc. was instilled into each nostril and was kept in the nasopharynx for one to two minutes by holding the head well back with the subjects laying in the dorsal recumbent position on the table. The excess was then swallowed … 25 cc. was then placed in a glass and diluted with milk, the mixture being ingested orally … The five men were then placed in isolation …

Over the next year, the COs in the DKE house participated in studies investigating the use of gamma globulin (a blood product containing antibodies) as a preventive treatment; whether the virus responsible for hepatitis was water-borne; and whether chlorination of water destroyed the virus. This third objective was the focus of a particularly nauseating experiment. Stokes and his colleagues had discovered that the agent of hepatitis was present in the feces of individuals with the disease, and they believed that the fecal contamination of water or food could be a mode of transmission. In an attempt to test whether chlorine could inactivate the agent, Stokes contaminated the water with feces from children at Camp Akiba, using a Waring blender to create a “10% suspension of the original solid feces.” He proved this preparation contained the “hepatitis producing agent” by feeding it to two “volunteers” who later contracted the disease. His team then administered chlorine-treated contaminated water to five COs and untreated contaminated water to another five. According to Stokes, the men “stated that there was a slight taste to the water resembling that of pond or musty water but that it was not especially bad and none of the men required a ‘chaser.’” As it turned out, two individuals from both groups contracted hepatitis, suggesting that chlorine was not an effective method of inactivating the virus.

The studies in the house grew. In 1945, as many as 46 men lived in the DKE house. This attracted some outside attention. In February, Stokes’s colleague S. Bayne-Jones received a letter from one G. D. Fairbairn, of the Evening Bulletin, asking permission to write about the COs participating in the experiments. In granting it, Bayne-Jones expressed hope “that in the preparation of this story the writer will maintain a moderate tone, and that exaggeration of the facts will be avoided.” He added, “May I suggest that the term ‘guinea pigs’ for these volunteers is undignified, hackneyed, threadbare and hardly appropriate. I hope you can find a more fitting term for these men.”

Life for the COs was highly regulated, and space was tight; tensions began to run high. In a memo to the research team, S. Bayne-Jones wrote:

The enlarging of the unit will entail doubling up in single rooms, and the use of the large dormitory room on the third floor as a general sleeping quarters. This dormitory will have to hold a minimum of twelve or thirteen men. The increased bed space can be attained by the use of double decker beds of which I believe the university has an ample supply … A small infirmary can be made out of a large room on the third floor. Here we can keep four bed-ridden men and possibly do all the blood work. If it is undesirable to do the blood work in such close quarters with men who are ill, there should not be any reason why the large downstairs living room could not be used … If the third floor is going to have another isolation group of five, there will be no toilet for sixteen other men living on that floor … Group tension, because of closer living will be on the increase.

Several months after the experiments had begun, a different sort of problem arose: the DKE house began attracting flies. Investigators were concerned that they could transmit hepatitis and wanted to prevent the insects from jeopardizing the studies. In response, the researchers treated the house with 240 gallons of the pesticide DDT. They calculated that “40 gallons would be required per treatment of the walls, ceilings, and window screens of the building and that you would give the premises six treatments during this season. This residual spray is a five percent solution of DDT in kerosene. Its use is accompanied by a certain amount of fire hazard.” Such a large amount of DDT, a flammable insecticide, made living conditions in the house toxic and dangerous.

The experiments at the DKE house were completed by the end of February 1946. Fred Davis W1915, an alumni representative of the DKE fraternity, surveyed the house once Stokes’s team and the COs had vacated. He found a great deal of damage. The house was missing three study desks, one small table, six desk lamps, eleven pillows, six waste baskets, one ping pong table, three floor lamp reflectors, one table lamp reflector, six shades, and one wall light. Furthermore, holes were found in the game room ceiling, kitchen, and basement storage room where “pipes and electrical wiring were installed for special equipment.” Last but not least, Davis found “two very big burns in the floor of the living room which evidently were the result of the burning of the disinfectant [presumably the DDT] in the house.”

The paper trail on this astounding use of the DKE house appears to end with Davis’s account of the destruction. None of the participants in the studies seemed to have died as a direct result, although several of them did experience severe symptoms. In fact, three men who contracted hepatitis during the course of the studies continued to experience symptoms after February of 1946, and their fates are unknown. Joseph Stokes was awarded the Medal of Freedom by President Truman for his work on hepatitis. From today’s perspective, however, these studies will probably receive the condemnation leveled at similar experiments, such as the infamous Willowbrook hepatitis studies, in which intellectually disabled children were also fed fecal matter containing hepatitis. As for the fraternity, one can only wonder if the members who moved back in after the war knew about the peculiar brotherhood experienced by the men who had immediately preceded them. 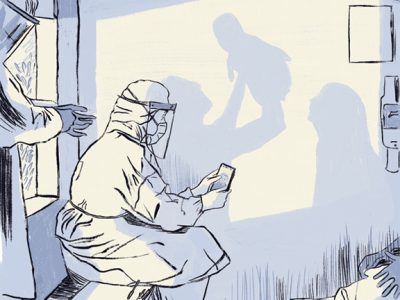