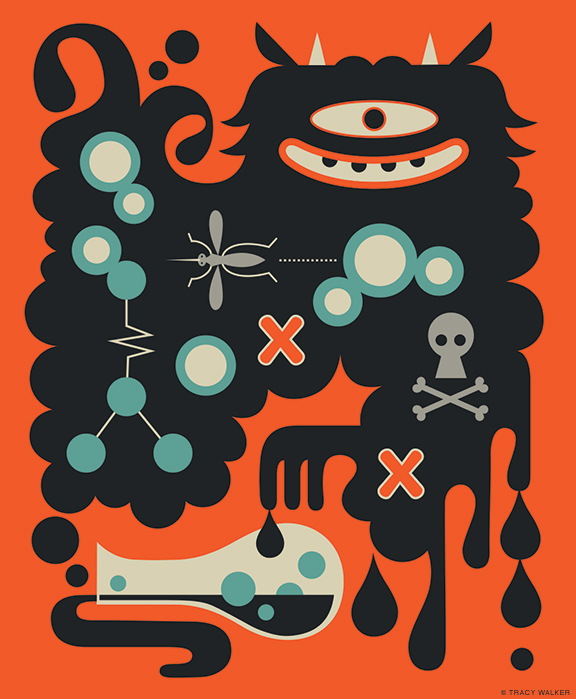 Paul Offit can reel off in a quick paragraph just what it took for him and his colleagues at Children’s Hospital of Philadelphia and the Wistar Institute to invent a vaccine for rotavirus, a disease that causes severe, and often deadly, diarrhea in infants and small children.

“You finally get something that works in mice—all right!” he begins. “But that’s not really the goal. The goal is to create a human vaccine. So then you put it in adults, then in children who have already been exposed, then in children who haven’t been exposed, then in larger numbers of them. Then you do a trial—for us, that was 72,000 children in 11 countries in four years. You prove that what works in mice seems to work in people. You’re still nervous because now you know it’s about to be put in millions of people. And you don’t know [how it will play out]. You just don’t know.”

Offit’s experience in the high stakes and painstaking work of vaccine development informs many of his books, which bear titles like False Prophets: Bad Science, Risky Medicine, and the Search for a Cure and Do You Believe in Magic?: The Sense and Nonsense of Alternative Medicine. Along related lines, his newest, Pandora’s Lab: Seven Stories of Science Gone Wrong, explores (mostly) well-meaning inventions, notions, and crusades that relied on poor science and wound up having unintended and often disastrous consequences.

Always, the goal is to help people better appreciate the field—and the limitations of its practitioners.

“Scientists get it wrong all the time,” says Offit, the Maurice R. Hilleman Professor of Vaccinology and pediatrics professor at the Perelman School of Medicine, as well as the director of the Vaccine Education Center at the Children’s Hospital of Philadelphia. “That’s the process of experimentation: it’s mutable and changing. Science doesn’t get it wrong. It gets it right—even if it takes years.” But some scientists—especially those who have enjoyed tremendous success and accolades—can fall prey to a “belief system,” he says. “Science isn’t a belief system, though; it’s evidence-based. Religion is faith-based.”

Offit calls this “Nobel Disease,” and as Pandora’s Lab details in entertaining and often jaw-dropping fashion, things go seriously wrong when a scientist gets (his own) religion. Consider Linus Pauling, two-time Nobel laureate and enough of a genius that Albert Einstein declared his description of chemical bonding as “too complicated for me.” After becoming convinced of the life-enhancing merits of megadoses of vitamin C, Pauling moved away from traditional science. His first book, 1970’s Vitamin C and the Common Cold, convinced 50 million Americans to follow his regimen; emboldened, he went on to claim that vitamin C also prevented cancer. Eventually—and disturbingly—study after study revealed that overconsumption of many vitamins actually led to increased incidences of a variety of cancers.

“Every claim, independent of … reputation, should stand on a mountain of evidence,” writes Offit. “No one should get a free pass.”

The same lesson applies to the most surprising inclusion in Offit’s rogues gallery: Rachel Carson, author of the best-selling 1962 book Silent Spring, widely credited with jump-starting the environmental movement.

“That was the hardest chapter for me to write,” Offit admits, “and it’s the one that’s resulted in the most pushback. Yes, Carson was a hero, but I also think she did real harm.” At the time the most celebrated science writer in America, Carson presented a powerfully worded case against using chemicals, including the pesticide DDT, on crops. But soon the substance was banned for all uses, including controlling mosquitoes. “In Sri Lanka, before the use of DDT, 2.8 million people suffered from malaria,” Offit writes. “When the spraying stopped in 1964, only 17 people suffered from the disease. Then, between 1968 and 1970, no longer able to use DDT, Sri Lanka suffered a massive malaria epidemic—1.5 million people were infected by the parasite.” (In 2006, the World Health Organization reinstated DDT as a pesticide for the control of malaria.)

Another narrative centers on the saga of the German Nobel Prize-winning chemist Fritz Haber (1868–1934), who invented a process to synthesize ammonia from hydrogen and nitrogen. This enabled the production of synthetic fertilizer that helped produce more crops to feed a rapidly growing population. Today, though, ammonia fertilizer runoff washes into our waterways, causing algal blooms that kill marine life. In an unsettling coda, we also learn that this man, operating in the service of the fatherland, went on to develop chemical weapons like chlorine and mustard gases, and that his work led to the development of Zyklon B, a variation on a pesticide that was used by the Nazis to kill about one million Jews out of the six million murdered in the Holocaust.

There’s also a chapter on America’s own attempts at creating a master race. Offit traces the progress of an early 20th-century eugenics movement that resulted in the sterilization of some 65,000 insane, deformed, and alcoholic Americans. We meet Madison Grant (1865–1937), a lawyer and celebrated conservationist who felt beleaguered by the changes happening around him in New York as immigrants crowded the streets. In 1925, he took the eugenics idea and ran with it, publishing The Passing of the Great Race, which none other than Adolf Hitler praised as “my bible.” The lesson here, writes Offit, is to “beware the zeitgeist.” Offit says this chapter is the most frightening “because we haven’t learned anything. The ideal of racial purity didn’t start at a rallying stand in Munich; it started in a law office in New York.”

Perhaps the most horrific of stories, though, comes courtesy of Walter Freeman M’20 (1895–1972), who improved on the already brutal and destructive lobotomy by inventing an “ice pick” method, which purported to cure mental disorders by hammering an ordinary kitchen implement into the corners of the eyes, turning the severance of the brain’s frontal lobes into a six-minute outpatient procedure. “Beware the quick fix,” cautions Offit, drawing a parallel to today’s rash of quack theories (including avoiding vaccines) presented as “cures” for the mysteries of autism.

Offit opens the book by detailing the tortured cycle of solutions that have been offered to help manage another common health problem—heart disease. Mid-century panic over cholesterol and saturated fats led to the manufacture of trans fats, such as the partially hydrogenated vegetable oil found in margarine. By the mid-1970s, Americans consumed three times as much margarine as butter. But by 2006, an article in the New England Journal of Medicine proclaimed that on a per calorie basis, “trans fats appear to increase the risk of coronary disease more than any other macronutrient.”

These kinds of stories are the most frustrating to Offit. “We’re dogmatic at each step before finally figuring them out,” he says. (Trans fats have been eliminated from many packaged foods and banned in restaurants around the world.)

Offit points out that in all of these cases, doubters have raised red flags. But often they aren’t heard—at least not at first.

“We want to believe in magic,” he says. For today’s consumers, the lessons of skepticism apply: wait for all of the data to be released, don’t fall for quick fixes, and remember that the truth emerges over time.

“But,” Offit adds, “it’s also important not to cross the line into cynicism—where it’s all about what ‘they’ don’t want you to know or what ‘they’ won’t tell you.”

“I’d like the main takeaway to be that everything has a price,” Offit concludes. “It’s just that the benefits have to outweigh the risks. There’s no harm in, say, removing plastic from a toy because you’re afraid of BPA. But there is harm in not giving a child a vaccine.”