Stars in Their Eyes 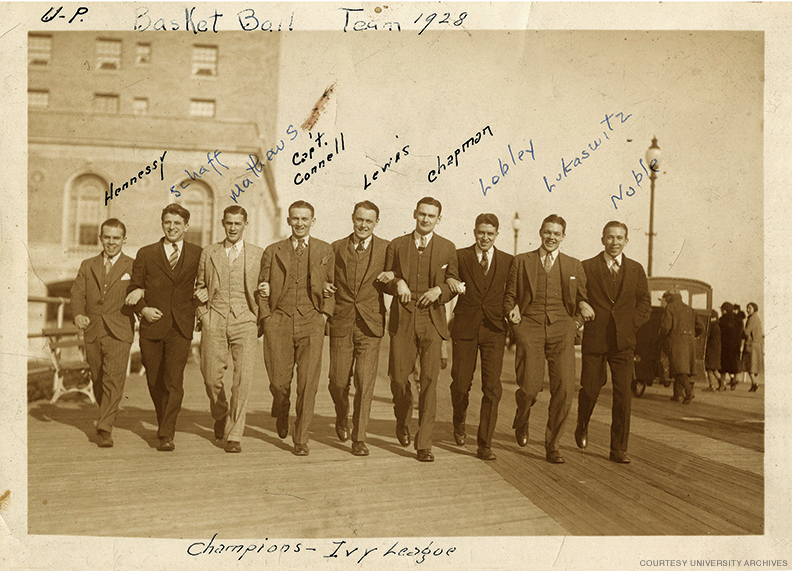 When the Penn men’s basketball team claimed a share of the Ivy League Championship this year, it marked the program’s first title in more than a decade. Another championship was won 90 years ago when, as a member of the Eastern Intercollegiate League, Penn snatched the title back after a seven-year lull.

On March 20, 1928, the Quakers narrowly added a seventh League trophy to their case with a 24–22 victory over Princeton at the Palestra. This photo shows the team all gussied up, likely celebrating their victory, on a boardwalk in New Jersey.

An article in the March 23, 1928, edition of The Pennsylvania Gazette describes the tension felt on game night: “A crowd of approximately 10,000 spectators, which filled the great indoor stadium to capacity, saw the championship contenders battle grimly through forty minutes of the closest kind of play. With the score tied at 22 all and with but four minutes left to go, they watched Don Noble [W’29], a bespectacled substitute, arch a long toss which dropped through the net and scored the field goal which settled the issue.”

Senior Eugene “Gene” Connell W’28 L’31 had been captain that season, and the team unanimously elected Joseph George Schaaf W’29 (misspelled in the photo) to lead the upcoming 1928–29 season. The Gazette called Schaaf a “phenomenal goalshooter,” while The Pennsyvlanian referred to him as “the Red and Blue scoring ace.” A Delta Sigma Phi member from working-class Kensington, Schaaf had participated in all 27 games that season, scoring a total of 136 points in 11 League games and demolishing a previous record. He was subsequently awarded the Dan and Murray Elgart trophy, given to “Pennsylvania athletes of unusual ability.”

As for Connell, the center forward was also a catcher on the baseball team, and when he left Penn, he went on to play baseball in New England. On the Fourth of July 1931, he made his debut with the Philadelphia Phillies, playing six games as catcher before moving on to coal mining with his brother in the Connell Coal Company. Sadly, Connell was killed in a car crash when he was just 30 years old. But this picture forever captures a day when he and his team had stars in their eyes. —NP